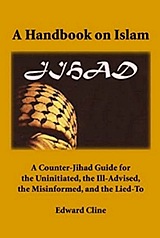 By now, I hope our readers are collecting a library of necessary books on Islam in all its stunted unvarying horror. It is imperative to know the truth — even if learning it makes you miserable at first — in order for your children and our culture to survive.

Thus, we have Edward Cline’s newest offering on Islam. This latest one, A Handbook on Islam

, is so new it contains Bosch Fawstin’s prize-winning illustration.

The [edited] editorial on the Amazon page [with my emphasis —D] explains the raison d’être for this brand new Kindle book:

, which was published by the Voltaire Press in 2014. The latter title offers a chronicle of terrorist acts committed since 9/11, which, as of the date of this writing, have neared 26,000 separate and deadly attacks of varying magnitudes. These attacks are now commonplace and are occurring daily, chiefly in the Mideast and in Africa, committed by ISIS (or ‘ISIL,” or the “Islamic State”), which has established beachheads in Libya and in Nigeria and in other unstable countries in that region. “Outbreaks” of Islamic terrorism – or Islamic mob rule – are occurring in the Far East in Pakistan and Afghanistan, when Islamic fundamentalists not necessarily connected with ISIS or Al-Qaeda persecute or slaughter Christians or target individuals for execution. Attacks continue in Europe and in the U.S., ostensively in “retaliation” for drawing images of Mohammad, the alleged prophet of Islam. In early January 7th 2015 Saïd and Chérif Kouachi, forced their way into the Paris offices of Charlie Hebdo, the French weekly satirical newspaper, and killed eleven of the staff, and later killed a French police officer who was directing traffic. Following that, more attacks occurred in other regions of France. In the U.S., Pamela Geller’s Draw Mohammad contest and event in Garland, Texas, on May 3rd 2015 was attacked by two Muslim “extremists” armed with automatic weapons; the gunmen made it only as far as the building’s parking lot before being shot dead by a single policeman.

And, more than a supplementary guide, the author thought it a necessary work to help counteract the mainstream media’s refusal, inability, or unwillingness to grasp the perilous seriousness of the ends and means of Islamic terrorism and terrorist acts committed in the U.S. and abroad.

[Finding myself ever more frequently in the paranoid seat, I hope the author assures us it was his typo in the first sentence, and not the Amazon gremlins who messed up his editorial blurb. Ever since Mr. Bezos bought The Washington Post I’ve been looking at the books sections with a jaundiced eye. For this “culture” in which America currently wallows, paranoia is a healthy response.]

At any rate, both books are worth your time. Mr. Cline, being a gentleman and a scholar, has written a number of other books, some of which are here.

Looking at that page, you can see that Mr. Cline is a prolific writer. Choose from his Sparrowhawk series, set in the Revolutionary War era, or for fans of hard-boiled noir detective novels, there is his Cyrus Skeen mystery series to ponder. A veritable chocolate box laid before you.

For those of our readers whose avocation is pulling them toward building their own writing skills, both series are worth studying. As in, the more you read, the more can you write fluently.

And last but not least, Edward Cline was one of Diana West’s staunch defenders, which proves he has an astute understanding of the wiles and guiles of internecine warfare.