The spot on Svanevej in Copenhagen where police shot Omar el-Hussein to death last Sunday morning has become a place of pilgrimage for “Danish” Muslims. “Youths” from the surrounding area have vowed to return to the spot every Friday and pray for their departed comrade.

Many thanks to Liberty DK for translating this article from Jyllands-Posten:

Every Friday from now on we will pray for Omar

Monday’s unofficial commemoration of the alleged assailant, Omar Abdel Hamid el-Hussein, escalated in a very short time. Every Friday from now prayers will be said for him. 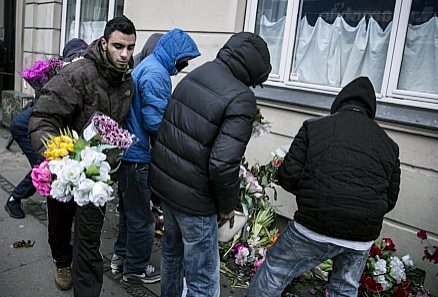 On the note Bilal Gurleyek writes that this place will be a meeting place for the country’s many Muslims.

“I put a great distance between myself and his actions, and I have a big problem with Islamists. But I have come here today because he was born a Muslim, and he died as a Muslim and as a Muslim I feel it is my duty to come here and pray for him,” says Bilal Gurleyek who knew the presumed perpetrator, and who will now start a new tradition in Nørrebro’s Northwest district of Copenhagen:

We will not distance ourselves

Throughout the whole day the street was teeming with journalists, police and local residents. Some of those present knew the alleged offender, while others just came by to show support for the family of the deceased.

While the vast majority of observers whom Jyllands-Posten spoke with during the day took strong exception to Saturday’s terrorist act, there were other attendees who explicitly did not want to distance themselves from the act:

“Why don’t you distance yourselves from Jews who kill our children and rape our women in Palestine? Why should we Muslims distance ourselves?” said one of those present to Jyllands-Posten before continuing with raised voice and big arm movements, until he finally was yelling very loudly:

“We will not distance ourselves. It is our duty as Muslims to stand together. No, a Muslim does not distance himself from one who loves the Prophet Muhammad, peace be upon him, saws sallam (peace and blessings be upon him, ed.). This man has felt pity for the suffering of Muslims in Palestine, he has a heart of gold. Look, there are lots of flowers — it is proof that people are proud of this man, because he sacrificed his life for what he believed in” he said.

From 4 pm. for half an hour the number of participants more than doubled as a group of thirty young hooded and masked men joined them. Around 4:30 pm, with tempers flaring, they raced from the corner of Nørrebrogade and Svanegade to the spot where the 22-year-old Sunday night was killed.

In one clearly orchestrated movement they gathered the flowers and threw them down the street. This was supposedly because it is against Muslim tradition to lay down flowers at a place where a person has died. Instead they stuck a white sign on the wall whereupon one could read “Rest in peace. May Allah be merciful to you” before they went down on their knees in front of the site of the killing.

With their hands up beside their ears they prayed to God before they together stood up and shouted “Allahu akhbar” with their fists thrust into the air. None of the young men wanted to talk to Jyllands-Posten, but the rumour amongst the observers was that one of the young masked men was the 22-year-old’s brother.

Whether this scene will be repeated every Friday in the future, none of those present would talk with Jyllands-Posten about it. But Bilal Gurleyek is cocksure:

“I definitely think that this will be a new gathering place for Muslims in Copenhagen. And so it should be, because it is our duty to pray for another Muslim,” says Bilal Gurleyek.

Even after what he apparently has done?

“Only Allah can pass judgement on that.”

36 thoughts on “Praying for Omar”