Rembrandt Clancy has translated the LEGIDA speech given by Götz Kubitschek in Leipzig on Wednesday, January 21, and includes his introduction and annotations. 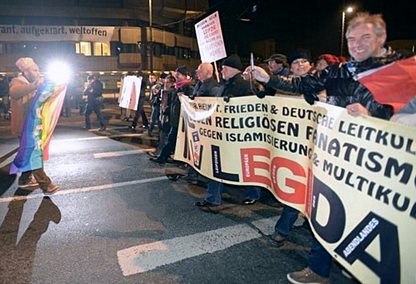 From listening to him in interview by Michael Stürzenberger, Götz Kubitschek appears somewhat on a par with intellectually inclined writers such as Manfred Kleine Hartlage and Roland Woldag.

Now there is a video for the speech, but the video breaks up. Kubitschek’s speech was part of a 3:39:33 hour video which was originally the livestream broadcast by RT. Everything is HD until Kubitschek’s speech when the video becomes highly pixelated and never clears up completely. PI usually embeds these videos, but from what I can see, they only link to that large YouTube version.

Götz Kubitschek was born in Ravensburg in 1970. He read Germanic Studies, Geography and Philosophy at the Gottfried Wilhelm Leibniz University in Hannover and at Heidelberg University, during which time he was editor at Junge Freiheit, a well-known national and weekly newspaper. In 2000 he founded the publishing company Antaios. In addition he has been the chief editor of the journal Sezession since 2003. He lives with his family in the state of Saxony-Anhalt.

In 2012 Götz Kubitschek co-authored a book with Michael Paulwitz called Deutsche Opfer, Fremde Täter, Ausländergewalt in Deutschland (“German Victims, Foreign Perpetrators: Immigrant Violence in Germany”). The following is a short excerpt from a description of the book’s content, which pertains to the themes of re-population and German identity emphasised by Mr. Kubitschek in his LEGIDA speech in Leipzig of 21 January 2015. The complete German language version of the book summary is found at Antaios Publishers:

Integration has failed: In many West German cites there are neighbourhoods with a high proportion of immigrants. German youths are already in the minority there and see themselves exposed to an aggressivity which has long since exploded in intensity and brutality beyond a bearable measure. […] Germans are falling into a minority in their own country; and for their part, they are facing the choice either of adapting, leaving the neighbourhood or continuing to run the gauntlet as “victim”, “S***-German” [Scheiß-Deutscher] and “German slut”.

Violence against Germans is a problem about which almost everyone is aware but about which almost no one speaks. Thus the victims remain unprotected in their own land: Germans as victims have no lobby amongst their own countrymen who work in the media industry and politics.

For many individuals — and hence for Germans in general — it is a struggle for the existence or non-existence of their own identity in their own country.

Speech in Leipzig by Götz Kubitschek

My name is Götz Kubitschek. I am allowed to address you tonight; and before I answer the question why we have taken to the streets today, I wish to emphasise three points:

I will elaborate on one point: That what we are doing tonight is every bit within our rights. It is in our right, which is anchored in the Basic Law, to go onto the street to demonstrate and to put forth demands.

On Monday, this right was denied to Dresdeners. There was a threat to murder Lutz Bachmann from the Islamic side.

I do not know who among you has been present in Dresden — I have been there five times and did not hear a single instance of agitation against Islam.

Moreover, I have read the 19-point paper of the Dresdeners and found not even the slightest vilification of Islam.

But over the last weeks I have also listened very carefully to the politicians:

Hannelore Kraft[1] of the SPD [Social Democratic Party] has said concerning PEGIDA: “Who goes there must understand to what kind of Pied Piper [Rattenfänger]* he is offering a stage.”

*[Rattenfänger: lit., rat-catcher, after the child’s tale, “Rattenfänger von Hameln” (Pied Piper of Hamelin). The usual English rendering is therefore “Pied Piper”, which conveys the idea of a fatal, seductive drawing power of the PEGIDA leadership (though many would agree it is anything but charismatic). But there is a second meaning which is lost in the translation. MortonMorton, in his recent article “ The Semantic Power of the Opinion Makers “ (Politically Incorrect, 22 Jan. 2015) observes that the epithet Rattenfänger, in its signification as “rat catcher”, implies that politicians are referring to their own people as “vermin” (Ungeziefer). The “rat catcher” epithet, highly charged in German, has been in common usage among German elites in their reference to the PEGIDA leadership. Other Machtwörter (power words) are “Mischpoke” and “Nazis in pinstriped suits”.]

Loreny Caffier[2] of the CDU said: What we are dealing with here “is mere agitation and slander.”

And Thomas Oppermann[3] of the SPD expressed himself with the greatest clarity. He said: “We must fight against those who are pulling the strings.”

What does Thomas Oppermann mean by that? Is that not a tip to possible assassins? Such politicians are ideational incendiaries.

The concerned faces of the politicians and their commitments to the right to demonstrate seem cheap and mendacious to me.

Yesterday a friend from my village said to me: “I work with my hands (bin Handwerker, tradesman) — politicians are mouth-workers (Maulwerker).”[4] I promised him I would use this word today.

Angela Merkel, Thomas Oppermann, Wolfgang Thierse [SPD] and other mouth-workers ought to have marched along in the front row on Monday in Dresden — not for the demands of PEGIDA, but for the right of PEGIDA to demonstrate in favour of their demands.

What challenges actually arise from that? Why have we taken to the streets here in Leipzig tonight? I can explain that in one short sentence. This sentence was once cried out in Leipzig twenty-five years ago, loudly and courageously: “Wir sind das Volk!“ [We are the people!]

All of us here are part of the German people; and in the Basic Law it is written, that this people, and no other, exercise power: “All state authority is derived from the people” [Article 20 (2) — “Constitutional Principles — Right of Resistance”].

All politicians, all state officials, all judges, all policemen are from the people and elected for the people or they are appointed by them. They are there for us, not for themselves! They are there to defend and to support the well-being of this people, our well-being.

And this much we must never forget: we have as a people the right to take to the streets with our concerns about our welfare! But no politician has the right to choose another people!

There is no need for our people to be reinvented. A people are not invented anew; a people change organically (sich wandeln [grundlegend], cf. Duden), slowly and carefully. Our people have always taken in foreigners and have welcomed new citizens who have wished to belong to Germany. That was never a problem. But our people must not be replaced.

But in addition to that, there is another reflection important for all of us: Our people have a long and unique history. Our people have learned much from other peoples and have passed much along to other peoples: their inventive genius, their organisational talent; their industriousness is proverbial, their music and their philosophy are peerless. Our people asserted ourselves in the difficult centre of Europe; they have waged war and have been defeated in war.

Why do I catalogue all these things? I catalogue them because all of us here are the ones who must carry this German history forward and it is we who have the prerogative to carry it forward.

That begins in the family: We have mothers and fathers, we have sons and daughters, and we are a part of the history of Germany.

We carry with us the history of the citizens and farmers who have built our cities and villages.

We carry with us the history of the book printers here in Leipzig and the history of every fortunate citizen who heard [Johann Sebastian] Bach playing the organ in the Thomaskirche.

We carry with us the history of the great Battle of Leipzig [Völkerschlacht 1813] in which the entirety of the German people fought for their freedom.

We carry with us the history of rich and poor people, the history of diligent craftsmen and great researchers, of good mothers and of rigorous teachers.

This history issues into that which most of us still carry in our experience: into the history of the divided Germany and of a country torn apart, and into the great battle which the citizens of the GDR waged for us: the fight for freedom and the reunification.

Now we are all continuing to build on German history. That is no easy task, and I must point to something very painful: The politicians who are leading our people in the wrong direction are our countrymen; and the demonstrators who are blocking us and attacking us are likewise our countrymen.

There is a deep rift running through our people, and we can close this rift only if we think of the entire people together with our concerns.

But we can do what is possible. We must ensure that this land remains our land and that our people will build on their future without a rift. That is my wish — and yours, is it not?

Below is some information about the demonstration in Leipzig, with some links to videos. Additional video links can also be found at MOPO24, from which I took most of the following information.

Here is a summary of what MMnews had to say about the expectations prior to the demonstration:

In Dresden PEGIDA had brought 25,000 people onto the street. Because the PEGIDA demonstration scheduled for Monday in Dresden was prohibited, the organisers expected a movement from Dresden toward “LEGIDA” into Leipzig for Wednesday. The two cities are just over 100 km apart. Reinforced from Dresden, the organisers anticipated about 60,000 people. The police planned on one of the largest deployments since unification.

According to MOPO24, only 15,000 LEGIDA demonstrators were on the street. There were altogether 20,000 counter-demonstrators.

All of the following is taken from MOPO24:

PEGIDA in Dresden wishes to revoke the licence of LEGIDA Leipzig. According to a press release: PEGIDA regrets ‘…that the organisers of LEGIDA have issued no clear statement that they accept PEGIDA’s catalogue of demands. Everything which was said and demanded tonight in Leipzig was not agreed with us. That can prove counterproductive for the perception of unity in respect of our movement. Therefore we are looking into an injunction”, said PEGIDA spokesman Kathrin Oertel.’

The Federal Minister, Thomas de Maizière (CDU) refused to talk with the Islam critical PEGIDA alliance: “I have no intention of talking with the PEGIDA organisers”, Maizière said in Berlin on Wednesday.

The Public Order Office of the city of Leipzig had shortened the originally planed march around the entire inner-city ring-road. The organisers filed a complaint with the Administrative Court in Leipzig which sided with the city on security grounds.

At about 18:35 at the main train station, a large crowd of counter-demonstrators formed who intended to block the arriving LEGIDA supporters from getting through. Video here.

Jürgen Elsässer (58), the founder and editor of Compact Magazine, spoke at 19:00. He asked:

“How can it be that every Obama appearance is protected perfectly and our walks are not? My heart beats left today, but with this red-lacquered terrorist from Connewitz I will have nothing to do.”

His speech was disturbed by a laser pointer.

[The “red lacquered terrorist” to which Mr. Elsässer referred is probably Burkhard Jung (SPD: Social Democratic Party), the Lord Mayor of Leipzig (Oberbürgermeister), who lives in Connewitz, a borough of Leipzig.]

Here is another scene from the demonstration. One hears the counter-demonstrators shouting “Nazis raus”, and near the end of it, the LEGIDA demonstrators with “Wir sind das Volk”.

9 thoughts on ““Our People Must Not Be Replaced””