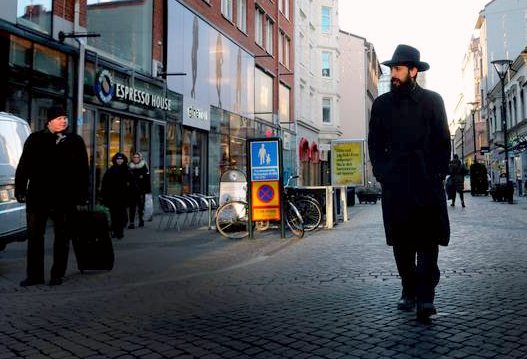 The following video is a brief excerpt from a full-length program that originally appeared on Swedish state television. It’s not what you’d expect: it exposes the Swedish public to the irrefutable existence of no-go zones in Malmö — no-go zones for Jews, at the very least.

Yet the footage is shown in black and white, for some strange reason. Is this retro chic? Or is there another reason?

The fact that the faces of the bully-boy “youths” are pixelated out provides a clue about a possible motivation: concealing the ethnicity of thugs who intimidate Jews in Rosengård. Gray-scale blurry faces could be whites, Middle Easterners, Kosovars, anything but the most highly-melanized enrichers. However, a native Swede can presumably detect the immigrant patois when the young rascals yell their threats and insults. In fact, one of the punks sneers at him in heavily-accented English — and it’s not a Swedish accent.

I don’t know whether SVT intended their audience to conclude that these blurry gangstas were Nordic neo-Nazis. If so, they failed miserably. Not even the most thoroughly indoctrinated Swedish multiculturoid could be fooled by this one.

And I don’t need to tell you that there’s no mention of JIM.

Many thanks to Ted Ekeroth for the translation, and to Vlad Tepes for the subtitling:

Below is a translation of the accompanying article from Expressen (translation by Henrik Ræder Clausen):

Wore a Kippa in Malmö — was attacked in the street

The Swedish reporter Petter Ljunggren, working for the Swedish television series “Uppdrag granskning” (“Mission: Investigation”) put on a Jewish Kippa and a star of David, then went for a walk in the south Swedish town of Malmö. That led to eggs being thrown at him and direct threats to leave the place he was in. In the broadcast on Swedish state television SVT tonight, Jews tell about their fear of living in Malmö.

Malmö has more reported anti-Semitic crimes than any other city in Sweden. Jews suffer verbal abuse, egg-throwing and in some cases attempts at physical abuse. This is how the situation is described by the Jews themselves. Approximately 1,500 Jews live in Malmö, and many are afraid to even leave their homes.

Want to leave the city

Others say that they intend to move away from the city, and hardly anyone wants to see their children grow up here. The SVT reporter Petter Ljunggren put on a kippa and a star of David, then went to visit various places in Malmö to see what would happen. Another reporter with a hidden camera and microphone followed him through the city. In several places, including the popular city square Möllevångstorget — often emphasized as an idyllic spot in the city — the confrontation was immediate.

The broadcast shows how the reporter is verbally assaulted by a man calling him “Jewish garbage”, telling him that he should leave the place. Another man hits his own hand and screams “Jewish Devil!”. Later, when the television team goes to the center of Lindängen and to Rosengård [suburb of Malmö], the attacks become so serious that the team pulls back and considers leaving entirely.

A guy on a small motorbike pulls up, warning the reporter against staying there. In Rosengård, the team is first attacked by a full mob, and as they escape from the place, eggs are thrown at them from an apartment above.

According to the report, anti-Semitism in Sweden no longer comes from neo-Nazi groups. Instead, the hatred of Jews is about the conflict between Israel and Palestine.

Rabbi was spat at

Shneur Kesselman, 37, is a rabbi in Malmö, and one of those who feels at risk:

I had been in Malmö for only a few days before someone spat at my feet. It was a kind of welcome greeting. Later, some have thrown stones at my windows, and tried to drive cars over myself and his wife, he relates in the broadcast.

Other members of the Jewish community tell of similar experiences. Persons driving past the synagogue screaming “Jewish pigs”, and headstones in the Jewish cemetery being knocked down.

This has come to a level where one does not feel safe. One does not want to stay here any longer, says Ammon Tsubarah in the report.

For quite a while the Jewish community in Malmö has been shrinking. The Simon Wiesenthal Center in Los Angeles has previously warned Jews against visiting south Sweden, and Malmö in particular. In the years 2013 and 2014, the police recorded a total of 137 cases of suspected anti-Semitic crimes in Malmö. However, none of these led to charges or conviction in court. However, police investigators quoted in the SVT broadcast say that the police is are the right track in dealing with these matters.

Shocked by the report

Hanna Thomé from the left-wing party Venstre, the municipal chairman for culture and anti-discrimination in Malmö, says to the newspaper Kvällsposten that she was somewhat shocked by watching the production before it was broadcast:

There is a lot more to do here, where the municipality as well as the police have a great responsibility. But I also want to stress that there is a great solidarity in this town. For example, when a young guy was severely beaten up in Möllevångstorget, a full 10,000 persons spontaneously gathered in a demonstration through the city.

For more information, see this article at Breitbart.

10 thoughts on “No-Go Zones for Jews in Malmö”