Qasim Rashid is a Pakistani-born American Muslim writer from the Ahmadiyya community. He is the acclaimed author of The Wrong Kind of Muslim: An Untold Story of Persecution & Perseverance

. He also writes for Time Magazine, Fox News, and the Huffington Post. He is a member of the Muslim Writers Guild of America.

One of Mr. Rashid’s HuffPo pieces is a 2012 review of Geert Wilders’ book Marked for Death

. Mr. Rashid characterizes Mr. Wilders as “uninformed”, and goes on to say:

Wilders promises many things in his book, above all that, “we must speak the truth.” Wilders does not fulfill his promises, however, and his disregard for truth is the most astounding. While one opinion editorial cannot possibly respond to an entire book, I illustrate below some of the more grotesque misrepresentations that Wilders proposes. Still, this article is not censorship; read his effort at your leisure. 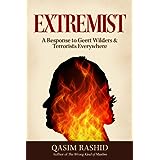 Qasim Rashid has now expanded his arguments against Geert Wilders into an entire book, EXTREMIST: A Response to Geert Wilders & Terrorists Everywhere

. Because he is an Ahmadi, his point of view is not the same as that of the average Muslim (who is either a Sunni or a Shiite). The Ahmadiyya are severely persecuted in Pakistan, Indonesia, and other parts of South Asia.

The blurb for the book on Amazon says this:

Terrorists and anti-Islam extremists are both wrong about Islam. Qasim Rashid proves just that in EXTREMIST: A Response to Geert Wilders & Terrorists Everywhere. Rashid debunks extremists head-on, clarifying important issues like Islam’s view on free speech, women’s rights, and Jihad—among many more. He writes for non-Muslims and Muslims alike, asking you to stand for a narrative of moderation, civility, and compassion—and against the extremist narratives of Geert Wilders and all terrorists. Rashid empowers you with a tool extremists don’t have—knowledge of Islam, and invites you to join the fight for tolerance.

Readers who are interested in a non-mainstream Islamic refutation of Geert Wilders may want to take a look at this book.

19 thoughts on “For Your Summer Reading”