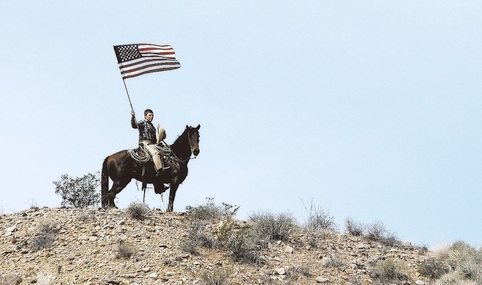 Read by Ammon Bundy at the Clark County Sheriff Precinct, May 2, 2014

As we have had the opportunity to reflect on the events that took place between March 26th and April 12th, 2014-we have experienced feelings of concern, confusion, fear, anger, sadness and joy.

Our peaceful community has been shaken. In many ways, we are still processing the magnitude of what took place. We ask ourselves so many questions; did the federal government really come into this valley and terrorize our community?

Did hundreds of armed forces, in Red Dawn fashion, lock down the hills and valleys of our peaceful home-threatening at gunpoint anyone who stepped off the paved road, with forceful and lethal action?

Did we really see armed forces convoying through the streets of our town, diligently recording names and identities of anyone who glanced wrong or opposed them in any way?

Was there really heavy equipment in the form of dump trucks and backhoes, on our mountains, tearing up infrastructure that we have used for hundreds of years, and is vital to our survival? Were we truly in the cross-hairs of snipers, and under surveillance by the latest in technological weapons?

Did these forces actually point their rifles in the faces of our little children, while beating their unarmed fathers to the dirt and hauling them off in chains?

Did they really body-slam our friend, a 59 year old woman to the ground, and sic German Shepherds on our neighbors — even a pregnant woman?

Did they actually shock a man multiple times with a 50,000 volt Taser for honorably protecting his aunt, while she gathered herself out of the dust?

We reflect in sadness and awe that this could take place in our little town. The terror of armed men occupying our land will never be forgotten. The feelings of despair of these events will long reside in our hearts. Thoughts of anxiousness that this may ever happen again, will awaken us from our pillows from time to time.

During quiet reflection, we may ask ourselves if we did the right thing by resisting. Were we in the right when we acted to safeguard ourselves? When the only response to our multiple pleas for help was silence, when we were left alone to clean our cuts and wounds, did we have a divine right, duty, and obligation to protect our family and ourselves?

We recall the many times we pleaded with our local government to protect us; the numerous times we called 911, and begged our Sheriff to send his deputies to assist. Our cries of distress were met with silence. We ask ourselves, “Did we try hard enough to get our local government and law enforcement to act as a buffer and perform their duty to protect and serve?”

Were the hundreds of phone calls not enough, or is it just that our elected leaders and Sheriff have forsaken the people in trade for power and money? We whole-heartedly want to believe that our Sheriff would not abandon us, but where has his shielding influence been?

Why was he not here to represent and protect the very men, women and children of his county that he swore an oath for? Why did he stand silent and neutral, knowing our community was in terror? What was his motivation of inaction; was it fear of the federal government or political reprisal from powerful politicians?

The scars of this traumatic event will heal over time. We hope our community will eventually return to a sense of normalcy. We fervently hope and pray that these heavy-handed tactics will not be used on us or any other American ever again. We wonder if our hopes will be in vain; will they return?

Will they come back with greater force and more cunning tactics than before? Will our Sheriff keep his oath this time, and use his lawful forces to stop them, or will the people be left to their own protection? Will the good people of this nation yet again have to come running to the rescue of a neighbor?

Will veterans, retired police force, churches, businesses, families and individuals have to unite once again to confront these acts of governmental terror upon the American people?

Will our local government rouse themselves from disaffection and intervene — protecting the people? Will they stop fearing to do the right thing and come to the realization that the people are more important than a government agency? Will they fight for the rights of the state and her people?

They must stop putting personal gain and advancement in front of the rights of citizens.

They need to recognize that, as our elected representatives, they have more power than those governing in brute force, as they have the might of the people of this state backing them. With that power we invest in them, they have the obligation to safeguard our livelihoods, combat forces of fear, and protect our lives with their own.

A few weeks ago, our community was in a state of innocence and naivety. We felt safe and mostly kept to ourselves. We thought the world’s problems would only affect us through television, and could be shut off with the push of a button.

Our innocence has left us now, we have experienced first-hand the breath of force upon our necks. We have gasped in desperation as our lives and agency were threatened. Our cries have been ignored by our guardians in the next room.

We faced a choice — either lie down and submit helplessly in defeat, or bite, scratch, and fight until help would come. We are eternally and profoundly grateful for the many heroic neighbors who heard our desperate cries and crashed through the windows to rescue.

We additionally thank the thousands that came from every State in this great nation, and stood in front of raised guns in our defense, and for the hope that those same guns would never come to their doors and their families. 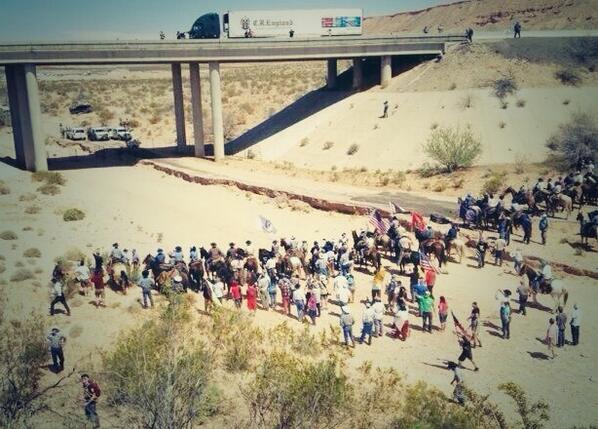 We cannot thank you all enough-you have restored our faith in the goodness of the American people. Our message to all, is that it is time to make things right. It is time to adhere to the supreme law of the land — The Constitution of the United States.

It is time to understand right, stand for what’s right, and do whatever it takes to make it right. We must continue the vision of our Founding Fathers in preserving the freedoms of the American people and the sovereign rights of the States.

A nation can never abandon its fate to an authority it cannot control.

Men must decide if their rights and freedoms are God-granted or are assigned by a federal government. We believe in the rule of laws and sustain a limited government. May God bless us to protect this sacred instrument.

Thank you,
The Bundy Family

Please forward to friends and family.

Previous posts about the standoff at the Bundy ranch:

11 thoughts on ““Our Innocence Has Left Us Now””