It appears that agents of the federal government — BLM, FBI, DHS, and perhaps other letters of the alphabet soup — are swarming into Las Vegas, cramming the hotels and casinos and trying unsuccessfully to look like recreational gamblers. Whatever move they’re planning, they don’t seem overly concerned about operational security, since the patriots encamped to the northeast near Bunkerville are well aware of what’s happening eighty miles down Interstate 15 in the glittering city.

Looking like nothing so much as the evil-eaten Emperor Palpatine from the Star Wars saga, Senate Majority Leader Harry Reid has promised local media that “this isn’t over.” And, in truth, reports on the Internet of Fed cops of various agencies’ jack-booted thug teams flooding into Las Vegas hotels are certainly correct. They are there by the hundreds, taking over entire floors, playing the slot machines and trying to look inconspicuous, which is working out about as well as you might expect. This is known to just about everybody who’s paying attention to the situation in Bunkerville, including the local media who are not reporting it, for now. Just who this demonstration of stark naked so-called “operational security” and impotent puffery is supposed to impress is another matter. Harry Reid, perhaps.

Bob Wright has observed that Harry seems to believe he’s in a “biggest [manly equipment]” contest with Cliven Bundy. Like the juvenile high school hall monitor who can’t get the other kids to stop running, Harry is throwing a hissy fit. Personally, I’m happy for him. Every time Harry opens his mouth, we get another hundred thousand converts to our cause nationwide. Indeed, if the mumbling, bumbling Harry did not exist, we might have to invent him. Of course, your average high school hall monitor doesn’t have the power and might of the militarized federal police establishment at his beck and call. Still, what this is supposed to accomplish, beyond a ratcheting up of the attempted psy-war campaign against the Bundys and the volunteers who guard them, is a mystery to the analysts I talk to.

I know that the Bundys are not going away, and neither are the volunteers. Unless the federal government has decided to kill them all and initiate the next American civil war, this is all just your tax dollars at work in a massive display of gambling prowess. 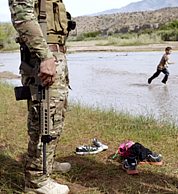 That potential conflict, as I have explained many times, would be suicidal, both personally for Harry Reid and for his mandarin class. And as long as even one closet Oath Keeper or Three Percenter in the federal ranks remains — and there are many — the feds know that there is no military option that cannot be compromised. So Emperor Harry can go on muttering about how “soon the rebellion will be crushed,” and the storm troopers can continue to dip their wicks in the soft envelopments of Vegas hookers, but it is all hat and no cattle, as they say out here. They may be fooling themselves, but they do not fool the hardy band of determined patriots dug in along the banks of the Virgin River.