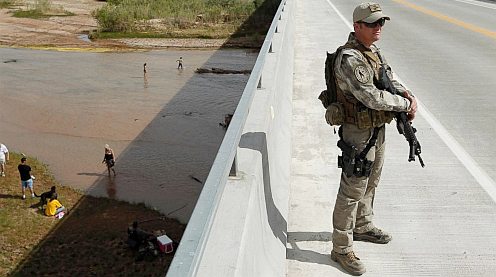 Mike Vanderboegh of Sipsey Street Irregulars attended Easter services at the Bundy ranch yesterday and spent some time with the armed patriots who have volunteered to guard the Bundys.

Below are excerpts from his report:

After the [Easter] service, I hitched a ride up the road to the volunteer base camp, where Jerry, the tactical commander of the Oath Keeper-supported security force led another service for the troops from Chapter Six of Ephesians. Somehow, hearing Paul’s words about pulling on the full armor of God there, in that setting, as I looked from one face to the other of these volunteers — who have come so far and risked so much already and who still risk all in a confrontation of right and wrong with the militarized police forces of the most powerful government on the planet — I shuddered with the power of the image, the emotion of that moment, unchanging since the Founding, immortal in its moral force.

There is a feeling among those who merely pay attention to the news cycle that this is somehow over, that the potential for disaster has been averted. It has not. The men and women dug in on the banks of the Virgin River understand that and are in it for the long haul. It ain’t over until it’s over. The defensive operation, almost despairingly comic in its early days of confusion, is coming together now. Volunteers come in, others leave, but will be back. The logistics, fueled by the generous donations of money and material from all over the country, are coming together, as are the various “shops” of planning, operations, communications and support. The inevitable snitches, most of them painfully obvious, have nothing to report to their masters for no laws are being broken. The paid provocateurs are gradually tipping their hands as well. Jerry, his hardy band of mission-focused veterans, and the Oath Keepers and Three Percenters who form the teeth of the teams in overwatch and the muscle of the logistics tail are doing pretty well, thank you very much, despite all the psy-war games played by the Feds, including a regular but invisible bombardment of all of the various forms of our communications by the Feds. (Notice that we still haven’t been able to get the videos of Saturday’s speeches on YouTube? Your tax dollars at work.)

Today I must fly out of here, having helped, I hope, in my own small way. Left behind will be that determined minority of increasingly confident and competent volunteers. I wish I didn’t have to leave. My instincts cry out to stay. But I have other duties that must be seen to. Yet, I know I will be back. These men and women are where God placed them at this precise moment and place in history, carrying out the function of that “well-regulated militia” that the Founders intended to defend the people in times such as these. They represent the shield, the armor, of a free people. They are also a tripwire. The Feds must go through them — they must kill them — to get to the Bundys. The Feds know this, and they are hesitant about what will happen if they try. That is called strategic uncertainty. And in the present context, that is a very good thing. They need to be cautious.

So I fly out today. But the volunteers are digging in along the Virgin River for the long haul. I have a feeling that they will still be there when I get back, keeping the Bundys safe from the evil intentions of armed bureaucrats. And as the sun rose over the desert on Easter Sunday, it was brought home to me by those twin services that here is a cause worth living for and returning to — it is a cause worth fighting and dying for as well. Jerry and his volunteers of indomitable spirit know this. They have taken the measure of the situation, the weight of their duty, and they have acted.

They are digging in along the Virgin River — a fragile human tripwire arrayed against an out-of-control imperial federal government that ought to know better. They are digging in, and they need your support, in whatever way you can give it.

Previous posts about the standoff at the Bundy ranch:

24 thoughts on “Digging in Along the Virgin River”