A man named Harry Reid represents the state of Nevada in the United States Senate. As Senate Majority Leader, he also holds one of the most powerful political offices in Washington. His former top aide heads the Bureau of Land Management, which mounted an offensive operation against the Bundy ranch earlier this month using armed agents, armored vehicles, and snipers. His son Rory represents the Chinese energy company that plans to build a huge solar panel plant on public land in the Nevada desert, as soon as the last of those annoying cattle ranchers can be evicted from real estate controlled by the federal government. The only thing standing between the Reid dynasty and the realization of its lucrative dream is a single cattle ranch near the town of Bunkerville, plus an undetermined number of dedicated and well-armed patriots who have gathered to guard it for the past several weeks.

The following graphic, borrowed from Sipsey Street Irregulars, highlights the capricious nomenclature employed the federal government when it talks about “terrorism”: 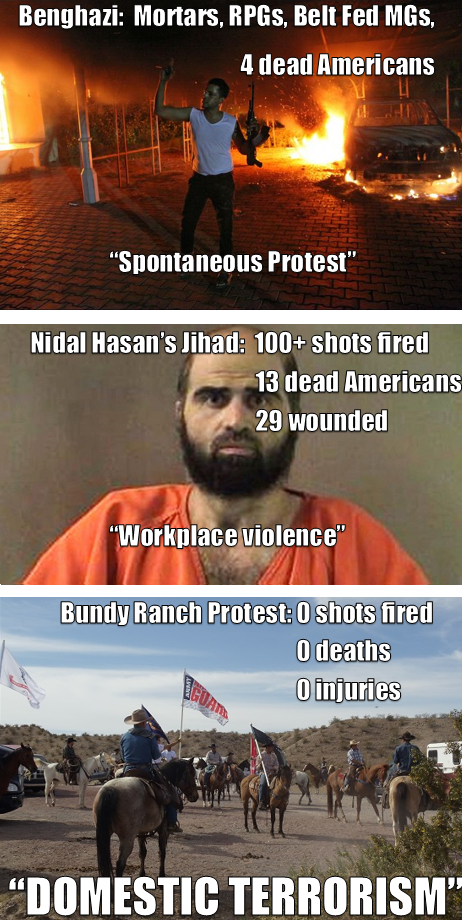 Mr. Reid’s repeated use of the term “domestic terrorism” is deliberate, and has a specific purpose. As a member of the Legislative branch, he is prepping the battlespace for the Executive by describing the events in his state using those words. What we may expect next is that the Executive will also invoke “domestic terrorism” concerning ongoing events in Nevada. When that occurs, it will activate provisions of the Patriot Act that permit the suspension of certain constitutional rights for those citizens so designated.

Which is what those patriots gathered in the Nevada desert this weekend predicted when the Patriot Act was first passed — by a Republican administration, mind you, with overwhelming support from a Republican Congress. Osama Bin Laden and the Great Jihad were incidental to the purpose of the Act, which was to ensure that the federal government could crack down on armed domestic dissent whenever it became necessary.

The liberty-minded people who have gathered near Bunkerville to guard the Bundy ranch do not believe the current stalemate will end well. The federal government is unlikely to slink away from the scene, never to return. Its invincible power must be seen to be irresistible, pour encourager les autres.

Yet this will not be another Waco. Spend a half an hour browsing the patriot websites, beginning with Western Rifle Shooters, and you’ll see what I mean. Not only is the Resistance present in large numbers in Nevada, it is well-armed, well-equipped, and assisted by former members of the military who have experience with the army surplus equipment that is likely to be used against them.

In addition, events as they unfold will be reported, recorded, and live-streamed from the scene. Even shutting down the cell towers and the internet will not suffice to staunch the flow of information about whatever eventually transpires near Bunkerville. This revolution will be televised.

No, this won’t be another Waco.

In the meantime, the patriots gathered yesterday to take refreshment and listen to music on the banks of the Virgin River in Nevada — guarded by armed members of the militia. According to The Las Vegas Review-Journal:

BUNKERVILLE — Wearing a cowboy hat and with a copy of the U.S. Constitution poking from his shirt pocket, controversial rancher Cliven Bundy on Friday asked dozens of supporters of his cattle-grazing feud with federal land managers what they thought of U.S. Sen. Harry Reid calling them “domestic terrorists.”

“Are you guys domestic terrorists?” he asked the crowd gathered around a stage near the north bank of the Virgin River.

The supporters, many wearing name tags that said “domestic terrorist,” erupted with cheers and applause.

“That’s what I thought. I thought Harry was right,” said the 67-year-old Bundy, who was accompanied by armed escorts.

He made the statement before a “Patriot Party” that started at 5 p.m. with music by Madison Rising and Ron Keel, who sang with Black Sabbath briefly in 1984. A party atmosphere among a few hundred people grew as more supporters trickled in around 5 p.m. Some people were cooling off in the river while dozens of armed militia members wearing camouflaged fatigues patrolled in and around the area.

At Friday’s news conference, Bundy said, “We’re not asking the county sheriff to disarm the citizens of the United States. We’re asking the United States to take the government-issued guns away from these people, and when they have uniforms on they shouldn’t be packing a gun.”

Asked what he’d do if he was served with a warrant for violating federal laws, Bundy answered, “What I said is, I’d yield to the sheriff but I wouldn’t yield to the feds.”

If the sheriff served the warrant he said he’d surrender. “Well, I’d have to.”

He said he has a right to graze his cattle on public land, not just a privilege.

“They’re rights. And I own those rights,” he said.

When a few of the supporters were asked what they thought of Reid calling them “domestic terrorists,” they welcomed the label.

“Him and his organization are the terrorists of this country,” John Vasilchin, 85, of Las Vegas, said about Reid.

“They’ve been destroying this country for the last eight years and previously back to (President Bill) Clinton,” Vasilchin said.

Mike Vanderboegh [of Sipsey Street Irregulars] said he will unveil the “2014 incitement to civil war trophy” to Reid on Saturday at the protest area.

Another event is scheduled for later today. Check out the original article for photos of relaxing partygoers surrounded by guards wearing camouflage and carrying semi-automatic weapons.

Needless to say, a large amount of disinformation about the Bundy ranch has been flowing through the congested channels of the Internet. III Percent Patriots reminds people not to believe everything they read without checking it out through reliable sources:

**CAUTION** The net is beginning to populate with “first-hand accounts” from people claiming to have been on-site. Some of those reports simply do not sound reasonable to my ear. Just be careful before swallowing every report you see as gospel.

Also: There are several groups who “support” the Bundy’s that have been putting out hyperbole and in one case a call-to-action that was issued without the Bundy’s approval. If you see a call-to-action, cross check the veracity at either the Bundy BlogSpot or official FB page below.

Bad information will spend resources that are limited, create bad PR, and may get someone hurt. We are now in a different era of American life. Stupid may get people hurt, or dead. Don’t be that guy.

Cliven Bundy was carrying a copy of the Constitution yesterday. The patriots gathered in Nevada concur with him, asserting their God-given rights as affirmed by the First and Second Amendments to the United States Constitution.

However, the unfolding events may be more accurately referred back to July 4, 1776, when the newly independent colonies issued the Declaration of Independence:

We hold these truths to be self-evident, that all men are created equal, that they are endowed by their Creator with certain unalienable Rights, that among these are Life, Liberty and the pursuit of Happiness.

That to secure these rights, Governments are instituted among Men, deriving their just powers from the consent of the governed,

That whenever any Form of Government becomes destructive of these ends, it is the Right of the People to alter or to abolish it, and to institute new Government, laying its foundation on such principles and organizing its powers in such form, as to them shall seem most likely to effect their Safety and Happiness.

Prudence, indeed, will dictate that Governments long established should not be changed for light and transient causes; and accordingly all experience hath shewn, that mankind are more disposed to suffer, while evils are sufferable, than to right themselves by abolishing the forms to which they are accustomed.

But when a long train of abuses and usurpations, pursuing invariably the same Object evinces a design to reduce them under absolute Despotism, it is their right, it is their duty, to throw off such Government, and to provide new Guards for their future security.

The federal government has been usurped by power-hungry opportunists who disregard the Constitution they are sworn to uphold. Our government has become tyrannical and despotic. It is our right, it is our duty, to throw it off and replace it with one that guarantees our God-given liberties.