MC’s latest essay takes a look at the cultural destruction wrought by the Left as it implements its utopian socialist ideals. 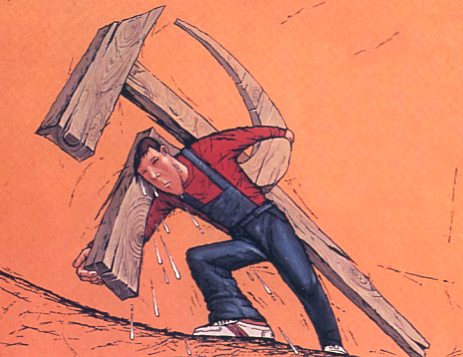 The Emotions of Socialism
by MC

My cousin once told me that ‘socialism’ has to be right, or else life is not worth living. This has the irrationality of a religion, and it is this emotional view of politics that the socialist elite cynically exploits. But it is really all about the Garden of Eden, and whether mankind was corrupted or not. Is mankind intrinsically good, or thoroughly bad? Socialism appears to seek to rebuild Eden, at least for its elites, but to do this it must make its drones feel elitist and intrinsically ‘good’.

So whilst the elite enjoy their Eden, they must keep close watch on the gatehouse. They must at all costs keep the aspiration to the Edenic utopia going, but deny access to all but their own clique. So the foot soldiers of socialism labour for a utopia to which they are denied access by their own leaders.

This is the hoax at the heart of the problem.

There are prime weapons to keep the drones droning. For the middle-class college-educated there is the emotional appeal of striving for a better world. For the working classes there is the cradle-to-grave assurance of socialised medicine, unemployment benefits and pensions. And for those who don’t want to work, there are the welfare payouts.

But the cost is enormous, and this is where the careful propaganda comes in. Socialism within a democracy needs the worker to pay for the shirker. The real currency is not the dollar or the euro; it is the vote, and votes are won by targeted propaganda.

The middle class must have their egos stroked. They must be convinced that they are ‘good’ and ‘kind’, and that their ‘superior’ intellect puts them above the masses. The working class must be constantly kept in a state of fear, fear that they will lose everything. The scroungers need to have ever more desirable carrots dangled in front of them.

In the last twenty or so years, the elites have created a new group, the ‘itinerants’: foreign immigrants who are attracted by higher wages or welfare payments to settle the country but to also proselytize culture, to muscle out their own cultural lebensraum at the expense of the local indigenous culture.

The socialist elite always intended this to happen, it is a pre-planned part of the process. The whole concept of multiculturalism was pre-designed to accommodate this wave of hostile immigration.

What we need to understand is: Why?

Let us look at a similar occurrence in history; the fall of Rome and particularly its aftermath. The post-Roman scenario is of feudalism on a vast scale, with a now religious Rome rather than a military Rome at the centre. A feudal system comprises three distinct hierarchical classes with no mobility among those classes. The aristocracy are the landowners who use slave labour to produce food. The guildsmen, mainly in towns and cities, manufacture goods for the benefit of the aristocratic classes. The serfs are the slave classes owned by the aristocrats.

A fourth class was the religious hierarchy. Its role was to skim off those of academic ability; the potential opposition amongst the slave classes, and absorb them into the church and thus render them politically impotent through indoctrination.

When we look at this we can understand the direction in which this iteration of the socialist elite is moving.

There are only two things in their way: the First and Second Amendments. This cannot work if the serfs can shout back and shoot back!

The key to feudalism is the destruction of the middle class. It must be eradicated not neutralized, and that is where Islam plays a role. In Islam there is no place for an educated middle class; there is just indoctrination; especially of males.

In Eden the woman was deceived by the serpent, but the man made his own decision to disobey God. Later, the woman confesses to being deceived; the man blames the woman and God. As Jews (whose scripture this is) know, one who is deceived may be forgiven under Torah, but one who knowingly defies God is not forgiven under Torah (hence the need for Messiah; see Numbers 15:17).

Women are much more pragmatic than males, they tend to be more in control of the emotions that matter, and thus women are the anchor upon which the middle classes depend. Islam attacks women and belittles their ability to anchor males to emotional stability. Likewise feminism destroys womanhood by masculinising females (and by feminising the males). It is the processes of motherhood which are under attack here.

There was a time when society, and therefore mothers, understood the need for boys to express their masculinity. This has been a prime target for socialism since the sixties.

In 1966 the Advanced Party report completely changed the focus of the UK’s Boy Scouts movement. The focus moved from individual development to collective development. Instead of acquiring personal skills, one had to acquire community skills. Subsequently girls were allowed to join the movement. This quite naturally proved a huge distraction, and introduced complications requiring female oversight. Somehow, the introduction of girls led to a loss of spontaneity. All events had to pre-planned so as not to compromise the needs of the girls; girls cannot just use a convenient bush, and neither can boys when girls are present.

So the boys lost their opportunities to be boys and had to accommodate female needs. One might note that the same was not done to the Girl Guides.

Nobbling the masculinity of males is a prerequisite for a feudal society. A true male is prepared to defend his family and his property, but society, helped by cultural Marxist propaganda. has reduced Dad to a bumbling idiot (if he even exists in the lives of many boys and girls).

The middle class is built upon a balanced and shared responsibility to provide a house, a family and a piece of land (an income). This has proved to be an easy target in a secular humanist society. Take away the Judeo-Christianity and the family house begins to crumble, and with it the middle class.

Such is the reality of the elite socialist attack on Western society. Why cannot society see the dire results of this pernicious attack?

Social elitism is very clever at keeping the class separators in place, and in building up class tensions in such a way that the different target groups are alienated and can be treated differently. Because there is little cross-fertilization between class groupings, few get to see the real picture, and those few that do can be isolated.

Stroking the ego of the self-proclaimed intellectual is part of this process. One must provide propaganda in the form of emotionally attractive stimulation of what intellect there is. The candidate must be carefully fed the salient features of his own destruction. These must appeal to his intellect, his vanity or his sexuality. Once hooked, it is rare for one of these intellectual dupes to break away.

Emotional socialists need to believe that they are ‘good’ people. They too can be specifically addressed by the socialist elite. Like Stalin’s ‘show’ communities, these gullible people can be shown the righteousness of their beliefs, they can be shown the British NHS (planned by conservatives, implemented by socialists), the welfare state where nobody starves, free schooling where nobody is educated. And they feel good and vote like cattle.

So bid an emotional farewell to a middle class existence; it is leaving from a platform near you. O middle-class Christian, you have been condemned and your life is forfeit! Go to your designated cattle car for your resettlement journey and for the “special treatment” that awaits you, a place where your religious freedom will be respected , but where you cannot pollute our socially just society with your antiquated ideas of right and wrong.

24 thoughts on “The Emotions of Socialism”