Note from the author: The people who appear in these photos are tourists who just happened be present when the photos were taken.

The Walls of Jericho
by Fjordman

Israel’s two largest cities, Tel Aviv and Jerusalem, are very different in both setting and atmosphere. They are almost like two separate countries, even though Israel as a whole is quite small. As a matter of fact, Israel is so tiny that it must be hard for the Israeli Air Force to get proper practice.

I like Tel Aviv. It has a relaxed, secular atmosphere and a beautiful beachfront. It is actually a suitable party city, for those who like that sort of thing. Jerusalem is very different. First of all, the locals are much more religious. That goes for the Jews as well as for the Muslims and the Christians.

Tel Aviv is attractive in many ways. From a slightly different point of few, it’s just another Mediterranean city, only with more kosher restaurants. In contrast, Jerusalem is truly unique. Due to the special status and religious significance of the city, it has a different appearance, too. The buildings are usually covered in a distinct white stone. Finally, Jerusalem is situated inland at an elevation of nearly 800 meters. This makes it colder in the winter than Tel Aviv or Haifa. Jerusalem is not a ski resort, but it sometimes has a couple of days with snowfall during the winter.

It was a cold winter morning in February 2013 when I took a day-trip from Jerusalem to Jericho. I had seen most of the major sights in the region before, often several times. One of the exceptions was Jericho, however, so I decided to pay the city a visit. 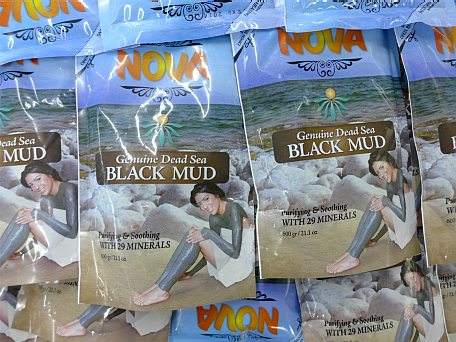 A shop in Jericho sells various souvenirs, many of them associated with the nearby Dead Sea.

For those so inclined, a trip to Jericho can easily be combined with a swim in the Dead Sea. I’ve done this before, it’s somewhat of a tourist trap. Everything you read about it is true: you can read a newspaper without sinking and even fall asleep in the water. Which is fun for about five minutes; after that it gets boring. Women can also buy Dead Sea mud, which is reputedly good for the skin. I can’t verify whether or not this is true.

Jericho is located 258 meters below sea level, near the northern end of the Dead Sea (but not directly on the shore of the Dead Sea). It bills itself as the lowest-lying city in the world. If you make the trip from Jerusalem, you have to descend more than 1,000 meters. On the way there, it is customary for tourists to make a stop at the sign marking sea level. 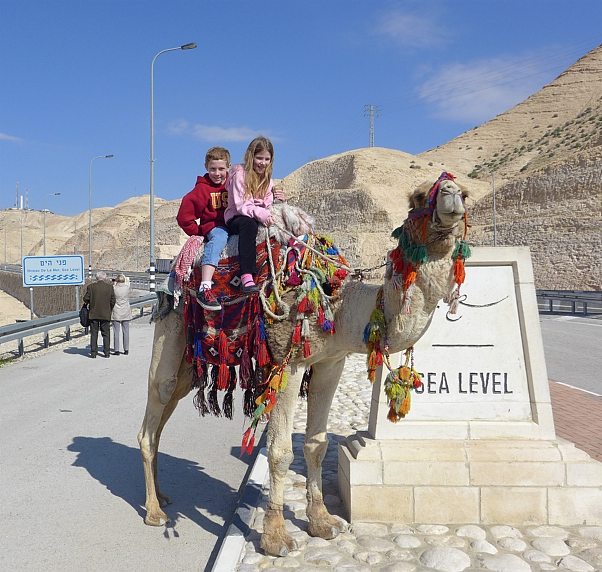 This photo was taken on the road from Jerusalem down to the Dead Sea and Jericho. It is common for tourist buses to make a short stop at the sign indicating sea level.

On this particular day, the desert was slightly green. This is something I’ve seen before: on rare occasions when a little bit of rain has fallen, the desert turns green for a short while.

Jericho was warm and sunny, and certainly a lot warmer than Jerusalem was in February. This climate makes it an excellent place for agriculture, which is one of the reasons why it has been inhabited for so long.

The oldest archaeological traces of permanent settlements at Tell es-Sultan in Jericho date back to at least the ninth millennium BC. That is about nine thousand years before anybody had ever heard of Islam or its founder Mohammed. It is because of these extremely old ruins that tourists like me visit the city today; it is not in order to see some more Arab Muslims. If so, we might just as well visit the Gaza strip.

Christian tourists might like to make the visit to see the nearby Mount of Temptation. This could be where Jesus, according to the Christian Bible (Matthew 4:8), was taken to a mountain top and tempted by the devil. Yet even this site dates back to the pre-Islamic era.

The monastery at the presumed Mount of Temptation, which overlooks Jericho.

There are a few other Christian sites in the city such as a Greek Orthodox church at the presumed site of Zacchaeus’ sycamore-fig tree. Yet the major draw of most visitors is the archaeological site of Tell es-Sultan. Here one can look down at traces of a succession of settlements in the same spot, stretching back more than ten thousand years, within a city that still exists today. There are few, if any, other places on Earth where the same span of habitation can be seen. At the time of Joshua and the Battle of Jericho, as described in the Hebrew Bible, the city was already extremely ancient. 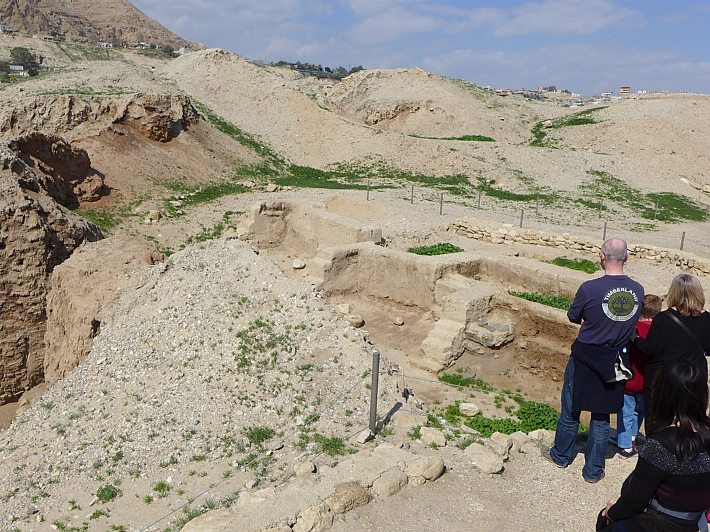 Tell es-Sultan is the main archaeological site in Jericho. The earliest documented settlements here go back to at least 8500 BC, well over ten thousand years ago.

I found some locally produced dates. However, figs and dates are grown all over the Middle East. What surprised me somewhat more was my encounter with locally produced bananas. Bananas are grown in hot places, usually in tropical regions. Yet, as stated before, Jericho is a very warm and sunny location. If a steady supply of water is available as well, bananas can be grown there.

I bought some from one of the local fruit sellers, who was almost certainly a Muslim. They were quite acceptable. On the other hand, I’ve tasted excellent bananas produced in Thailand by local Thai Buddhists. Nobody called them Buddhist bananas because of that. 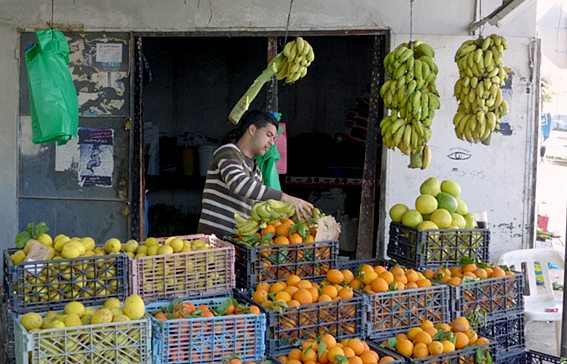 A vendor selling locally produced fruits and bananas in Jericho.

This realization made me thoughtful while my bus was returning to Jerusalem. I liked visiting Jericho. Maybe I will go back some day and take the cable car to the Monastery of the Temptation. I wasn’t able to do so this time. However, it struck me that none of the reasons I had for visiting the city had anything to do with Islam. I was there to visit the ancient sites. I went there in spite of Islam, not because of Islam, even though Islam is the dominant faith in the city today. I realized that the same was true for many other places in the region as well.

The only truly world-class attraction that is unique to neighboring Jordan is the rock city of Petra. You can also go swimming in the Dead Sea in Jordan, of course, but that is shared with Israel. In Aqaba, Jordan’s only harbor town, you can go diving in the Red Sea. Yet you can also do that in Eilat, Israel, or in the Sinai peninsula in Egypt. Aqaba is adequate, but not terribly interesting.

Petra is the only must-see attraction in the country. I’ve been there several times before, but did not visit Jordan this time around. It is theoretically possible to go on a day-trip from Israel to Petra and back, but I recommend spending one or several nights in Jordan if you do go there.

Another fine place to visit in southern Jordan is the scenic desert valley known as Wadi Rum. It is actually quite pretty. The 1962 film classic Lawrence of Arabia was partially filmed there.

I haven’t seen the Roman ruins at Jerash, north of the capital Amman, but I’ve been told that they are worth a visit. I had been briefly to Amman previously and found it much less interesting than Cairo. This comparison may be unfair, since I’ve lived in Cairo and know the city fairly well, but I’m not very familiar with Amman. It’s also true that there are more people living in the city of Cairo alone than in the whole of Jordan.

Nevertheless, even in Cairo, the first things that foreign visitors want to see are usually the Pharaonic sites. Topping that list would obviously be the pyramids and the Great Sphinx at Giza, and perhaps also some of the other pyramids at Saqqara or (in rarer cases) Dahshur.

Next in order of preference, a visit to the Egyptian Museum is usually mandatory. There you can see many fine objects from ancient Egypt, including the world-famous Gold Mask of the boy Pharaoh Tutankhamun. It’s true that the mummy of Tutankhamun was found in 1922 by an English archaeologist, Howard Carter. And it was the French linguist Jean-François Champollion — not an Arab, Turk or any other Muslim — who managed to decipher the hieroglyphs of ancient Egypt.

Which brings us to observe the following pattern: In Jordan, Petra was built by the Nabataeans and flourished in Greco-Roman times. The ruins at Jerash date back to the Roman Empire or earlier. The Dead Sea, the Red Sea and the desert valleys at Wadi Rum are all wonders of nature. They have been there for thousands of years and were not made by man.

This essentially means that none of the major tourist attractions in Jordan have anything to do with Islam. Obviously, there are some large and imposing Egyptian buildings from the Islamic era. However, the typical foreign visitor to Egypt will want to see things from the time of the ancient Pharaohs, visit the Valley of the Kings near Luxor, go in a Nile cruise and go scuba diving in the Red Sea. Again, the major reasons why outsiders visit Egypt are not because of Islam.

The same was true when I traveled in Indonesia in 1996. The fondest memories I have of what is now the Muslim-dominated island of Java are from Borobudur, a Buddhist site, followed by Prambanan, a Hindu temple. I also enjoyed some batik art and a performance of shadow puppets based on the epic Ramayana. However, these cultural products date back to before the coming of Islam.

Finally, I fell in love with the beautiful scenery of Indonesia’s many wonderful islands, from Bali to Flores, Lombok and Komodo. Yet these are all wonders of nature. It is not proper to credit Islam with them, any more than it is right to credit Christianity with the fjords of Norway, the mountains of Switzerland or the Niagara Falls in North America.

In at least nine out of ten cases, the major sites foreigners now come to see in Muslim countries and regions have nothing to do with Islam. Yes, there are exceptions. In certain cases, people may want to see a particularly large and spectacular mosque with some nice ceramic tiles, calligraphy and a pretty carpet. However, in most cases, when outsiders visit Islamic lands today it is in spite of Islam, not because of Islam. Islamic culture in itself brought little of interest. Even modern Dubai is merely a glorified and glitzy shopping center.

13 thoughts on “The Walls of Jericho”