Moazzam Begg is a culturally enriched “British” man who spent a few years in detention at Guantanamo Bay after being picked up by the authorities in Pakistan. When Mr. Begg was released he eventually returned to Britain. He was arrested in Birmingham last Tuesday on suspicion of committing terrorism offenses related to the jihad in Syria.

Between his release from Guantanamo and his arrest in Britain, Mr. Begg was celebrated as an innocent victim by human rights groups, despite his unrepentant jihadist ideology. Our British correspondent JP sends the following report on the case of Moazzam Begg. 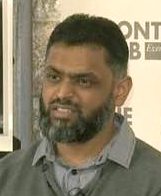 The news yesterday that Moazzam Begg was arrested along with three others in the West Midlands on alleged Syria-related terrorism offences would have been welcomed by many who remember the difficulties experienced by Amnesty International (AI) when its support for the jihadist led to the suspension of Gita Sahgal, head of its gender unit, for voicing criticisms in public in 2010. She later resigned.

When Peter Benenson founded AI the remit was to defend people imprisoned for non-violent expression of their views. To its credit the organisation held to this brief, and when Nelson Mandela advocated violence, he was not assigned ‘Prisoner of Conscience’ status and dropped by the organisation in 1964.

However, this policy did not prevail, and post-9/11 AI adopted an increasingly Sharia-compliant position culminating with the elevation of Begg as a poster boy for defensive jihad. Well-grounded fears that the differentiation between defensive and offensive jihad was as meaningless when applied to Begg and his associates as it is in general were dismissed. The jihadist was too useful a stick for AI and the Left in general with which to beat an embattled West lacking either belief in its own civilisation or the resolve to defend it.

Moazzam Begg and his organisation Cage Prisoners have received support in the past from the following organisations and campaign groups:

A roll call of infamy.

These Sharia-corrupted organisations should collectively be seen as one of the many weapons Islam deploys against the West in its centuries-long war with the kuffar and infidel. A recent study of Wellington has shown that the British were slow to understand the nature of the threat from Napoleon’s France, but eventually the necessary steps, including improved military logistics as well as banking procedures to secure war loans, were taken to ensure victory. The question remains whether those who govern us will recognise the present threat before it is too late: not only from Islam, but also its many enablers lodged in our societies who pursue an agenda at odds with preserving our way of life.

Shunning and shaming the enemy within through robust official censure is a step long overdue, but one that has to be made at some point if Islam is to be repulsed. Otherwise Western civilisation will be reduced to the status of wraith haunting what follows in the centuries to come, until this too is memory.