At 8:16am CT this morning, a large explosion shook a three-story building in Minneapolis. The structure was quickly engulfed by fire, and some of the apartment-dwellers on the upper floors were forced to jump from their windows into subzero temperatures to escape the blaze. The top floors of the building eventually collapsed into the first floor. Fourteen people were hospitalized, and six of them are listed in critical condition. 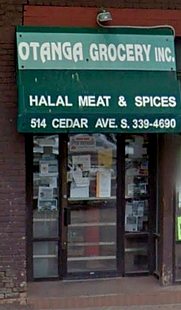 The explosion occurred at 514 Cedar Avenue South in Minneapolis, in the Cedar-Riverside neighborhood at the western edge of the campus of the University of Minnesota, just across the river from the main campus and adjacent to the Bohemian flats area. A news article refers to the locale as an “ethnic community of predominantly Somali immigrants”. I’m told that the neighborhood is also known to law enforcement and intelligence officials as a place where Islamic terrorists congregate.

In one news story the building was described as a “community center” containing a grocery, a mosque, and apartments. Other reports said the mosque was “nearby”. The store on the corner is (or was) the “Otanga Grocery — Halal Meat & Spices”. 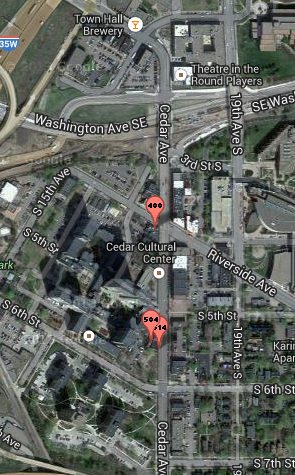 The proximity of a mosque to the incendiary event made my spider-sense tingle, so I took a quick look around the region, using Islamic Finder to check out the mosques and Islamic businesses in or near the 55454 zip code. There were a number of mosques and community centers, a variety of of businesses — including the Otanga Grocery, a.k.a. the “Cedar Halal Market” — several Islamic societies, a collection of doctors, and a construction firm.

A block or so north of the grocery is the “Masjid Shaafici” at 400 Cedar Avenue South. But the mosque described in the news story seemed almost certain to be the “Islamic Civic Society of America and Dar Al-Hijrah Mosque” at 504 Cedar Avenue South, the building immediately to the north of the one where the explosion occurred. For some reason Google Maps puts the mosque behind the building at #514, but it is actually next door. 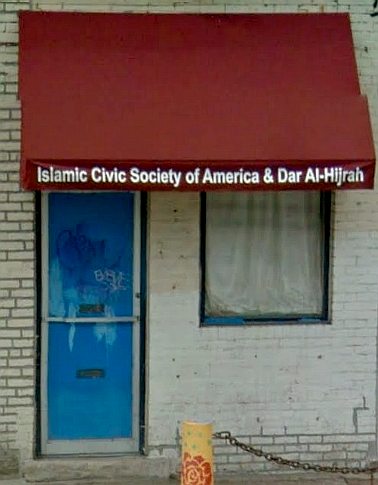 A mosque that is next door to the gutted building appeared to escape any obvious structural damage. Abdisalam Adam, the imam at Islamic Civic Society of America & Masjid Dar Al-Hijrah, watched the firefighting efforts and said he was praying for those affected by the fire.

Out of bloggerly curiosity, I took a look at the website of the Dar Al-Hijrah Mosque. Among the resources on their links page are Prof. Tariq Ramadan, Dr. Yusuf Al-Qardawi, Ottawa Muslim, the Islamic Circle of North America (ICNA), the Islamic Society of North America (ISNA), the Muslim American Society (MAS), The Muslim Brotherhood, the Islah Movement in Somalia, the Muslim Association of Britain, the Council on American-Islamic Relations (CAIR), and other Muslim Brotherhood fronts.

Some of the news reports published this morning said that all the building’s occupants had been accounted for, and no deaths had been reported. However, according to a more recent article, three people are still missing.

Minneapolis Fire Chief John Fruetel told the press that the cause of the explosion is still unknown, and is under investigation. As far as I could determine, no news story or fire department statement mentioned the possibility of a gas leak.

It may be quite a while before we find out the cause of the fire, if indeed we ever do. Therefore the rest of this post is pure speculation.

A big explosion occurs next door to a mosque that has an unabashed affection for the Muslim Brotherhood, in a Somali neighborhood where terrorists are known to hang out — what could possibly be amiss with that?

Nothing, except possibly an Islamophobic hate crime, according to CAIR:

Zuhur Ahmed, a board member of the Minnesota chapter of the Council on American-Islamic Relations, said the group was monitoring the situation closely.

“So far we don’t have any details,” she said. “But whenever there’s an explosion, fire or anything of that sort by a mosque, there’s a little bit of concern if the motive is a hate crime. We’re just concerned and watching out for that.”

But then, CAIR always believes that the best defense is a good offense.

If it were a gas explosion, the normal process would be for gas to accumulate inside the building until a chance ignition detonated it. Under those circumstances, the walls of the building would be blown outwards, causing a sudden, catastrophic collapse of the structure and filling the street and surrounding lots with bricks and rubble.

Nothing of the sort occurred. The earliest photos show an intense and rapidly-spreading fire that looks like it originated on the second floor, immediately above the grocery. This would be consistent with the unexpected detonation of an explosive substance — say, ammonium nitrate, just to pick a random example — which then distributed very flammable material within an enclosed space, creating a flash-fire.

Were the three missing occupants would-be mujahideen who experienced a premature… ahem… detonation?

If this was the case, did they escape out the back before the firemen and the police arrived? Or are their charred corpses buried somewhere in the rubble — shahids before their time?

If the FBI, ATF, or DHS turn up at the scene, we’ll know something’s going on. But we may never hear any details.

39 thoughts on “A Fiery Dawn in Minneapolis”