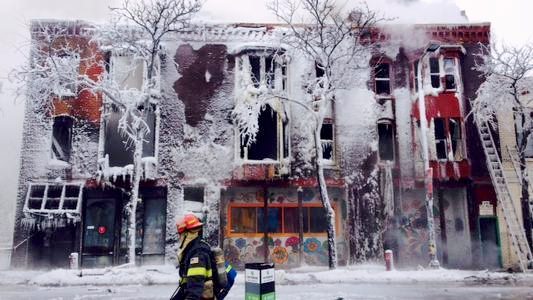 Thanks to an anonymous commenter for pointing out that the Strib article has been updated again.

According to the latest news on the explosion and fire in Minneapolis — now attributed to a — “gas leak”, one body has been recovered from the rubble at 516 Cedar Avenue South:

A body was recovered Thursday afternoon from the wreckage of the three-story Minneapolis apartment building destroyed by a New Year’s Day explosion, fire officials confirmed.

“At approximately 1:55 p.m. Minneapolis Fire Department officials confirmed that one body was discovered in the structure at 516 Cedar Ave. S.,” said a statement by Assistant Fire Chief Chérie A. Penn.

Penn said the victim has been turned over to the Hennepin County medical examiner’s office. She said crews will continue to remove debris until dark and will resume their work Friday morning.

Notice that it wasn’t until after DHS arrived on the scene that the fire chief started to talk about a gas leak:

The cause of the fire is still under investigation. At a news conference Thursday afternoon, the Minneapolis fire chief said the fire in the Cedar-Riverside neighborhood was most likely caused by a natural gas leak.

Fruetel added that the fire began either on the second floor or third floor.

But Fruetel also said that investigators are not certain what caused the fire and they may never be certain. He said four or five investigators have been on the site around the clock, looking for evidence such as debris patterns.

So the authorities are pushing the natural gas leak story, all the while covering their posteriors by saying “we may never know”. But the gas utility, CenterPoint Energy, is not sticking to the script. They seem unwilling to take the fall for what happened on Cedar Avenue yesterday.

Interestingly enough, the spokeswoman for CenterPoint both contradicted the fire chief, and agreed with me about what a natural gas explosion would look like:

A spokeswoman for the natural gas utility CenterPoint Energy strongly discounted natural gas as a likely cause.

“We had no natural gas in the area,” said Rebecca Virden, basing her information on CenterPoint’s own investigation and testing in the area.

If it were attributed to natural gas, Virden added, “the roof would come off, the walls would come out.”

She offered that if there was a gas involved, “it could be a different type of gas.”

Asked about CenterPoint’s denial, Fruetel said, “I’m just basing it on what my investigators say.”

He said officials haven’t determined it was natural gas, but said that is what they’re focused on.

Or, more accurately, that is what Homeland Security is focused on.

The chief called the scene an active investigation that has early on ruled out any signs of an explosive device. Homeland Security personnel were on the scene in the aftermath of the fire that sent 14 people to hospitals, six in critical condition.

But how does he know? The investigation has barely begun. The crews are only now starting to sift the rubble. An arson investigation takes more than a few hours.

And there most assuredly was an explosion at the site yesterday. How can he tell us with a straight face that they are ruling out an explosive device?

This whole business is fishy.

From the Beltway sniper to the Boston Marathon bombing, the federal government always plays down any possibility of terroristic behavior, especially when culture-enrichers are in the vicinity. If the incident can’t be written off as an accident, then the media are sent haring after some tobacco-chewing gun-toting white supremacists as the most likely culprits.

And if, despite their best efforts, Islam pokes its head into the scene, they trot out the tired old mantra: “There is no known connection with terrorism.”

DHS is desperate that this be written off as an act of God. Or Allah. Or, with luck, the gas company.

And the fire chief seems to be reading from their script.

As for the possibility that the explosion was caused by propane — I’ll buy that. Remember the would-be Times Square bomber, with his propane tanks and his fertilizer…