This is the final part of a four-part series. Part II had to be subdivided into A and B. Previously: Part I, Part IIA, and Part IIB. 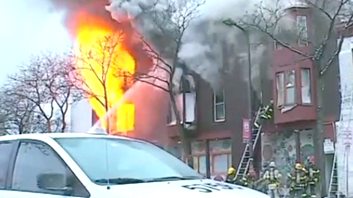 In addition to the commenters directly referred to below I would like to take this opportunity to thank all of you GoVers who have contributed to this analysis through your comments, and particularly your links as posted on Parts I, IIA & IIB. ‘Distributed network’, indeed!

Also my thanks to those necessarily nameless old colleagues who in the background have shared with me some of their long-gone experiences and have mercilessly critiqued some of my more outré suggestions. And, finally, also in the background, the Baron for his time spent examining and commenting on some of the photographs I was using and for pointing me in certain directions which, whilst not all were fruitful, were useful in a process of elimination and in opening up other lines of enquiry.

Errata: In Part IIB I suggested that one particular piece of debris originated here… 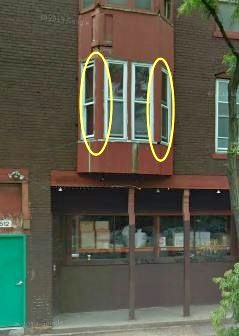 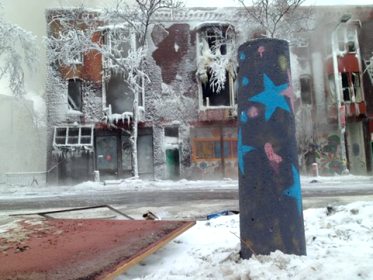 … and its origin further reinforces the obvious conclusion that the explosion occurred in the right-hand room of the apartment immediately above the grocery at No. 514… 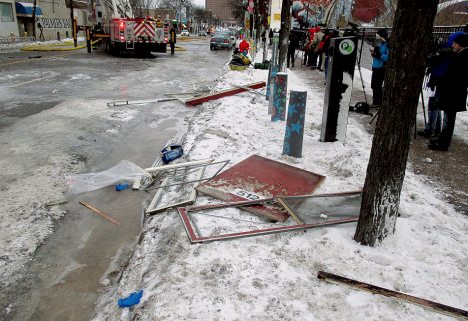 …whilst the post-explosion position of that piece of debris, deposited across the road way beyond the panel blown from over the entrance to the stairway and thus at a significant angle from a line drawn directly in front its point of origin might further indicate that the epicentre was located either centrally or to the left hand side of the room in focus.

In conventional high explosives such as TNT, each molecule contains both a fuel component and an oxidising component. When the explosive detonates, the fuel part is oxidised and as this combustion reaction spreads it releases large amounts of heat. The explosion of TATP (detonation velocity 5200 m/s) involves entropy burst, which is the result of formation of one ozone and three acetone molecules from every molecule of TATP in the solid state. Just a few grams of the material produce tens of litres of gas in a fraction of a second:

Some of its [TATP] blast effects can be seen below: