We reported yesterday about Yahya Hassan, the 18-year-old poet in Denmark who has “an immigrant background”. Mr. Hassan has severely criticized members of his own ethnic and religious group, and as a result has been assaulted, received death threats, and is forced to give his poetry readings under police protection.

Below is an article about Yahya Hassan that was published on November 21 in the Swiss newspaper Tages Anzeiger. Many thanks to JLH for the translation.

Note: The obscene word used in this article — which I have elided with asterisks — appears in its full English spelling in the original, including the article’s URL:

In his poems, the teenager Yahya Hassan attacks the moral double standard of Muslim men in Denmark. Now he has been beaten up in Copenhagen. 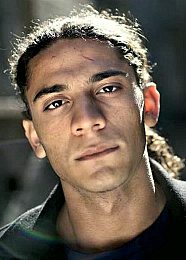 Calling his childhood difficult would be an understatement. The Palestinian Yahya Hassan grew up in a foreigners’ ghetto in the Danish city of Aarhus. He stole, robbed, toked and endured a physically abusive father, who had lived for years in a Lebanese refugee camp until he and his family found a new home in Denmark. At 13, Hassan ran away from school. He became a ward of the state, because he wanted nothing more to do with his parents. He is the child of a dysfunctional family.

Now the 18-year-old has struck back with a volume of poetry. He is settling accounts with his father and his sanctimonious mother. Above all, he attacks the Muslim immigrants “who go to Friday prayers, but spend every other day stealing, fencing stolen goods, boozing and whoring.” Hassan is apparently speaking for the younger generation of Muslim “New Danes” who do not choose to live in the monotony of their misery and do not know what use Allah is.

“I am f***ing mad at my parents’ generation,” he said in an interview for the daily paper, “Policies,” which became the most widely read article in Denmark’s social media. Hassan criticizes the immigrants’ lack of preparation to integrate. One of his poems says, “We had no plan, because Allah had plans for us.” He rages against the older generation, “which defrauds welfare” and “beats its children.”

This enraged tone has made Hassan the youngest star on the Danish literary scene. While other poets are happy to sell 200 books Hassan has a bestseller. His ca. 150 poems went on sale on October 17th and in four weeks have sold 40,000 copies, as reported by the daily newspaper Jyllands-Posten.

The Hostility of the Fanatics

It is no surprise that Hassan is being applauded by “the wrong side.” For xenophobes and immigration skeptics, he is a shining example that integration of Muslim immigrants is impossible. Pure rage, on the other hand, is directed at the young poet by Muslim fanatics. After reading a poem on Danish television, he received almost 30 death threats. This week, he was physically assaulted in Copenhagen’s main train station — by an Islamist who had been sentenced to several years’ imprisonment in 2007 because of a planned terror attack.

The fury of this poetizing public favorite has unleashed a vigorous debate on the integration of immigrants and refugees. Hassan appears regularly in the media, is invited to readings which take place under police protection, and, finally, he has even been featured in The Wall Street Journal. This breaker of taboos is confronting Danish society with uncomfortable truths. He is pointing out that most refugee children grow up in poverty in a concrete wasteland, where violence and racism are part of everyday life.

Hassan says that he has no political agenda. He was eleven in 2006 when Jyllands-Posten commissioned 12 caricatures representing the Prophet Mohammed. One of them showed Mohammed with a bomb in his turban. The caricatures were considered insults in many Muslim countries. There ensued a wave of protest, Danish products were boycotted, the Afghan Taliban even called for a holy war. The cartoonist Kurt Westergaard escaped the attack of an extremist armed with an ax and a knife. “They cannot handle criticism. They are not interested in a dialogue,” says Hassan, addressing his co-religionists. He, on the other hand — influenced by Dostoevsky — intends to write and fight on.

17 thoughts on “An Angry Young Man”