As reported here last weekend, a controversy has arisen in Sweden over the inability of candidates for the office archbishop in the Swedish Church to affirm that Jesus Christ presented a truer picture of God than Mohammed.

One of the illustrious clerics who seemed all too willing to blur the distinctions between Christianity and Islam was the front-runner Antje Jackelén, who has since been elected to become the new archbishop. Our Swedish correspondent LN has translated several articles about the controversy, beginning with an overview of the theologian Eva Hamberg, who left the church rather than be a party to the encroachment of “Chrislam”.

Unfortunately, like so many other Scandinavian institutions — political parties, media outlets, and most private charitable organizations — the Swedish church is state-funded. This means that most non-state alternatives are competitively hobbled, and remain largely vestigial. Ms. Hamberg may thus find it hard to obtain a new, paying position in any non-PC Christian church in Sweden.

A translation from Fria Tider:

Theologian: “Swedish Church has no future”

As a Christian, it is wise to leave the increasingly secularized Swedish church, says Eva Hamberg, a former priest and well-known theologian.

Last week the priest and professor Eva Hamberg left the Swedish church, which she believes has been secularized and politicized to an extent that she can not endorse.

The Straw that broke the camel’s back for Hamberg was the hearing before the archbishop election, when only one of the candidates clearly answered yes to the question if Jesus gives a truer picture of God than Muhammad.

That the Liberal candidate Antje Jackelén yesterday was appointed to become Archbishop Anders Wejryd’s successor has not got Hamberg to look optimistic on the future of the Swedish Church.

“When believers begin to leave, it becomes difficult for the church to maintain its legitimacy. I do not think it has got a future,” says Hamberg to Sydsvenskan.

She says that she has received numerous emails from both clergy and laity expressing understanding for her decision to leave the church and they says that they are planning to do the same.

When asked if she is still a Christian responds Hamberg “Oh yes, that’s why I’m leaving.”

To exit the Swedish Church

It’s very easy to quit the church; you report your withdrawal to your local parish. You can visit, call or write to your church and ask for a form of exit. There is no cost for terminating your membership.

If you regret it, you are welcome to become a member again.

A brief excerpt from an interview with the new PC and very Islam-friendly archbishop, from Svenska Dagbladet:

Religious diversity is an asset

Sweden’s new archbishop Antje Jackelén wants to see more cooperation with Muslim, Jewish and other religious organizations. And the Swedish church can expect to continue to lose members, she says in an interview with the Svenska Dagbladet.

“The church continues to lose members. How can it be stopped?”

“Stopped and stopped. It is clear that anyone who leaves the church is a loss to the church community.”

The Islam-critical and anti-PC site Avpixlat presents a different perspective:

Islamization of the Church

As feared, the politically correct and religion-relativistic bishop of Lund, Antje Jackelén, was elected new archbishop of the Swedish Church. 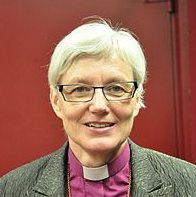 In interviews she now says that she in her new ministry will push for more cooperation with Muslim organizations.

This is in line with her personal motto which is a direct translation of the Muslim war cry of “Allahu akhbar”, i.e. “God is greater”, and which is also the title of a book she has published.

It created an uproar when the influential theologian Eva Hamberg announced the other day her renunciation of the priesthood, leaving the Swedish Church after Jackelén and the other candidates for archbishop equated during the hearing that preceded the election the good judgment of the Muslim prophet Muhammad with Jesus.

This does not seem to worry Jackelén, who on Tuesday tossed out PC phrases like “religious diversity is an asset” and “interfaith dialogue”.

Jackelén has also for a long time embraced Multiculturalism in Malmö, where she actively worked to adapt the Christian church so as not to annoy the ever-increasing Muslim population in the region.

The fact that the Swedish Church, as a result of this as well as the demographic change with increasing number of Muslim immigrants, is steadily losing members, Jackelén does not find problematic but “something that the Church has to accept”.

Jackelén will willingly sacrifice members of the Swedish Church to continue on the past decade’s chosen path of political correctness, of hiding illegals, employing of imams, etc. — a church for the immediate mourners as she and colleagues Eva Brunne [leftist bishop of Stockholm] and Helle Klein [former editor of the national slush newspaper Aftonbladet], will continue to conduct an inquisition against the Sweden-friendly national movement, the old Church of Sweden.

What Jackelén at all costs wants to stand in the way of is a Swedish national church as guardian of our Christian cultural heritage, being part of the foundation that made the West strong, successful and prosperous, in their role of acting as an antithesis to Islam, which subjected countries and entire continents to conflict, terror, oppression, stagnation, poverty, and wars.

24 thoughts on “The Dhimmi Church of Sweden”