Our Israeli correspondent MC returns with a reflection on the commonalities that can be observed among Socialism, National Socialism, and Islam. 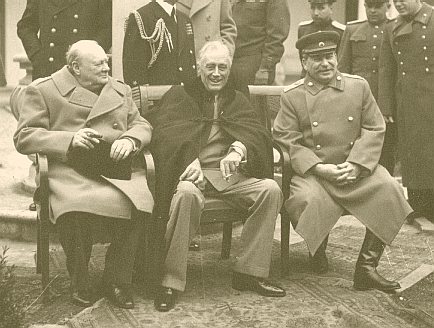 Of note was the utter contempt with which the journalist approached a right-of-centre position, and the holder of that position.

I grew up among Socialists, but I did a very unacceptable thing: I kept an open mind.

I suppose it started around the family television, there used to be a programme “All our Yesterdays: This Week 25 Years Ago”.

I was really too young to understand this programme, but in an unheated house in winter there was only one room kept warm enough for comfort, and the TV was in that room, and, of course the TV dominated.

I could not understand why National Socialists were bad, but Socialists were good. Yet my grandfather had been a convener for the early Labour Party in the twenties; Socialism was not to be questioned.

However, being very naïve, I asked my father, who just happened to be at home at the time on one those rare visits (he was an officer in the Royal Navy). My father did not answer the question; he just made me feel about six inches (rather than four feet) tall.

I had touched on a very sore point, and perhaps a key deception that is a prime cause of the trouble our countries find themselves in today.

It was many years later that I became comfortable with the idea that National Socialism is just another form of Socialism, one which is almost identical to Stalinist Communist Socialism.

The idea of extreme left, and extreme right is a fabrication. Stalin invaded Poland two weeks after Hitler did. In 1941, the Allies had to rehabilitate Stalin by creating a propaganda myth:

“Hitler bad, Stalin good. The political left is honest and caring; the political right is corrupt and greedy.”

Many have fallen for this meme, and it is now burnt into the BIOS (Basic Input Output System) of those who have “never thought of thinking for themselves at all”, a.k.a. Lenin’s useful idiots .

So Mr. Indoctrinated British Journalist approaches the dialogue with a preconceived notion that the Baron is part of a greedy and corrupt right wing establishment only worthy of the contempt of civilised “educated” people.

The sign of a good journalist is that he or she can recognise bias, and can therefore contain contempt. I have utter contempt for the leftist establishment; but then, I make no claim to being a journalist either.

I never knowingly met a Jew until University, where my Maths tutor was Orthodox. I got on very well with him.

I had my first clash with the reality of Socialism at university (in the form of the Student Union) as well, and I discovered to my horror that the reality of hard-left Socialism was extremely nasty. As a moderate Socialist, I was deemed contemptible and was treated with derision. There was no respect due to anything or anybody that did not conform to their core beliefs.

Islam too holds everything outside of Islam in contempt, and there is commonality of belief in this. In fact, Socialism and Islam hold so much in common it prompts the question: Did they come from the same source?

In a way, yes; Socialism arose through the trashing of the Bible in the 19th century. It resulted from the combined culture shocks of Darwin, Freud and Einstein. Darwin posited the first realistic alternative to creation, Freud redefined the human psyche, and Einstein redefined Newtonian physics. From these culture shocks arose a belief system based upon the idea that man is God.

Islam is, in effect, the worship of Mohammed, a 7th century brigand king who espoused the belief that one man (himself) could be the sole mouthpiece of god. For those who delve, there is a connection here. Mohammed used Allah as a kind of ventriloquist’s dummy — whenever he needed to make a statement, Allah, would give it voice through Mohammed. So Islam is a belief system that sees a man as God.

Any difference is semantic.

In their extreme forms, both Socialism and Islam believe in world domination, both use violence and terror as acceptable forms of evangelism, and both believe in an elite vanguard controlling the backward masses. Islam shows a contempt for women, seeing them as live ‘meat’ and other more vulgar epithets, ensnaring men in their evil sexuality and thus denying women entry into heaven. The Socialists show contempt for women in the role of mother, carer and giver of life; in their view women should be men, and work for a living. Women should bestow their sexual favours according to need and desire (especially the needs and desires of the Socialist elite) and, if necessary, murder the consequences.

The contempt shows up in many ways. In this case, the Baron is guilty of “inhumanity” because a Norwegian psychopath happened to read his blog posts and agree with some of them. Whilst this association is totally irrational, contempt makes it plausible in the context that, if the Baron had not expressed (contemptible) opinions, the shootings might not have happened.

Curiously, this fluffy teddy-bear logic endows the Baron with a supernatural ability to control events, and thus be responsible for them, by expressing his opinions, in writing, in a blog where he has no control whatsoever on the readership. This is the stuff of fairy tales!

And of such is the poison of Utter Contempt.