As promised in the comments here a couple of days ago, Paul Weston presents the evidence for a carefully planned takedown of the English Defence League by the “Conservative” British government. 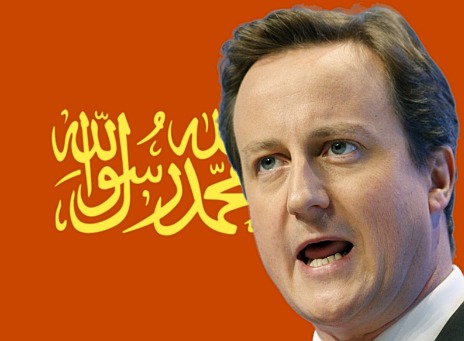 David Cameron Declares War on the EDL
by Paul Weston

“The hon. Gentleman speaks not only for his constituents, but, frankly, for the whole House in deprecating the English Defence League and all it stands for. On its attempt to say that it will somehow help to restore order, I have described some parts of our society as sick, and there is none sicker than the EDL.”

When Cameron talks about Islam, however, he adopts a slightly different approach:

“Many Muslims I’ve talked to about these issues are deeply offended by the use of the word ‘Islamic’ or ‘Islamist’ to describe the terrorist threat we face today… it is mainstream Britain which needs to integrate more with the British Asian way of life, not the other way around.”

So some Muslims feel upset that Islamic terrorists are carrying out terror attacks both in the name of Islam and in accordance with the Koran, which Cameron apparently sympathises with, but when it comes to the EDL he hates everything they stand for?

But what does the EDL stand for? They would rather our vulnerable young girls were not gang-raped; that sharia law should have no place in Britain; that young girls should not suffer female genital mutilation; that imported imams should cease encouraging sedition, terrorism, anti-Semitism, the murder of homosexuals, the inequality of women, etc. etc. etc.

And Mr Cameron is against The EDL And All It Stands For?? The British government, police and media were able to keep the countless Muslim gang-rape abominations away from the mainstream news-headlines for over a decade, so perhaps one can understand Cameron’s hatred of the EDL, without whom the internationally embarrassing Muslim gang-rape news would have been buried for another decade — along with several thousand new victims…

So no one should be surprised that a traitor and a quisling — for that is what David Cameron is — who clearly hates his country, its traditions, and its people, should now be trying to designate the EDL a terrorist organisation with a view to closing them down completely.

In order to do this, he has assembled a varied group of high level people to get the process underway. Cameron, incidentally, does not mix socially with the centre-right. Cameron clan dinner parties hosted by his alleged Marxist wife attract predominantly the great and the good of the leftist world, which perhaps include The Guardian’s Mark Smith, who wrote the following on 13 March 2013:

The EDL is exploiting concerns about sex-grooming gangs to fuel its anti-Islam agenda and help forge networks with far-right groups across Europe, according to a university report… Alexander Meleagrou-Hitchens of KCL’s International Centre for the Study of Radicalisation said: ‘The EDL has successfully exploited concerns about the sex-grooming gangs in the north of England, turning the issue into one of Islam versus the west…there’s a danger that the UK will export this kind of vicious, far-right activism to the rest of the continent.’

The EDL and its partners have worsened community tensions and further promoted ideas that helped inspire the Norwegian mass killer Anders Breivik… this ‘rape jihad’, as it has become known, is a significant concern for the EDL, says Meleagrou-Hitchens. ‘Interest has risen since revelations in the British media about the existence of sex-grooming gangs made up of Muslim men of south-Asian origin.’

The far-right group is sharing these tactics with partners in Denmark, Norway, Sweden and other countries, the report found. The EDL has had an online presence for some time but it is making efforts to move to the physical world… the attacks in Norway (Breivik) were the first example of an individual inspired to pursue terrorism in direct response to perceived Islamisation, and they are unlikely to be the last.

Alexander Meleagrou-Hitchens, the author of the report quoted by the Guardian above, is no lightweight. His organisation, based at King’s College London, is called the International Centre for the Study of Radicalisation (ICSR) which is a counter-terrorist organisation taken very seriously by the British government.

The ICSR held a conference recently, which it described as follows:

At this major conference, experts, analysts and policymakers from across Europe will discuss the evolving threat from a new breed of far right extremists, the so-called “Counter-Jihad” movement. The event will also launch ICSR’s latest policy report A Neo-Nationalist Network: the English Defence League and Europe’s counter-jihad movement written by Alexander Meleagrou-Hitchens and Hans Brun.

The conference was moderated by Professor Peter Neumann and Dr. John Bew of ICSR and was hosted in partnership with the Community Security Trust (CST); the Center for Asymmetric Threat Studies (CATS) and the Swedish National Defence College which has high level military links.

The keynote speech at this ICSR conference was delivered by the Conservative minister James Brokenshire, Parliamentary Under Secretary for Security who made some of the following observations, as reported by the Evening Standard:

Right-wing extremists could pose an al-Qaeda-style threat in Britain, the security minister warned today. James Brokenshire said the “ugly face” of the far Right was a “real” danger to public safety and had the same aim as Islamist extremists of wanting to reshape society… He warned of the risk of attacks by Right-wing “lone wolves” [a.k.a. Breivik — PW].

He also said the activities of the English Defence League could ‘stoke radicalisation’ and push people towards terrorism. Such groups “can provide ‘gateway ideologies’ through which individuals may migrate to more extreme organisations… where these lines blur, from a counter-terrorism perspective, is where the real risk lies.’

The people at this conference range from the Neo-Communist hard Left, all the way through to genuine military counter-terrorism departments and high level politicians. When they invoke al-Qaeda and Breivik in relation to the EDL, we can see clearly the direction David Cameron is taking. This is a blatant attempt to link the EDL with genuine terrorism in order to close them down.

This is just the first stage. Get genuine counter-terrorist organisations and friendly left-wing media outlets like The Guardian to denounce the EDL, link them to Breivik and al-Qaeda and then get Britain’s government security chief to say the same. Stage two — having set the EDL up for a fall — is to place an MI5 man within the organisation; give him a fake bomb and a handy mosque and arrest him in a huge televised police operation just before he was due to “set it off” then blaze the headlines across the country: “EDL Terrorist Bomber Arrested at East London Mosque” and bob’s your uncle, proscribe the EDL under counter-terrorism laws.

If they succeed in this, which I think they will, then Britain will have taken just another step toward temporary totalitarianism which will replaced well before 2050 by outright Islamic rule. Cameron is now on the list of quislings who must one day be held accountable for treason.

68 thoughts on “David Cameron Declares War on the EDL”