Last week President Joe Biden gave a speech in which he warned Americans that democracy was at stake in the midterm elections. He implied that people who voted for Republican candidates would be enemies of democracy. Furthermore, any conspiracy theorist who questioned the election results would be a danger to the country, and possibly a seditious domestic insurrectionist.

In light of the above, and with the wellbeing of our great democracy in mind, I’m happy to report that John Fetterman defeated Mehmet Oz in the senatorial contest in Pennsylvania. Mr. Fetterman is an eloquent, accomplished statesman.

I can think of no one who is better qualified than John Fetterman to represent the great state of Pennsylvania in the hallowed halls of the Capitol in Washington D.C. 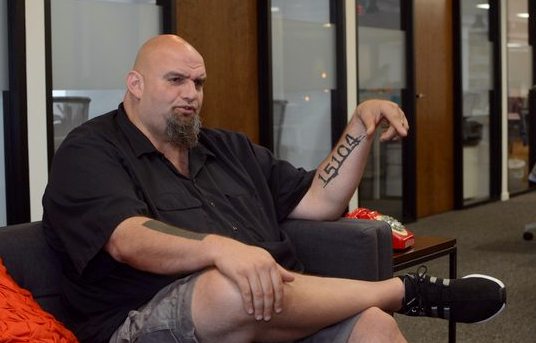 OK. With any kind of luck the DHS proctors won’t have read this far into my post, so I can now speak my mind.

In case you’ve been vacationing in the Asteroid Belt these past few months: John Fetterman was running against Dr. Oz for a Pennsylvania seat in the U.S. Senate. After the campaign got underway, Mr. Fetterman had a stroke, and disappeared from public view for a while. When he returned, he had obviously suffered cognitive damage as a result of the stroke. It was difficult for him to understand speech, and he had trouble speaking coherently. He tended to spout gibberish worse than anything uttered by Joe Biden. In his single debate with Dr. Oz, his performance was appalling.

Bearing all this in mind, I think the senatorial election in Pennsylvania was the most important contest of the midterm elections.

Why do I say that?

A quote from Theodore Dalrymple is apropos:

Political correctness is communist propaganda writ small. In my study of communist societies, I came to the conclusion that the purpose of communist propaganda was not to persuade or convince, not to inform, but to humiliate; and therefore, the less it corresponded to reality the better. When people are forced to remain silent when they are being told the most obvious lies, or even worse when they are forced to repeat the lies themselves, they lose once and for all their sense of probity. To assent to obvious lies is in some small way to become evil oneself. One’s standing to resist anything is thus eroded, and even destroyed. A society of emasculated liars is easy to control. I think if you examine political correctness, it has the same effect and is intended to.

Anyone who is forced to accept the farcical results from Pennsylvania is being grievously humiliated. Some people may really believe that the vote in the Keystone State was truly free and aboveboard, and that John Fetterman won fair and square (the gents at Power Line may fall into that category; I’m not sure). But most know they have been had.

Anyone who has any significant political profile, however, will be disinclined to express his opinion in public; otherwise he might draw the attention of Homeland Security, and be summoned to sweat through an interview with a couple of FBI agents in a claustrophobic little room.

For all dissidents in the political class, this is total humiliation. They will feel compelled to affirm that the Lie is true.

With that as a preface: late last night Vlad and I had a conversation on Skype about the election (he has already posted about it here). Below is our exchange. It’s not verbatim — I tidied it up and removed extraneous material — but it preserves the essence of what we said:

Which is exactly what happened. By the time I woke up this morning, the great Republican tsunami had turned into a little ripple in the bathtub.

The exception, of course, was Florida. But that was a planned exception.

Florida is allowed to be a dissident state, because Ron DeSantis is being set up by the power brokers in the Republican machine to be the alternative to Donald Trump in 2024, in order to make sure that the MAGA movement is effectively gelded. It’s a similar process to what was done to the Tea Party ten or twelve years ago.

It’s important to remember that the modern Republican Party, backed by Wall Street and global Capital, is not designed to be an alternative to Democrat rule. It’s intended to complement it, to provide voters with the illusion that they have a choice, and thus siphon off the votes of people who might otherwise coalesce into a force for true dissent.

From the Deep State’s point of view, having one state that is relatively free and unfettered (pun intended) is a small price to pay for keeping the rest of the country in lockstep with the globalist agenda, and ripe for Build Back Better.

39 thoughts on “It’s Gone Beyond Gaslighting”