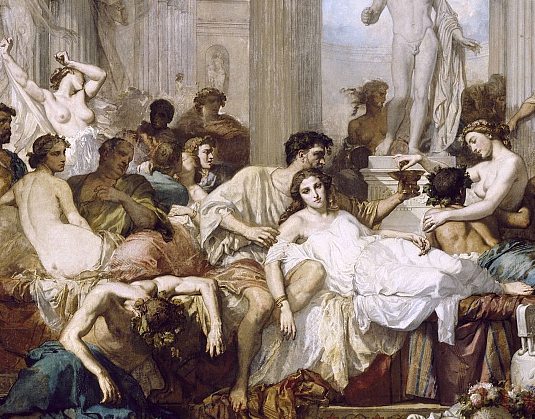 The following account from Germany reports on the sordid antics of the city council of Stuttgart, but the same sort of lunacy and absurdity can be seen in any European country west of the Elbe, and in all the Anglo-Saxon nations. Men are women, freedom is slavery, words mean whatever the Left wants them to mean, and the entire culture circles the drain.

Many thanks to Hellequin GB for translating this article from Boris Reitschuster’s website:

Under pressure from the Greens: Tampon machine in the men’s toilet of the town hall

During Latin lessons at school, we didn’t deal much with the late phase of Rome — the decadence that spread there and then led to the collapse of the Roman Empire. Today I have to say: It is probably a mistake that this phase is treated so negligently in the curricula. Because otherwise some parallels would catch the eye. And the red-green cultural revolutionaries could not easily and successfully make such comparisons taboo, as Guido Westerwelle once did.

I also had to think of the term “late Roman decadence” when I read the following message: “Gaga installation in Stuttgart City Hall: Stuttgart is hanging a tampon machine in the men’s toilet”.

No, you did not misread that. The message is real. It is in the Bild today. And, at least according to Google News, not in any other German platform.

Particularly piquant: The madness was realized by a CDU man, of all people. How the once-conservative party — which today even denies the fact that it was once conservative — has let itself be made into the jumping jack of the red-green zeitgeist is simply phenomenal. When the champagne-left culture warriors yell, the Christian Democrats stand to attention. Above all, party leader Friedrich Merz, who has honestly earned the nickname “The Tumbler”, and it feels like he politically spends more time vertical than upright.

In this case, it was Mayor Frank Nopper from the CDU, under whose aegis a machine was installed in Stuttgart City Hall that dispenses tampons and pads free of charge — in the men’s toilet, as Bild writes. And asks: “A mistake, or is the man-woman-diverse madness reigning here?” The newspaper gives the answer immediately: “The Christian Democrat was required to implement a wish of the town hall majority (including Greens, Left).” In fact, Nopper in the City council voted against installation. But after Red-Green overruled him, he didn’t have the guts to put the matter on hold. Instead, he bowed to madness — just like Merz is constantly bowing.

How far should the pandering to obviously absurd demands from reality-resistant ideologues go? Will men’s bras come soon so that women don’t feel discriminated against? You laugh — but in Berlin women’s urinals are a serious issue because the ideologues find it discriminatory that only men can urinate standing up (the Tagesspiegel wrote about it under the heading: “Feminist peeing: In Berlin there is now a urinal for women”).

At least some resistance is still stirring in the CDU against the politically organized madness that simply wants to put biological facts out of action. Group leader Alexander Kotz says, according to the picture: “Completely absurd! As a man, what should I do with tampons? And I can’t bring it for my wife either.” Kotz is by no means an “enemy of progress” when it comes to gender — he lives with a man.

“The bizarre tampon dispenser goes back to an initiative by the Greens,” writes the newspaper: “They had requested that the menstrual items be made available in all public toilets ‘without ifs and buts’. The motion went through with the votes of the Left council majority.”

You have to let the reasoning of Green parliamentary group leader Petra Rühle melt in your mouth: “Many people with menstrual bleeding do not identify themselves as women. It is a matter of course to provide them with tampons in the same way as menstruators who identify as women.”

But apparently there is confusion about the “alternatives”, which are increasingly standing for alternative facts, for example here in biology. Because before the statement by her parliamentary group leader, her party friend Christine Lehmann had believed in a mistake when asked by Bild: “I see no point in offering men tampons.”

City hall spokeswoman Jana Steinbeck explains the men’s tampon vending machine to the newspaper as follows: The Department for Individual Equal Opportunities is providing free menstrual products in a pilot project. Steinbeck: “The products are available in both the women’s and men’s toilets so that they can also be used by non-binary or trans people.”

I’m so sorry — but I simply don’t have the words to comment on this madness in a way that is fit to print and legally clean. And I don’t dare tell my friends abroad about it. For one thing, some might think I’m telling them fairy tales. On the other hand, the residual basic trust that Germany still has, thanks to the hard work of generations, could disappear.

In addition, as a journalist, I am overwhelmed with an explanation — I think that psychologists would be more in demand, if not psychiatrists.

The problem, as I see it, is that those who are incapable of creating added value only come up with unusual ideas, which are then bought by the Tax-Michel with a compulsory levy. Which group is it that is unable to create value? Well, the ones that we’re forbidden to talk about!

The same game is played with all those ideas. The main thing is that they are new and meaningless, because then the majority of people will believe them.