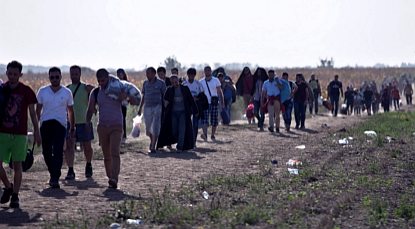 The migrant situation in the Balkans is heating up again. The following Austrian report discusses the situation in Serbia.

Asylum report from Serbia: They came with machine guns

The worldwide mass migration of the population to the countries of Western Europe, which began in the spring of 2015, is taking the form of a frightening mass panic that is rolling across the southeastern Balkans northwest of the European Union.

Wars, various political or colour revolutions at the beginning of the second decade of the 21st century led to large population movements in different directions. Western Europe was hit hardest by these unfortunates. In early 2015, millions of refugees from the Middle East and North Africa poured north via southern Europe and the Mediterranean. The spring of 2022 brought a new, potentially larger wave of migration from Ukraine (six million) and migration experts predict a huge new wave from East Asia and Africa could swamp Europe with more than ten million people in despair.

The Republic of Serbia is in a state of emergency these days due to the arrival of thousands of uninvited “guests”. More than 150 kilometers of the route of the “army” of migrants got caught in the protective net of barbed wire set up by a decision of the Hungarian government in May 2017. With the high security wire barrier, the energetic Hungarian border police manage to respond immediately to the massive, aggressive and almost suicidal onslaught of masses of unwanted persons.

The daily arrival of more and more desperate people who do not lose hope of overcoming all obstacles and entering the fairytale life of the democratic West. Due to the impossibility of leaving the Republic of Serbia, they cause enormous problems for the local population living near the border. Peaceful villages and estates are overrun by strangers, who, locals say, are aggressive and destroy their property.

The police and special forces of the Serbian gendarmerie are making great efforts to restore order and peace and protect the local population. In a special police raid, which took place in the early morning hours of October 4, 200 foreign citizens without legal residence permits on the territory of the Republic of Serbia were detained in the village of Srpski Krstur. According to the police officers’ report, firearms, knives, a large sum of money and an AK 47 Kalashnikov automatic rifle were seized.

Migrants from all over the world

On the streets of Belgrade nowadays a large presence of unusual “guests” is visible from India, Tunisia, Burundi, North Africa and some other countries which the majority of Belgraders would hardly find on a geographical map. They come to Belgrade on regular flights and enter the territory of Serbia without restrictions, as they are in the regime of visa-free entry and exit. According to the first estimates, 300 “tourists” arrive by this route every day; according to rumors it could be more than 1,000.

These migratory movements were also noticed by the EU, so that shortly afterwards the Austrian Interior and Foreign Ministers Gerhard Karner and Alexander Schallenberg (both ÖVP) and the Hungarian Foreign Minister Péter Szijjártó flew to Belgrade. There they met with Aleksandar Vulin, Minister of the Interior of the Republic of Serbia.

“Serbia will never be a parking lot for migrants from any part of the world, but the European Union should selflessly help Serbia defend itself against invasion of immigrants from Turkey, Greece and North Macedonia.” —Aleksandar Vulin, Serbian Interior Minister

At the meeting of European home affairs ministers in Luxembourg on October 14, 2022, Home Affairs Commissioner Ylva Johansson announced that European Commission President Ursula von der Leyen had been in contact with Serbian President Aleksandar Vucic when she said a commitment had been made that Belgrade would harmonize its visa policy with the European one. Johansson did not rule out the possibility of reintroducing visa requirements for citizens of Serbia entering the EU due to the situation.

Tens of thousands are waiting in front of Europe’s gates

Experts on migration movements in Europe agree that with such an increase in migration, 30,000 homeless people from all over the world could soon be found at the gates of Europe. The Serbian authorities responsible for the care of immigrants indicate that around 6,000 people are currently registered on Serbian territory in their lists.

Unofficial estimates put the number at more than 15,000, and to that number must be added 16,000 people who have fled Ukraine. These are recorded in a separate statistic and housed and looked after according to a different system.

I’m pretty sure that what they confiscated here was just the tiniest tip of a massive iceberg of weaponry and cash that is smuggled into Europe by these Bashi Bazouks. And I’m pretty sure that this will be used to demand an even quicker implementation of digital currencies. I’m also sure that their stockpile of ammunition will last more than just two days, as is apparently the case for the German Armed Forces. All of this is designed to end up in a valley of blood and tears. One can only hope that when it happens these designers will get their just rewards paid out in full — Romanov style.

2 thoughts on “Migrant Storm on the Balkan Route”