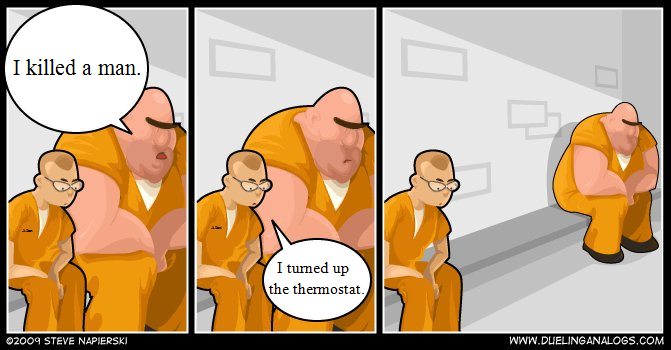 Swiss citizens will have to be very careful with their thermostats this winter, or they may be facing a long stretch in the Big House.

Many thanks to Hellequin GB for translating this article from eXXpress:

Anyone who keeps it warmer than 19°C [66°F] at home during a gas crisis or heats the water in the pool too much must expect a severe prison sentence in Switzerland: The federal law on national economic supply provides for high fines — and for very bad “heating sinners”, even up to three years’ imprisonment.

We Austrians can only hope that the Green members of the government do not want to adopt this tough approach from the Swiss: The federal law on the national economic supply of our neighbors also stipulates harsh penalties for all those citizens who do not comply with the gas shortage measures or want to comply with government guidelines. And according to the Swiss Blick, particularly unreasonable “heating sinners” face not only high fines, but even up to three years in prison.

And that’s what Swiss law stipulates: In buildings heated with gas, the interior rooms can be heated to a maximum of 19°C, hot water can only be heated to 60°C [140°F]. Electric heaters or hot air tents are then prohibited, as is the use of a sauna and the opening or heating up of swimming pools. Anyone who disregards these requirements faces imprisonment or a fine. In the case of intentional action, a prison sentence of up to three years or a fine is possible. Even in the case of negligent violations of the measures, a fine of up to 180 daily rates is conceivable. These requirements and the threatened penalties are now causing heated debates: the mere question of whether measurements were being taken in the right place — it tends to be cooler on an outside wall than on an inside wall — could concern the Swiss courts. And: snitches and “heating block wardens” would then flourish during the gas crisis — the authorities are unlikely to intervene without reporting by neighbors. Economics Minister Guy Parmelin doesn’t really want to start a “broad-based hunt for heating sinners,” but there should be “selective controls”.

Although this law is not yet active or set in stone, it clearly shows the intent of those in power, the complete and utter control of each and every aspect of our lives, no matter how small, and no pebble will be left unturned to achieve it.

11 thoughts on “Turn up the Thermostat, Get Three Years in the Slammer”