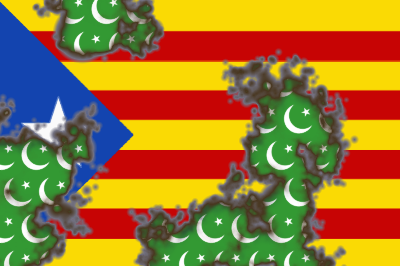 Many thanks to Gary Fouse for translating this article from El Periodico. The translator includes this explanatory note:

Police in Catalunya have arrested a Moroccan man they say was preparing to carry out an attack. He was arrested on Sept 2 and had previously been connected to a Spanish Civil War grenade found last May in an apartment he was renting with others. Apparently, he was monitored but not arrested until Sept 2. I had to check other Spanish papers to clarify that point.

Arrested in Empuriabrava: a man ready to commit a jihadist attack in Catalunya

The man, who was found in possession of a Civil War grenade last May, will be expelled to Morocco.

The Catalunyan police arrested a Moroccan resident of Empuriabrava (Girona) who was ready to commit an attack in Spain. This is a man who had already completed his process of jihadist radicalization, in which, stressed an inspector of the General Commissariat of Investigation of the Catalan police in statements to El Periodico, he had integrated arguments defending the use of violence against those he considers enemies, and had the intent to carry out a violent act.

“The threat of violent action has changed a great deal,” notes the same police source, alluding to the ease that the digital environment has given to propagandists of violent ideologies, such as jihadism and white nationalism. Now it is no longer necessary for the existence of a cell in permanent contact with a central organization, as happened in the case of Al Qaeda. And the cases of self-radicalized individuals, like the person arrested in Empuriabrava, are frequent. Without any contact with the Islamic State, he had come to his positions and himself had the same intent to travel to countries in conflict.

A grenade from the Civil War

In a raid carried out on an occupied residence in Empuriabrava, Catalan police found an explosive from the [Spanish] Civil War. The owner of this grenade, a man aged 30, also had various knives. His identifying data came into the hands of investigators, who put the magnifying glass on him.

When it could be verified that this involved a radicalized individual, who had changed his appearance and adopted more aggressive behavior, the National Court was advised. And police surveillance was activated to prevent him from committing an attack before being arrested. In a statement this Monday, the Catalan Police stressed that “at no time was there any risk to the public.”

On September 2 he was arrested, and by order of the National Court detained in an Internment Center for Foreigners (Cie) pending a process of expulsion for reasons of national security. The decision, which fits within that provided by law, is surprising, because it also implies the loss of visual control of a suspect the Catalan police consider to be sufficiently radicalized to carry out an attack.

The arrestee defended jihadist ideological ideas — which are a distortion of Islam — and in addition to giving the impression of wanting to stage an attack, also carried out “an intense process of massive dissemination of content” to other persons to motivate them to take the same step.

The [Catalunya] Minister of Interior, Joan Ignasi Elena, warned that “the terrorist threat continues all over Europe,” assured that all the resources necessary to protect the public will be utilized, and congratulated the Catalan police for their work.

The Catalan police remind citizens that if there are indications or suspicions related to terrorism, they should communicate them through 937285220 or email mossos.terrorismo@gencat.cat.

7 thoughts on “Jihad in Catalonia”