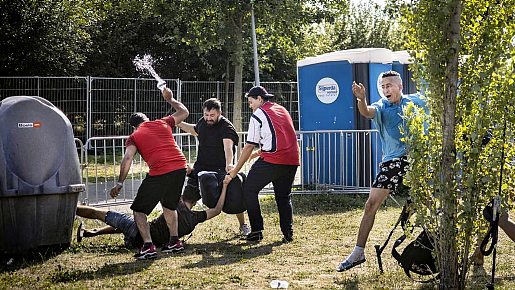 I posted on Tuesday about ructions at the asylum center at Ter Apel in the Netherlands. Apparently the situation there has deteriorated further, with culture-enrichers now openly carrying knives in front of the facility.

Many thanks to Gary Fouse for translating this article from Algemeen Dagblad:

Ter Apel mayor: “People are walking around in front of the asylum center with bladed weapons”

In front of the reception center in Ter Apel, people are walking around with bladed weapons. That is the opinion of Mayor Jaap Velema from Westerwolde, who has designated the area in front of the asylum center as a risk area. He wants the cabinet “in the coming days” to devise measures to relieve the asylum center. Otherwise, a partial closing is coming.

In the last two weeks, the situation has gotten worse than it was, Velema says in a conversation with this site. “There are more and more people, and there are more and more violent incidents. Therefore we must take a step forward and designate the area in front of the reception areas as a safety-risk area.”

According to the mayor, the violence is mainly caused by asylum seekers from safe countries in North Africa. “They are in the asylum process, staying in Ter Apel, and are responsible for shoplifting, nuisance offenses, and also theft from other asylum seekers. Then they steal their cell phones, and that leads to disturbances.”

The mayor states that some asylum seekers have “improvised stabbing weapons”, scissors, for example. “And also this: This week, we have taken away tents from in front of the reception center. A considerable number of pegs were left. The possibility exists that these could also be used as weapons. Therefore, we want the police to be able to preventively search risk groups and increase video camera surveillance.”

The aim of the operation is to be able to better guarantee safety for harmless asylum seekers and the employees of the Central Agency for Reception of Asylum Seekers and Immigration and Naturalization Service, for example. But the step taken this Friday is no solution, Velema warns. “The government must set up a central place in the country where asylum seekers are received, so that from there they only go to Ter Apel by appointment. Asylum seekers must have clarity concerning their procedure. That is missing now.”

Velema states that he wants to see a quick improvement. “The cabinet, the provinces, and the municipalities must take steps in the coming days. Two-thirds of the municipalities are still doing nothing upon reception. In the north, meanwhile, we have prepared an emergency order, which also provides for the partial closure of the application center here. That is a decision by the chairman of the regional security here in close consultation with me. As far as I am concerned the moment when that comes up is getting closer.”

It has been a busy week in front of the doors of the application center in Ter Apel. The people who are there during the day, are waiting for the first or next step in their asylum procedure. Due to a personnel shortage and a lack of flow in the asylum chain, the procedure is now very chaotic. The intention is that the asylum seekers who cannot go directly to a reception center could spend the night in an emergency shelter, but not all asylum seekers want that. They fear that they will lose their place in line if they sleep anywhere but Ter Apel.