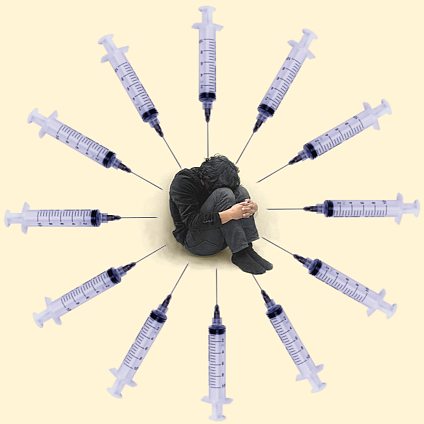 On the issue of “vaccination” against the Wuhan Coronavirus, the Powers That Be have moved from nudging to the carrots-and-sticks approach to vax passports, and finally to mandatory “vaccination”.

The mandatory jab is our future. Sooner or later it will come to every Western country. The only question for the unjabbed is: What will you do when the vax mandate knocks at your door?

Quebec has not yet imposed a full mandate on its citizens. However, anyone who wants to purchase hard liquor or cannabis must now show proof of vaccination. A large number of stoners and dipsomaniacs have apparently decided that remaining unvaxed is not the hill they want to die on, and have rushed to get the needle.

Meanwhile, Greece is considering imposing a mandate on citizens over 50, modeled on the Italian version.

In the following video, Renato Brunetta, the minister of Public Administration in the government of Mario Draghi, announces that all Italians over the age of 50 must get the vax.

Nehammer: Despite ongoing protests, vaccinations will be mandatory

In Vienna, tens of thousands of people took to the streets against the Corona measures on Saturday. In the center of the Austrian capital, they protested above all against the mandatory vaccination that the government decided on. According to the police, around 40,000 people took part in the demonstration.

According to the police, the protests against the corona measures were mostly peaceful, but there were some arrests. The participants demonstrated in choirs and on posters against the decision of the Austrian government to introduce compulsory vaccination on February 1st.

Despite the ongoing protests against this measure, Federal Chancellor Karl Nehammer declared that the mandatory vaccination should be implemented as planned. “There is no question for me that it will come,” he said in a radio interview on Saturday. Compulsory vaccination is necessary “to show that vaccination is actually the way to ensure that we do not constantly need measures that restrict freedom,” added the Chancellor, referring to the lockdowns that have been imposed since the beginning of the pandemic.

Austria recently recorded an increase in those who tested positive. The seven-day incidence rose again on Saturday, now at 525 cases per 100,000 residents. Nehammer is also one of those infected. According to his own statements, the Chancellor has so far developed “no symptoms”. “The vaccination makes me feel very good,” he said in the home-based interview.

Hat tip for the English-language articles: Reader from Chicago.

9 thoughts on “We Have Ways of Making You Vax”