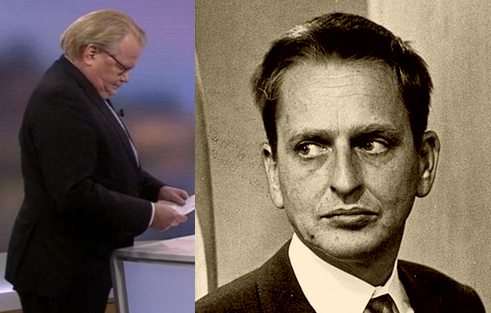 President Joe Biden is notorious for having plagiarized a speech by Neil Kinnock, the leader of the British Labour Party, back in 1987. Our plagiarizer-in-chief is now in good company, as the Swedish Defense Minister faces a similar scandal.

The Minister of Defense plagiarizes speech by Olof Palme about “racism”

Minister of Defense Peter Hultqvist (Social Democrats) has written a debate article full of empty formulations about so-called racism. Many of the phrases were plagiarized directly from a speech by Olof Palme in 1965, Fria Tider can show.

Peter Hultqvist warns in his new debate article that “the gates of barbarism” will be opened if “humanism falls” and “racism” is given free rein.

However, both the outline and several formulations are in fact taken from the speech “We and the foreigners” that the then-newly-appointed Minister of Infrastructure Olof Palme gave on Swedish Radio on Christmas Day of 1965.

Just as in Palme’s speech, Hultqvist states in the introduction to his debate article that Swedes pride themselves on being open-minded and tolerant, but that it is unfortunately not that simple.

“Racist theories that are cloudy in nature and intellectually difficult to explain have not gained a foothold,” writes Peter Hultqvist.

Both Palme and Hultqvist then state that the racist prejudices are due to “one’s own failures” and “fear”.

“Reasoning about place of birth, skin color or religion has very little to do with the human qualities of the individual,” the Minister of Defense further writes.

This is what Olof Palme said:

“A person’s skin color, race, language and place of birth have nothing to do with human qualities.”

“But it’s shamefully easy to take when someone has to put themselves in a better position in relation to others.”

From Palme, the wording is:

“But it is shamefully easy to use for those who feel inferior — in the workplace, in social life, in the competition for the girl or the boy.”

Other formulations about “equal value for all people” and “inferiority” in the Minister of Defense’s debate article also seem to be taken directly from Olof Palme’s speech from 1965, although Hultqvist’s formulations are considerably less elegant than the original’s.

Palme’s radio speech was groundbreaking in the sense that it popularized “equal worth for all”, “diversity gives strength” and similar phrases that later became central when politicians decided that Sweden should be transformed from a homogeneous country to a multicultural one with Third World inhabitants.

Was it the perpetrator Palme himself who introduced the idiotic concept: “allas lika värde” = “everybody’s equal worth”?

4 thoughts on “A Plagiarist as Minister of Defense”