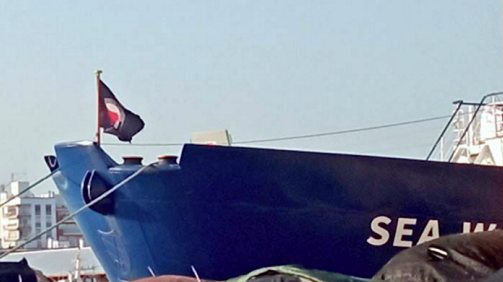 A boat full of puir wee African bairns has finally been unloaded at a Sicilian port, thanks to the timely arrival of a storm at sea, which raised the tear-jerk quotient high enough to force the Italian authorities to allow the landing.

The migrant ferry Sea-Watch 4 had been waiting for a “safe harbor” to be assigned since Monday; Italy and Malta refused several times. Then a storm came up, the ship got caught in a storm off the coast of Sicily and the crew declared a state of emergency. Now finally Italy took pity and gave permission to enter the port of Augusta, where the shuttle ship arrived yesterday his 461 guests on board, mostly young men. 14 guests were evacuated in advance, sick and pregnant women.

SOT, Alberto Mallardo, Sea-Watch spokesman (Italian): “Of the people on board, 149 are unaccompanied minors, 9 are pregnant women and several small children. You all have to disembark now and find a place in our country.”

They are not the only “safe havens” in Europe, especially when those willing to travel are picked up on the Libyan coast. The collected could have been allowed to go ashore in Tripoli, for example, instead of holding them on board for eight days and playing a number of misery and suffering in order to extortionately force entry.

Sea-Watch announced on November 23, 2021 on Twitter: According to international law, we have to bring people rescued from distress at sea to a safe place that can only be in Europe. The authorities must finally allow the landing!

You put your own international law together, the word “next” is simply left out and only “Europe” is added.

Libya faces along to the Mediterranean and had been effectively the cork in the bottle of Africa. So all problems, economic problems and civil war in Africa — previously people fleeing those problems didn’t end up in Europe because Libya policed the Mediterranean. That was said explicitly at the time, back in early 2011 by Muammar Gaddafi: ‘What do these Europeans think they’re doing, trying to bomb and destroy the Libyan State? There’s going to be floods of migrants out of Africa and jihadists into Europe, and this is exactly what happened. — Julian Assange