TL Davis has updated his important documentary “Lies of Omission” for 2021. The full movie may be watched on Rumble; see the links below. 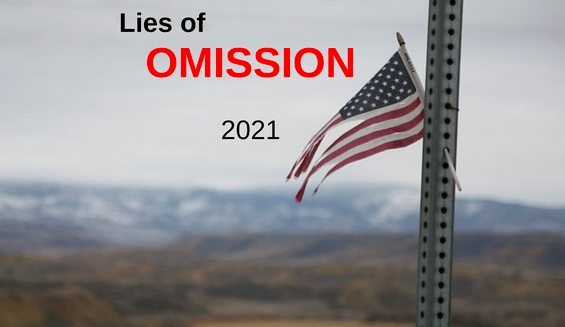 Due to a technical problem with the file stored with the distributor we had to do an update on Lies of Omission. In review, there was so much good information still relevant on the film, especially in the wake of the 2020 election and the pandemic (plandemic/scamdemic), that we decided if we were going to go through the headache, why not update the film?

A “director’s cut” so to speak. We called it Lies of Omission 2021 and added, never-before-seen footage from the original interviews. At the same time, we went to a studio and enlisted the help of their staff to increase the production quality.

All in all, though a bit shorter, Lies of Omission 2021 is a better film with a cleaner storyline and smoother, better graphics. It tells a slightly different story from the original, too. What was relevant in 2017, is no longer, and what was not readily apparent, like tyranny and communism, is.

This issues are now openly recognized by a greater share of the world’s population. Governments worldwide have made Lies of Omission 2021 more relevant and with a much wider market than it ever would have had independently. It wasn’t until the governments demonstrated every aspect of communism and tyranny that it came into its own.

Just before the last quarterly report, Lies of Omission had been seen in 12 countries on 5 different channels. An increase in countries and channels from before. We think, with your help, it can finally be used for the red pill film it was intended to be.

It’s free on Rumble, but let the ads run to help us recoup a little bit of what is still in the red on this project. If you watch this version and agree that it’s much more polished than the original and equally as valuable, push it out to friends and family, share it on social media everywhere. Link it on your sites and help us get the word out.

The more views it gets and the longer the ads run, the better it is for us, but really, this is the sort of film right now that can truly make a difference. Of course, people still have to stand up for their rights, but we feel this offers enough of a consolidation of thought that it edges them ever closer to that position.