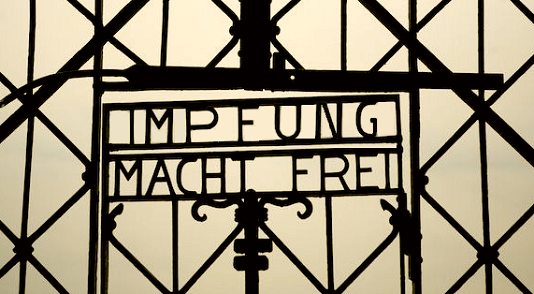 The situation in Austria is devolving to full totalitarian at an astonishing rate. First the authorities ordered a full lockdown of all “unvaccinated” citizens. Shortly afterwards they announced that mandatory vaccination (backed by threats of fines and/or imprisonment) would be imposed as of February 1, 2022.

To add insult to injury, by law Austrians are forbidden to compare the current political situation to the Nazi dictatorship, because that would “trivialize National Socialism”.

Citizens of Austria have no choice: they must experience the same thing all over again.

Below are three articles about the current situation in Austria, all translated by Hellequin GB. The first article, from the Austrian news portal Report24, concerns protests by health care workers:

Austria’s health workers against compulsory vaccination: We are laying down our tools!

Thousands of employees in the Austrian health system have already networked and jointly wrote an open letter to Health Minister [Wolfgang] Mückstein, in which they urgently warn that they will not endorse the government’s harassment against unvaccinated people. The decision for or against the Covid vaccination is of a personal nature and must remain so. The authors call for a change of course — if this does not happen, be prepared to stop work and strike collectively: “We are many and we will make our voices heard!”

Consistent resistance pays off: In Quebec, Canada, the compulsory vaccination for health workers has already been withdrawn. Worldwide there are increasing warnings from trade unions that the installation of a compulsory vaccination will lead to collapse not only in health care, but also in other essential areas such as the emergency services. The employees have the longer lever — because ultimately the security and supply of the population depend on them. Austrian health workers are sending an overly clear warning signal to politicians with their open letter. The MFG [Upper Austrian party Menschen Freiheit Grundrechte, People — Freedom — Fundamental Rights] also sent it as an attachment to its own letter to Health Minister Mückstein — you can read it here: ‘MFG clarifies in a letter to Mückstein: Compulsory vaccination is unconstitutional!’

We healthcare workers turn to you in complete disbelief in view of the latest measures you decided to take. As employees of a social area, which the health system now represents, we feel obliged to draw attention to human grievances.

We healthcare workers have been working hard and inhuman hours for some time. Many of us are already at our psychological and physical limits. It is we who have been compensating for all the shortcomings that the personnel situation has had for a long time, and who are constantly doing service beyond our extent of employment. This is a condition that was already prevalent before the Covid pandemic and has only increased in intensity as a result.

Discrimination and bullying from the highest levels

As a thank you for this, you are now promoting a split in society as a whole, which has also found its way into the health sector. A split that leads to employees who have carried out their work for years with passion and the greatest dedication are now degraded to second-class employees. You are now publicly discrediting a large part of a professional group that was recently applauded. We are deeply ashamed to watch the way discrimination and bullying find the tolerance of the highest authorities and are ultimately even fueled by them. We strictly refuse to participate in discrimination against groups of people who think differently just because it takes place under the guise of solidarity.

The way out of the split can never be to put one opinion over the other. Only mutual acceptance can represent our solution for a peaceful coexistence. Social diversity should also be your goal, because only from this emerge the values which our society should actually stand up for. The decision for or against a vaccination is and must remain the personal decision of each individual. Forcing this decision indirectly or directly lacks any sense of empathic and democratic behavior.

If vaccination is compulsory: strike!

We represent values that do not coincide with such compulsion and should have no place in a society like ours, values that you are currently trampling on. We follow our understanding of a united society in which there is neither discrimination against individual groups of people nor bullying, and we strongly defend ourselves against the mandatory vaccination imposed by them and all other measures that aim to create an indirect mandatory vaccination, be it in the health care system or elsewhere in our society.

We have found countless like-minded people in our professional area, or to put it more clearly, we have networked. So now we know: WE ARE MANY and we will make ourselves heard. All of us are also ready to resign from our duties and to go on strike in order to give our demands emphasis, because we feel compelled to put an end to these inhumane conditions which, among other things, have been taking over our workplaces for some time. Many of us will turn our backs on this profession rather than bow to your instructions. How is it possible that something like this can be provoked in an area in which chronic staff shortages have been known for years?

We stand up against the discrimination against us as employees in the health care system, but also against the patients entrusted to us and against society as a whole.

The second article from Krone discusses a proposed special tax to be paid by unvaccinated citizens, modeled on the tobacco tax:

In view of the announced compulsory corona vaccination that takes effect on February 1, different proposals for the design are on the table. The Vice President of the Lower Austrian Medical Association, Gerrit Loibl, submitted a new idea on Tuesday. He envisions a pandemic fee for unvaccinated people of around €90 to €100 per month.

According to Loibl, the amount of approximately €100 is based on the tobacco tax. According to the doctor, the average smoker pays a similar amount of money to the state every month. The medical law expert Karl Stöger from the University of Vienna, however, doubts its effectiveness: “Whoever pays the fine will perhaps also accept that,” he questioned — also a guest in the Ö1 “Mittagsjournal” — as that with this more people would get vaccinated.

Lockdown as a “late emergency break”

Stöger has no great doubts that the current lockdown is also constitutional for vaccinated people who have already received the third jab. Because that is now a — perhaps too late anyway — “emergency break”. In the current situation, every infection is one too many. And to ensure health care, it is “permissible to play it safe” and to have a lockdown for everyone.

Seven out of ten Austrians vaccinated at least once

As of Monday, 6.2 million (69.9 percent of the population) had at least the first dose of the corona vaccination — 327,000 of them in November. Booster vaccinations are also in great demand. Seven out of ten people in Austria have been vaccinated against Covid-19 once. The stragglers in Upper Austria and Carinthia in particular have caught up with the first vaccinations.

NEOS: “Slap in the face”

On Tuesday, the NEOS [political party Neue Österreich und Liberales Forum, New Austria and Liberal Forum] saw themselves prompted to criticize the government again. The reason was a letter from the Ministry of Health to households about the third jab. The information in it is out of date, and boosters are still recommended after six months. And the information is only in German; for other languages you would have to call up an Internet link. The lockdown is also “excessive”, according to Beate Meinl-Reisinger. For everyone who has stuck to everything so far, has been vaccinated and tested, it is “a slap in the face”.

The third article is from Der Wochenblick:

Comparison Prohibited in This Country

“The Nazis are coming back”: Europe shocked by the Austrian vaccination requirement

Croatian President Zoran Milanovic worries about Austria. The fact that the Corona dictatorship now provides for the compulsory vaccination of Austrians as of February reminds him of the 1930s. Internationally, Austria is increasingly becoming a negative example. “The Nazis are coming back,” headlines a Greek newspaper. A comparison that would even be illegal in Austria, in accordance with the Prohibition Act (NS trivialization, §3h). Croatia’s President describes Austria’s path as “fascist”. That’s why he called Vienna’s ambassador to see him.

Milanovic calls the Corona dictatorship in Austria a “catastrophe” according to media reports. He wants to “express our deep concerns about the fundamental freedoms in Austria” to the ambassador. The Corona restrictions envisaged by Austria’s policy are not scientifically justified and are only aimed at terrorizing people.

Not scientific: methods that are reminiscent of the 1930s

For a long time, politicians in the Balkans were instructed by Western Europeans. For example, on the subject of Bosnia-Herzegovina. Now Croatia’s President has spoken out about the human rights violations in this country, he explains: “If the Dutch and anyone else comment on Bosnia-Herzegovina every week, then I can also talk about Rotterdam.” In Rotterdam, the people protested decisively against the country’s lockdown dictatorship.

What happened in Austria reminded him of fascism. People in Croatia are smarter than the Austrians and will therefore not impose a lockdown. “In Austria today people who have not been vaccinated are forbidden from leaving the house. What is it, science or methods that are reminiscent of the 1930s?”, asks Milanovic.

Attention: Comparisons with the 1930s may be forbidden in Austria

“The Nazis are coming back”, headlines an Athens newspaper “Dimokratia”. Many people are inclined to compare the increasingly dictatorial Corona regime with National Socialism. It is unclear whether Croatia’s president is targeting his allusion to the Christian-Social Austrofascism of the 1930s or to National Socialism. The former would be legally permissible, and in fact Austria had this experience of dictatorial leadership before the later National Socialist rule. But many people are not aware of this, due to a relatively one-sided view of history as a result of the inadequate canon in the curricula of compulsory schools and the relevant ORF history program.

If Austrians were to take up the comparison of the Greek newspaper — “The Nazis are coming again” — they would at least come close to the NS-trivialization. A jury would ultimately decide whether they would even have to serve a prison term for it. Dr. Jaroslav Belsky had to experience a conviction according to §3h downplaying under the National Socialist Prohibition Act, as Wochenblick reported . He compared the Australian Corona camps with the historical concentration camps. But the Athens newspaper “Dimokratia” doesn’t care. They even put the Nazi comparison on the front page. There is international concern about our future.

All over Europe people fear that our fate will happen to them too. The solidarity is great. In London, Paris and Germany demonstrations have already taken place. Solidarity rallies took place under the motto “Freedom for Austria”.

6 thoughts on “Don’t Mention the War!”