In a time of universal vaccine mandates, non-compliance is a revolutionary act.*

The landing craft is now bumping through the raging surf, and will shortly be ejecting us onto our very own Omaha Beach.

Yes, we are in the midst of a war. There are no non-combatants.

Looking at it from one angle, everyone who has been “vaccinated” has already surrendered and been taken prisoner. The rest of us — the ones who have refused, sometimes known as “purebloods” — are now being intensively targeted in a renewed offensive by the enemy. There are very few unjabbed people left who can be easily coerced into getting the vax, so we can expect the next phase of the war to become particularly nasty. 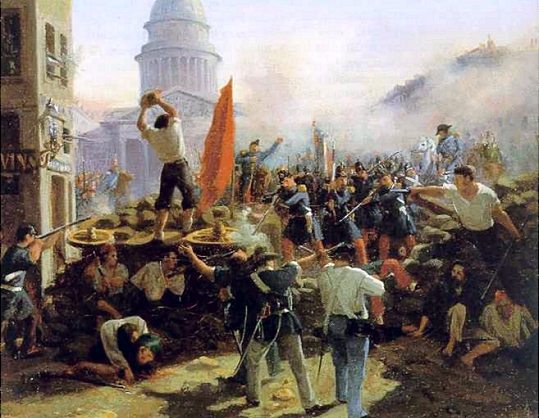 There has never been a conflict like this one, at least not in my lifetime.

As I have said repeatedly in the past, we are in the midst of an information war that has been going on for decades. Here in the glorious Year of Our Lord 2021 it’s still an information war, but over the last two years it has opened a new front in our bodies — under the skin, in the bloodstream, in the brain. This is unprecedented. Nothing like it has ever been seen before.

Eventually the Powers That Be will probably devise a way to insert the new nano-hardware and -software into us without our knowing it, but for the time being they still require our consent in order to get the needle into our arms.

They have persuaded, cajoled, bribed, threatened, and fooled just about everyone that they can. The remnant of unvaxed people are going to have to be coerced into being “dutiful”. Telling us that we’re murdering Grandma is simply not going to be enough.

No traditional method remains by which we might win this war. It’s become abundantly clear that voting is no help. Nor is writing letters to our elected representatives. The federal government has the means to ruin our lives, and it has made it abundantly clear that it won’t hesitate to do so. It has already rolled out some pretty big guns against us, and is holding some even bigger ones in reserve.

Armed citizens are able to resist to a certain extent, but the government has the means to ruin the lives of an isolated person and his family, even if they are armed. They can bust your [fundament] and cart you off in the big black armored vehicle to rot in solitary indefinitely.

Constitution? What’s a “constitution”? Never heard of it.

Being armed can work when enough armed people gather in solidarity with one another and act collectively. However, when the group becomes large enough, it gets infiltrated by federal informants and provocateurs, and gets rolled up by the government, as I have discussed in previous essays.

This can only begin to change when a large enough number of people have nothing left to lose. And the government is, of course, creating exactly those conditions with its latest heavy-handed repressive measures designed to force people to allow themselves to be injected with an experimental mRNA medical treatment. Those who resist and lose their jobs and become unemployable, who get evicted or have the bank foreclose on their homes, become people who have nothing left to lose.

This is why we lowly foot soldiers in the war need to wield the only weapon we have left, which is to say en masse: WE WILL NOT COMPLY.

It takes an ornery person to resist the kind of pressure we’re currently under. I consider myself ornery, but I’m under no illusions about how hard this may well become. I’ll see how long I can hold out.

The government is still holding its most fearsome weapons in reserve. It may well cut off Medicaid, Medicare, and Social Security for citizens who refuse the vax. We may eventually be required to show a vax pass to enter federal state, and local government buildings, or health care facilities, or pharmacies, or even grocery stores. Banks and credit card companies may shut down the accounts of people who can’t prove they’ve been “vaccinated”.

We may be reduced to scavenging for scraps in dumpsters. Except, of course, peace officers will be stationed in the vicinity of all dumpsters to check our QR codes before we are allowed near the garbage.

Yes, this is likely to get really ugly, and fairly soon. Non-compliance is going to become more and more difficult.

I’ve heard that it’s fairly easy to obtain a forged certificate of vaccination. If you’re willing to contact the right sort of seedy people, you can get the relevant card — for a price. I don’t know about digital versions, but I’m fairly sure those can also be arranged.

I won’t be taking that route.

In my old age I have decided to take Solzhenitsyn’s advice.

You can resolve to live your life with integrity. Let your credo be this: Let the lie come into the world, let it even triumph. But not through me.

I now practice what I call “radical honesty”. I won’t lie, even if it is inconvenient or harmful for me to tell the truth. So I’ll be straightforward about all this.

I will not comply.

32 thoughts on “A Reminder: We Will Not Comply”