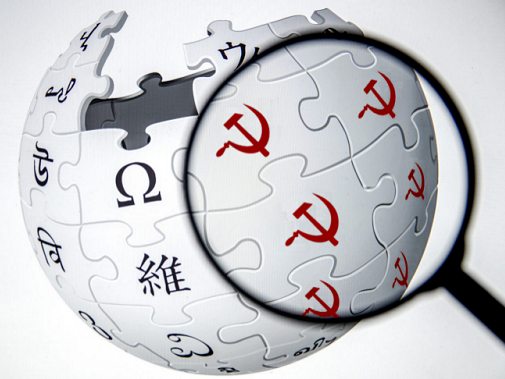 Ten or fifteen years ago Wikipedia was a biased progressive outfit, but still in general a fairly reliable source of information. Despite their ideological preferences, its editors actually did try to be fair and objective much of the time.

Not any longer. Wikipedia, like most other major online resources, has abandoned any pretense of balance. If a topic has any current political relevance (and what doesn’t these days?), Wikipedia suppresses any information that doesn’t fit the Narrative.

Wikipedia’s co-founder caused a stir recently with his remarks about the unreliability of the resource he helped develop. Below is a Swedish take on Larry Sanger and the leftward march of Wikipedia.

Founder: “Do not trust Wikipedia”

Wikipedia’s left turn has now gone so far that no one should trust what is written in the digital encyclopedia. That’s what Wikipedia founder Larry Sanger says, reports the Daily Mail.

Larry Sanger — who co-founded Wikipedia in 2001 with Jimmy Wales — comes forward with harsh criticism in an interview with the site Unherd.

Last year Sanger caused a stir when he stated in a blog post that Wikipedia’s neutrality policy is now “dead” because the content on the site is so politically rigid.

Also on Swedish Wikipedia, there is a group of left-wing activists who angle the content of articles concerning political issues to the detriment of their opponents. Since right-wingers do not have the strength to create accounts on the site and oppose this, left-wing activists can continue with their behavior.

Larry Sanger tells Unherd that he no longer trusts the encyclopedia he once created himself.

Left-wing activists have distorted English-language Wikipedia to the point that many articles can now be considered pure propaganda, he states.

When asked if you can trust the encyclopedia, he answers: “You can trust that Wikipedia will give you a reliable establishment point of view on almost everything.”

The corruption scandal surrounding Joe Biden’s son Hunter can hardly be read about at all on Wikipedia, the founder further points out.

“The little that you find is extremely biased and sounds like a letter from a defense lawyer.”

Sanger says that there are actually a lot of Republicans who use Wikipedia and would like to go in and create more balance in the articles. But they are stopped by the left-wing activist administrators.

“It is quite remarkable considering that the policy of neutrality still applies.”

Larry Sanger adds: “If only one version of the truth is allowed, it provides a huge incentive for rich and powerful people to take control of things like Wikipedia to strengthen their power. And they do.”

9 thoughts on “The Wickedness of Wikipedia”