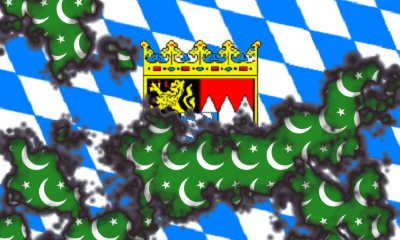 Hellequin GB has translated two vignettes from PolitikStube about Modern Multicultural Bavaria. The first one reports on a socialist politician who underwent a culture-enriching experience in Munich:

Colorful Munich: SPD [Socialist] member of the Bundestag feels “the Party Scene” up close (and personal)

The multicultural society imposed by politics is increasingly proving to be wishful thinking that is unrealistic, the effects of foreign and non-integrable cultures are so fatally noticeable that they can hardly be overlooked and the state’s complete failure is revealed. The self-sacrificing hospitality and tolerance towards certain cultural groups do not show the hoped-for effects and are more akin to throwing pearls at swine, and reactions to intolerance, power and violence are largely absent.

Something is going terribly wrong in this country. Some citizens have already woken up more or less rudely and recognize the unpleasant consequences of Multiculturalism, and that things are not going as smoothly as hoped. In the real world of Multiculturalism, sooner or later politicians will also gain experience and get a quick-witted impression of the party and event scene, like the SPD member of the Bundestag Florian Post.

The SPD member of the Bundestag Florian Post (40) criticized young party people who cause stress on Odeonsplatz and leave everything dirty. Post to Bild: “These are often young men with a migration background. But you can’t say that — but I don’t want to hide it!”

Around midnight, a young man threw a beer bottle on the pavement at the entrance to the courtyard garden. Post asked him what that was about. Reaction: The man hit him in the chest with full force, the BILD reporter learned.

More at Bild.de (they didn’t want me to see the full article)

The translator adds: “My answer to all of this is this video.”

The second article is from the town of Dingolfing (which my undermind keeps insisting on reading as “dingo-fling”, as in the coupling of dogs, which is perhaps not inappropriate):

Dingolfing: woman raped on the street

A woman was raped by a stranger on the street in Dingolfing, Bavaria. The 38-year-old was walking home on Bahnhofstrasse shortly before 10 p.m. on Monday evening when a stranger approached a gas station and wanted to kiss her, the police announced on Tuesday morning. The woman turned away. The man pulled the woman close and raped her.

She called her husband by phone, who came and chased the perpetrator for about 500 meters until he lost sight of him. The police looked for the man with a large contingent, but unsuccessfully.

The criminal police are now asking for the help of the population in this context. The perpetrator is described as follows: About 30 years old, about 1.75 meters tall. He wore dark pants and a dark t-shirt. He had dark brown, short hair, brown eyes and a slightly squat figure, his teeth and his beard were neglected. The man smelled of alcohol and spoke German with a foreign accent.

The police are now asking the population: Who was able to observe the incident on Monday shortly before 10 p.m. in Bahnhofstrasse in Dingolfing? Did anyone watch the perpetrator fleeing on foot? Who possibly knows the man or can give other technical information? Please contact the Landshut Criminal Police at 0871 / 9252-0.

5 thoughts on “The Cultural Enrichment of Bavaria”