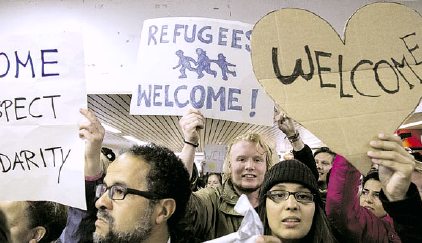 The cultural enrichment news didn’t abate just because I went on vacation for two days. Below are translations of six recent German-language migration-related news articles.

First, from PolitikStube, a culture-enriching rape in Munich, translated by Hellequin GB:

The unknown perpetrator can be described as follows: Male, 170cm-175cm [5’9”] tall, 20-30 years of age, Arab appearance, black-brown eyes, slim, black, strong, straight hair, parted on the sides, sideburns, big nose; dressed in a dark or black jacket, silver-colored zippers, dark or black jeans Has anyone witnessed anything in the Luitpoldpark during the specified period that could be related to this incident? People who can provide relevant information are asked to contact the Munich Police Headquarters, Kommissariat 15, Tel. 089 / 2910-0, or any other police station.

From unzensuriert.at, the celebration of the Persian New Year in Austria, followed by riots. Many thanks to Gary Fouse for the translation:

Insanity is becoming normal. Migrants celebrated with a campfire in the middle of Stephansplatz, directly in front of the Cathedral, and danced for hours without [Interior Minister Karl] Nehammer’s “Corona hunters” intervening.

On Sunday, hundreds of migrants celebrated the Persian spring festival on the Stephansplatz of Vienna. At the end of the event, there were riots.

Immigrants provoke with a celebration in front of St. Stephen’s Cathedral

In the night between March 20 and 21, for more than 3,000 years in several Oriental lands, the day and night “Nouruz” marking the beginning of spring has been celebrated. In Austria, up until now, there has been no public Persian New Year’s celebration. That changed, however, last Sunday. The migrants are becoming more and more self-confident and drove from the urban districts into the center of the city, so that the rest of the local population could participate in their activities.

Police do not intervene in spite of Corona violations and campfire

On the same evening, numerous videos were spread on different social media platforms, in which loud shouts, music, and scenes of violence could be viewed. The migrants danced in close embrace and often without masks, and lit a fire in the middle of Stephansplatz. The police at no time intervened. Where were the strict distance-monitors and mask enforcers, where there were thousands of reports for exactly the same offense?

Omnipresent was the flag with the emblem of the banned Kurdistan Workers Party (PKK) and a portrait of its founder, Abdullah Öczalan, sentenced to life in prison. Once more, Vienna is a venue for foreign differences.

No wonder that after a while passersby, presumably of Turkish origin, began to disturb the reported “demonstration”. According to witnesses, homophobic statements were made, as the “tweet” of an activist who was present shows below. The Revolution eats its own children.

Toward the end of the Newroz celebration, there were attacks against LGBTQ comrades. They were carrying a rainbow flag and were thus subjected to homophobic insults and were physically attacked.

We stand against heterosexist attacks and express our solidarity to those affected.

Nehammer’s police, however, were satisfied with how the evening went.

“The demonstration was basically peaceful. At the end of the gathering, there was just a short disruption. This. however, could be rapidly pacified without further incident by the intervention of police. After the end of the demonstration, a man attacked a police officer in the course of his duties and was provisionally arrested on suspicion of attempted resisting of the police.”

This article from PolitikStube concerning the notorious Sea-Watch 3 was translated by Hellequin GB:

Following an onboard inspection by the Coast Guard, which revealed a number of irregularities, the seizure of Sea-Watch 3 in the port of Augusta was ordered.

On March 21, 2021, the ship Sea-Watch 3 was subjected to the Port State Control inspection by experts from the Coast Guard in the port of Augusta. The unit is equipped with the proper safety certificate of the German flag state as a “cargo ship”, which as such is authorized to carry a number of persons not exceeding 22, according to the composition of the crew and the passengers who are necessary for the execution of its commercial activities.

The ship of the German NGO, which was not allowed to carry more than 22 people, arrived in the port of Augusta on March 3 with 385 people on board. “Unexpected factors” included the unit’s failure to pre-notify entry into the port of Augusta for maritime security purposes and the discharge of waste generated during the previous sailing period. In addition, during the docking phase in the port, the Sea-Watch 3 spilled hydraulic oil from its crane, which was used to position the ship’s gangway, on the quay and into the port waters.

“The inspection confirmed the irregularities that occurred when entering the port and pointed to further deficiencies in relation to navigation safety and fire protection on board, environmental protection and the crew, which led to the seizure of the ship.”

The inspection also related to other technical and operational areas, such as the existing rescue equipment and the organization of the ship, with particular reference to the preparation of the crew for emergencies. The inspection revealed further deficiencies in the areas of safety of shipping and fire protection on board (SOLAS), environmental protection (MARPOL) and protection of the crew (STCW), which led to the seizure of the ship. These included the presence of an uncertified lifeboat that did not meet technical requirements, fuel leaks in the bilge, non-functioning remote-controlled fuel shut-off valves, and a number of other serious deficiencies for the general safety of the ship and the people on board.

Due to the technical and operational deficiencies found, the inspectors ordered an additional review of the “safety management system” on board the ship, also in accordance with the applicable Port State Control procedures.

The ship was then placed under “administrative arrest” until the irregularities discovered during the inspection were corrected. Source: voxnews.info

From PolitikStube, translated by Hellequin GB:

Illegal migrant from Africa to Italians: “You a**holes, we are here to stay”

Dozens of buildings in Milan are now occupied, including the former slaughterhouse in Viale Molise, where over a hundred illegal immigrants live, including many criminals. Apparently there is a lack of will on the part of political leaders in Milan to clear the occupied houses, which are real time bombs.

The illegal immigrants are supported by militants from the Macau Social Center, who advocate the house occupation and count on the goodwill of the city administration to regulate their presence in their own way. While the city administration leaves these structures in this state and allows the social centers and illegal immigrants to occupy the buildings with complete freedom, the Lega is the only party that opposes the abuses and wrongdoing.

And so there was an incident in Viale Molise last Sunday. Illegal immigrants united with militants initially severely insulted a number of Lega politicians and then tried to attack them physically. An illegal immigrant African chanted, “Go home, you a**holes, we are here to stay!”

A story of culture-enriching violence against a baby, from Korbach in the German state of Hesse, translated by Hellequin GB:

The act took place on Friday afternoon in Lengefelder Strasse in Korbach (Hesse). According to information from the mother, the two strangers first tried to tear off her mouth and nose protection. While she struggled, one of them kicked the woman and slightly injured her. The other pushed the stroller over. The six-month-old baby inside fell on the ground and was badly injured. A rescue helicopter took the baby to a special clinic. How the baby is doing and whether there is any possible consequential damage is not yet known.

The perpetrators fled from the crime scene. According to the mother’s description, they are both between 15 and 20 years old and have a dark skin color. They were both dressed in baseball caps and wore dark clothes.

The police ask witnesses who can provide information about the perpetrators or the crime to report to the police in Korbach at 05631-9710 or any other police station. Source: RTL.de

The Greens are pushing for an exit from the EU-Turkey agreement. Luise Amtsberg, the refugee policy spokeswoman for the Green parliamentary group: “This unlawful asylum agreement must be ended immediately.” In addition, the Green parliamentary group called on the federal government to take in more of the migrants and refugees currently in Greece or Bosnia and to expand family reunification.

The Kobold Party feels particularly at home in the bubble of enthusiasm and does not get its neck full of “free people”, although weekly migrants from Greece are flown in and around 1,000 economic migrants from Greece enter the German social paradise on their own every month , and let’s not forget the resettlement programs and on top of that the daily illegal entry of other cultural strangers who come from Bosnia, Italy or Spain.

Although Germany really has enough problems and permanent costs due to Merkel’s solo decision, the Greens want to continue to force unlimited acceptance; they not only want to subdue the local taxpayers in abundance and burden further supply, maintenance and integration costs, but change Germany beyond recognition and cause maximum damage.

Whoever votes for the Greens has already lost touch with reality, but decides to continue Merkel’s policy and the continued destruction of this country, for example not only regarding the priceless energy, but also the flooding the country with even more foreigners and pushing back the locals.

6 thoughts on “A Potpourri of Cultural Enrichment”