Ashraf Ramelah sends this report on the response of Islamic law to COVID-19 restrictions. 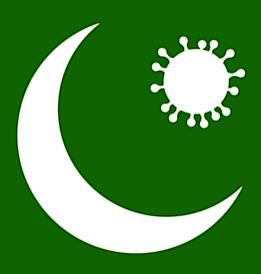 More than a year ago, the world began its battle with an invisible enemy — the novel Covid-19 virus. The fight resulted in a crisis in health care, the economy, the family and much more. While controversy over its magnitude and even its existence rages on and exploitation of the numbers continues, money is made and societies are engineered. In the Arab-Muslim part of the world, Islam further capitalizes on the authoritarian controls of the current pandemic event in place to handle the virus spread and seems to relish the expansion of top-down oppression in the Western world.

For the Egyptian Fatwa House, the Shariah legal body, affirmation of the appropriate enforcement of government mask mandates, social distancing and lockdowns comes with a further control mechanism — the edict — created by the Shariah council to be the final piece of compliance. Adding the spiritual realm to the medical environment, the following edict was issued late last year (Nov 24, 2020). It will remain in effect indefinitely:

“Wearing a mask and following the decisions of the competent authorities at the time of epidemics is a legitimate duty; In order to protect souls and ward off the negative consequences of not adhering to them.” (emphasis added).

With this edict, social controls are now converted to religion with a moral impact upon the soul. Contradicting Covid-19 orders has dire eternal consequences. Coming as a faith directive, “protect souls” is literal, and “ward off the negative consequences” means avoiding eternal damnation. An irrefutable religious law, the current edict commands obedience to secular, government mandates (legal or illegal) with a reward in heaven when followed and, more troubling, an afterlife penalty when not.

Turning the virus pandemic into a matter of the soul would seem to be the logical reason for the Islamic religious institute to issue such a statement, although the language in the continued quote reveals a more material, ideological interest.

Religious authorities are attaching the well-being of the public to arbitrary, mandated rules that control human interaction and function as the Shariah. Controlling the will of an individual in the process of seeking to curtail the spread of a virus is real power. Controls on human behavior are both relatable and significant for the Fatwa House religious authorities who are in charge of creating and issuing edicts.

The Fatwa House spokesperson continues with the edict:

“this Fatwa has the universality of Islamic Shariah [all parts of the world now have mandates, like Sharia, controlling individual rights] that includes the general public’s interests, public care, and lays down the rules for human coexistence and human interaction controls that achieve a livelihood and provide a good life, through which people settle down, societies organize, and peace and security are achieved.” (emphasis and brackets added).

An edict is issued when an innocent question is asked of the religious scholars by a devotee, and the answer is always telling of their leanings against personal freedom. In this case, the Egyptian Fatwa House decided that government rulings have the right to compel the ruled to wear masks and obey mandates; in effect, the scholars merged the concept of Sharia law controls with secular, state mandates.

Fatwa edicts always answer a pressing question submitted by a person for clarification. This time the inquiry was about the state requiring citizens to wear masks on public transportation, government and private facilities, markets, shops, banks, and more during this epidemic. In essence, the edict instructs that “rules for human coexistence and human interaction controls” because of Covid-19 should be pervasive and welcomed. These controls are both immutable and inflexible because, according to the current edict, both the religious and secular are intertwined.

Our legitimate interests achieve their established objectives [to control people physically and spiritually], and the Shariah legislation includes them [Covid-19 protocols] with integration and balance when conflict exists.”

Furthermore, the Shariah takes care of the individual and group interests; however, when granted personal freedom, such commitment [to medical protocols and Sharia laws] is a way to avoid any conflict with community interests and the safety of those around.

The nature of the Fatwa House edict pulls back the curtain on what Shariah laws are really about. Those admiring the religion of Islam must take into account what this edict demonstrates in a larger sense. The highest religious authority of the Islamic faith delights in total control over believers and outsiders. The Fatwa House has taken this opportunity to approve and appreciate methods similar to the Sharia that are now being imposed on secular and faith populations around the world.

How are Western women viewed by Islam under Covid-19 mandates? Face coverings are a staple for women under Sharia law, especially where fundamentalism reigns and Islam is ideally realized. As the “lesser sex”, it is less important to be seen and heard than to revere God as interpreted by male, religious scholars. Linking Covid-19 protocols to Sharia mandates makes it “rightful” to impose face coverings upon Western women.

Furthermore, for Christians, the Great Commission requires visage and voice clarity. Expression of the Word is imperative and has the utmost relevance to believers according to New Testament scriptures. Over the past year, the defacing of Christian women and men has been an ungodly offense because it impedes the Word of God.

As masks, social distancing and lockdowns are utilized to resist viral infection, these mandates also aid in resisting the giving and receiving of the Good News and obedience to the command to assemble together. If not effective in the former sense, as independent studies tend to demonstrate, mandates have done harm in the latter regard as more than a symbol against the Creator.

One thought on “Lockdowns Are Halal”