Turkish President Recep Tayyip “Papa Goat” Erdogan has filed a lawsuit in a Turkish court against Geert Wilders, the leader of the Party for Freedom (Partij voor de Vrijheid, PVV) in the Netherlands. Mr. Erdogan is upset over “insults” by Mr. Wilders as expressed on social media. The Turkish president considers the issue to be under the jurisdiction of Turkish courts because the alleged insults were directed at the office of the presidency.

The incident reminds me of the initiative by Jordan back in 2009, when the Hashemite Kingdom issued a warrant for Mr. Wilders’ arrest and extradition to Jordan to be tried for insulting Islam with his movie Fitna.

Below are excerpts from a Reuters article about the Turkish lawsuit:

Wilders is one of Europe’s most prominent far-rightists and has been a key figure in shaping the immigration debate in the Netherlands over the past decade, although he has never been in government.

On Saturday Wilders posted a cartoon picture of Erdogan and captioned it “terrorist”. On Monday he posted an image of a sinking ship with a Turkish flag on it. “Bye bye @RTErdogan. Kick Turkey out of NATO,” he said under the image.

Erdogan’s lawyers filed a lawsuit with prosecutors in Ankara on Tuesday, saying Turkish courts had jurisdiction on the matter because the insults were directed at Turkey’s president, Anadolu reported, citing the document filed by the lawyers.

“Even though the crime was committed directly against the person in the presidential seat, the value that is being violated is the state’s political government structure,” the lawyers said, according to Anadolu. 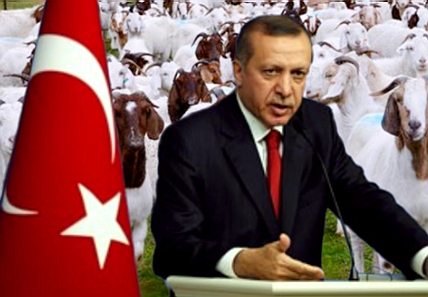 They said the comments by Wilders could not be viewed as freedom expression and that Wilders had targeted Erdogan’s “honour, dignity, character and reputation”.

“I have a message for President Erdogan and the message is very simple. In the Netherlands, we consider freedom of speech one of our most cherished rights and that includes cartoons, including of politicians.”

Ankara has long been critical of the views and policies put forth by Wilders, leader of the Freedom Party. Foreign Minister Mevlut Cavusoglu on Sunday called him a “loser racist” trying to gain support with animosity towards Islam and foreigners.

“It is time for Europe to stop its spoiled, fascist-minded politicians,” Cavusoglu said on Twitter.