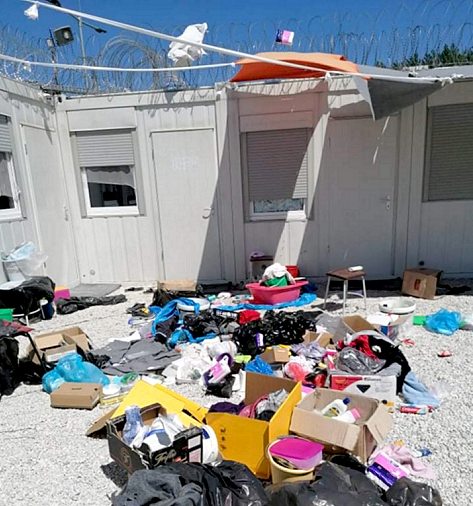 During the Great Migration Crisis of 2015, Hungary built a fence along its southern border to keep the invaders out. Migrants who wanted asylum were required to enter through the official border crossings and apply for asylum before they could proceed any further. The government built facilities in the “transit zones” to house the migrants while they waited for a response to their asylum applications, a place where they could stay on a completely voluntary basis. They were free to return by the same route they came whenever they wanted.

The European Union recently ruled that the migrant housing in these transit zones constituted “illegal detention”. As reported in the news feed a few days ago, Hungary responded by closing the transit zones, and from now on will require migrants to file their asylum applications at a Hungarian consulate outside the country.

In the wake of the clearing of the transit zone housing, it became evident that the culture-enrichers had fouled the nest that the Hungarian government had supplied for them. Their behavior suggests a new meaning for the word “refusenik”.

Many thanks to CrossWare for translating this brief article from the Pestisracok.hu conservative portal:

Following a recent political ruling by the European Court of Justice, the Hungarian government ordered the immediate evacuation of transit zones at the southern border. In addition to the stricter immigration administration rules that came into force, those already in the transit zone were transported to refugee camps in the country, but after their departure, dramatic footage was captured of the destruction by “war refugees” in the Röszke transit zone. In connection with the startling pictures, it is worth mentioning that the scattered, shattered objects had arrived there both through the Hungarian state and from various aid organizations.

[Translator’s note: More pictures can be found in the article (see link)]

3 thoughts on “Fleeing Syrian Brain Surgeons on the Rampage”