Our Hungarian correspondent CrossWare sends this compilation of material about the European Union’s attempts to force Hungary to abandon its sovereignty and embrace mass immigration. 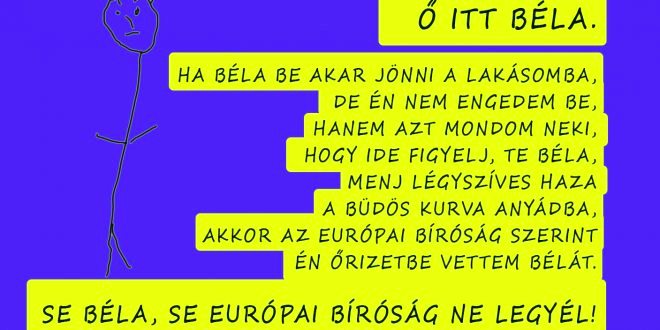 Béla is a Hungarian given name, made famous in the USA by Béla Lugosi, the actor who portrayed Dracula. (As a matter of interest, Béla Lugosi was born in Hungary, but his hometown is now part of Romania.)

A direct translation of the meme shown at the top of this post:

If Béla wants to enter my apartment, but I do not want to let him in, and I say to him: “Hey, you, Béla, why don’t you go home to your stinkin’ whore of a mother?!”, then the European Court says I arrested Béla.

Please do not be a “Béla” or a “European Court”!

A long-standing grudge is held by EU bureaucrats against the ingenious solution implemented by the Hungarian government, which erected a border fence and built “transit zones” along the southern border of Hungary.

The transit zone is built inside Hungarian territory, just like the fence, which was built three meters into Hungarian territory to avoid international incidents. The transit zones consist of some buildings along the fence, where the migrants may request asylum. While their papers are being processed they can stay, they are fed, and if they become bored, they can return to Serbia without a second thought.

Of course, most asylum applications are rejected, mostly because Hungary is not the first European country the migrants have entered. These “people” (we just lovingly call them: “invading horde”) waltzed through multiple countries before arriving at our borders. Obviously this solution hurts the EU leadership, because they would like nothing more than to replace the original population as soon as possible.

Now the European Court has come out with a verdict stating exactly what the meme phrased rather elegantly. The transit zone, which the nomadic invaders may enter and leave at will, is a “terrible prison”, where there is no escape… Run, people, run! And somebody please think of the children (Helen Lovejoy, The Simpsons):

Big changes, of course, never happen overnight. Nor did the age of discovery and European exodus begin when Columbus stumbled upon the American continent in 1492; it was preceded by the establishment of African ports, the boom in Indian trade bypassing the Middle East conquered by the Turks, and thus the development of European shipping in general. Yet the descendants of Europe may be tied to today’s descendants when they analyze how they managed to create a frustrated, poor madman from the most developed and happiest continent.

The European Court of Justice has ruled according to the logic of the opening image. Reality doesn’t matter, just ideology. Decades of active undermining by the crazed social engineers, the occupation of universities, culture, and the courts have matured into this madness. Just as it doesn’t matter who has what between her legs, even if she has a [manly appendage], it doesn’t matter to members of the European Court of Justice that a fence cannot be a prison for someone who is outside it.

According to the European Court of Justice, if we do not allow someone into the country, but he crouches in the corner and does not go anywhere, it is considered detention.

Europe will be killed by the dictatorship of an open society when nothing can be seen and described as what it is. The reality of reckoning has disappeared in Europe, which was the first place to proclaim the primacy of rational reason over superstitious beliefs. We went back to the Middle Ages, but without the dignity and education of the church, merely obeying some mentally ill people who lied so as to be liberal.

Extraordinary: The government does not accept the ruling of the European Court of Justice about the transit zone

The government will not accept the ruling of the European Union’s court based in Luxembourg on transit zones, and will investigate whether their operation is in conflict with the Hungarian constitution, the prime minister’s chief internal security adviser (György Bakondi) said on M1.

The rest of the article is not that important, just hashing out why the government thinks the border fence is a good idea — we know that already.