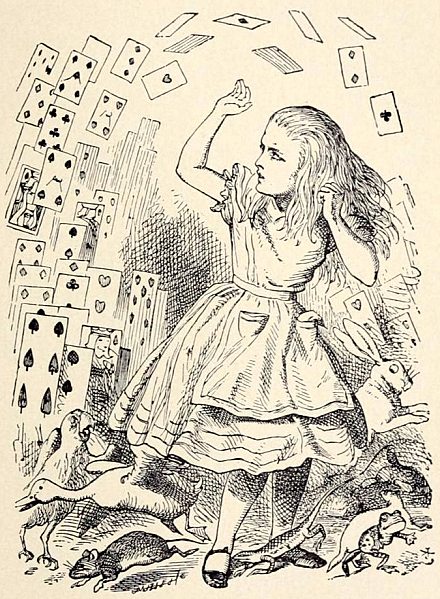 Off with her head!’ the Queen shouted at the top of her voice. Nobody moved.

‘Who cares for you?’ said Alice, (she had grown to her full size by this time.) ‘You’re nothing but a pack of cards!’

In case you’ve been traversing the Antarctic, and have been without an Internet connection for the last few days, Donald Trump has caused a new uproar in the media and among the chatterati. His latest offense was to tell the “Squad” (four communist congressbabes: Alexandria Ocasio-Cortez, Ilhan Omar, Rashida Tlaib and Ayanna Pressley) that if they hate America so much, they should just get on back to where they came from.

Progressive apoplexy ensued. Even though it was obvious that Mr. Trump had directed his remarks specifically towards the non-native Ilhan Omar, the media went into high dudgeon on behalf of all four “women of color” — as if Occasional Cortex were any more colored than I am.

Further details would be tedious and are not worth listing here. If you’re interested, and can stomach these Progressive outlets, here’s the media’s take on Donald Trump’s latest demonstration of “racism”:

Among the non-Woke, opinion is divided on the effectiveness of the president’s latest sally against the socialist Multicults.

In favor of Mr. Trump: He is forcing Nancy Pelosi to give full support to the four congressgendernonbinaries she had just tried to distance herself from. Last week they were anathema to the Speaker of the House; this week they are victims of racist abuse. The president has driven Ms. Pelosi into a corner where she has no choice but to embrace the four people she knows are destroying the Democrats’ chances of holding onto the House next year.

Against Mr. Trump: The president has played into the hands of those who label him a “racist”. He will alienate those undecided voters who might otherwise be leaning towards the Republicans.

Regardless of whether he is pursuing a winning or losing strategy — only time will tell — Mr. Trump is obviously following my advice and refusing to play the game. The huge furor over his first tweets about the Squad did not deter him in the slightest — the day after his initial tweets he doubled down on his theme, elaborating on the Squad’s hatred of America. He’s not at all concerned about being called a “racist”.

In other words, he declined to play the game — the currently accepted, universal Progressive game of forcing non-Progressives to backpedal and try to prove to the world that they do not deserve to be called “racists”.

While I was reading all the bumf on this — and some of it was really hard to slog through — I started thinking about the Race Card, which is what the Progressives love to play against their opponents. In recent weeks they’ve even been playing it against one another, with the insufficiently Woke being called “racist” by the completely and thoroughly Woke. Occasional Cortex even slapped down the card against Nancy Pelosi, who had had the temerity to criticize her and her communist sistren. If Nancy isn’t getting with the program, she must be a racist!

The Race Card is their favorite, but the Progressives have various others in their deck. “Islamophobe”, “Xenophobe”, “Misogynist”, “Homophobe”, and more recently, “Transphobe”. I figure more cards are in the works — “Incestophobe”, “Necrophilophobe”, and “Pedophilophobe” are probably being printed up right now, or will be shortly.

And there’s another card that is widely used these days, but doesn’t seem to have a specific name yet. I like to call it the “Puir Wee Bairn Card”. Ever since the summer of 2015, when the pitiful corpse of little Ayan was carefully arranged on a beach in Anatolia, the power of the Puir Wee Bairn Card has been displayed on both sides of the Atlantic. When there’s a throng of 10,000 migrants walking across the Balkans, and it contains just a single family with children, that is the group that will be featured in photos and videos on all the major media outlets. Och, the puir wee bairns!

It’s the same on the Mexican border. Just think of the puir wee niñas being ripped from their mothers’ arms by those heartless Republicans! It doesn’t matter that the whole family-with-kids scene at the border is a scam, with people either exploiting their own children or renting someone else’s so as to get into the USA, where they can then grab all the goodies. It’s of no moment that 99.5% of the separation stories are utterly bogus. The Puir Wee Bairn Card trumps everything else. We must open the border to all comers, or else all those big-eyed children will suffer horribly.

It seems intuitively obvious that there is a direct correlation between being childless and getting all dewy-eyed over the Puir Wee Bairns. Adults who have few or no children are more susceptible to having their heartstrings tugged by the thought of suffering (but distant) little children than are those who have raised a big brood. I don’t have any data to back up my theory, but I’ll bet it’s true. Hillary Clinton has used “the children” to great effect throughout her political career, and her target audience probably averaged 0.4 children per woman. Or is there a singular for “wymyn”?

Anyway… Donald Trump is obviously refusing to play the game that includes all these cards. Slap one of them down on the table, and he doesn’t even look at it — he keeps on going with his own game, played by his own rules, and not the Left’s. His tactics may or may not work in the end, but they sure are appealing.

52 thoughts on “You’re Nothing But a Pack of Cards!”