The video and article below concern an incident of cultural enrichment in the northern Swiss canton of Aargau that was so egregious the Swiss press had to take note. A Syrian seventh-grader hit his female teacher multiple times, striking her so hard that he broke her jaw. His action was in respobnse to her impertinence in asking him to empty his pockets of knives and other implements of destruction.

To put the attack into an Islamic cultural context: It was unbearable to the boy that a mere female should treat him with such disrespect. If a woman had been so disrespectful to him in his home country, there would have been two possible outcomes, depending on the circumstances:

Since the teacher was unaccompanied by any male relative, she was without any protection, lacked honor, and could be disciplined with impunity. Such was the deeply-embedded sharia code that the boy was instinctively following.

The incident occurred in the town of Möriken-Wildegg. Ava Lon, who translated the video for subtitles, sends this interesting information about the name:

Please note that the town coat of arms includes a little African, because the name Möriken was thought to be derived from a diminutive of “Moor”, and thus means “Little Moors”. 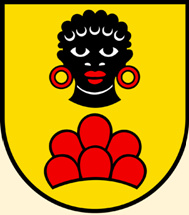 I dug into the history of the name, and it seems to have originally been a form of the clan name “Mor” — i.e. “The village of Mor”. As the name evolved, the coincidental resemblance to “Little Moor” must have suggested the design for the coat of arms.

As for “Wildegg”, that comes from a phrase meaning “steep mountainside”. Nevertheless, those things in the lower part of the coat of arms look like red eggs to me. Maybe the word “egg” means “egg” in a Swiss German dialect (the German for “egg” is “Ei”, if I’m not mistaken).

Möriken-Wildegg: A 14-year-old Syrian hit his female teacher five to six times — he had received negative attention in the past

The youth from Möriken-Wildegg talked a lot about the Quran, and during recess instructed girls to dress more modestly.

The case caused shock: last week the Argauer Zeitung published the news, that in Möriken-Wildegg a student from the Chestenberg school broke the jaw of a teacher by punching her with his fist.

He did this when she wanted to find out if the Syrian secondary-school student was carrying a knife — as he had already done in the past.

This time the case was taken up by the Weltwoche journalist Alex Baur. According to his research it is about a 14-year-old “M”.

He allegedly comes from a Syrian family with numerous children, who came to Switzerland exactly five years previously and allegedly lives on welfare. His German is good, and he is described as “quite intelligent, self-confident and quick-witted.”

Still, for a while “M.” had often allegedly been talking about the Quran. He also requested — “in Allah’s name” — that the girls from the area dress and behave more modestly. In this context he allegedly played with a knife on the Hellmatt School recess court. This, according to Weltwoche, resulted in his having to empty his pockets every time before being allowed to enter the classroom.

Obviously, during such a search the attack against the teacher took place. She is said not to have touched the student, but instead only told him to show her the contents of his pockets. At that the teen has attacked her, and, according to eyewitnesses, on whose testimonies the Weltwoche author bases his story, he hit the 62-year-old female teacher five to six times with a fist and the edge of his hand.

Additionally, while she was fleeing he allegedly kicked her. The mother of two adult sons was about to retire. As Weltwoche found out from her environment, she is still in shock.

The Syrian was arrested shortly after the act. The youth has been released after having to spend two days in custody. The juvenile prosecutor is investigating.

André Schärer, the school district deputy from the Chestenberg school district, has neither confirmed nor contradicted the question from the Aargauer Zeitung about the research, based on anonymous sources, by Weltwoche. He could only confirm that the Syrian stood out from the beginning. So Schärer also heard that ”M.” had allegedly told the girls on the recess court to dress more modestly:

“There are clearly certain signs that he doesn’t agree with the way we are cultivating our culture.”

In the media and in the village there’s a rumor that the wounded teacher had to spend a long time in the hospital. Schärer insists that this is not the case. “The Monday after the incident she was off. On Tuesday the incident was discussed in the class concerned with the school social worker. At that point the teacher was already present [in the school] for a couple of hours. From Wednesday to Friday she took care of the class.” Schärer did not want to be misunderstood, however: “I don’t want to downplay the incident; it is serious and should be most severely condemned.”

School district deputy: ”We cannot give any more information.”

It took a week before the incident was made public. The school district deputy insists, however, that nobody wanted to sweep the case under the rug: ”It happened on Friday June 28th. One day before the Youth Festival. Already that same evening we, with the [female] president of the school district, decided on a communication strategy; we decided to actively inform male and female students and the parents as much as possible.”

Of course, it was discussed during the Youth Festival, and the district had to listen to complaints that they wanted to hide something. “This isn’t correct. We wrote a letter to the parents during the week following the Youth Festival. Our hands are tied, because of the investigation by the juvenile prosecutor. Even if we wanted to give out more information, we are not allowed to.”