Brexit continues to be postponed, to the extent that the British are preparing for next month’s elections to the European Parliament; it’s business as usual. Below is the latest on the topic from Seneca III. 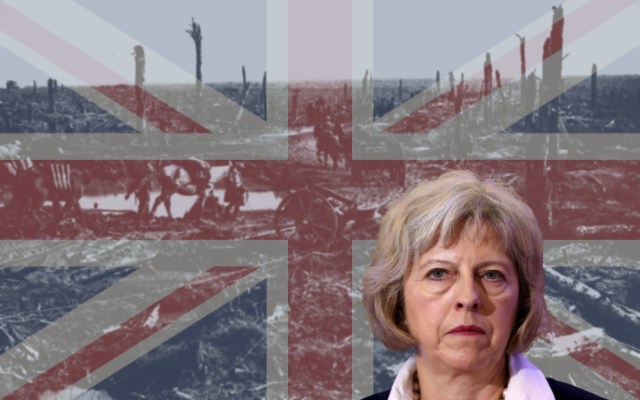 And the Debacle Continues

Yesterday in the Newport, Wales by-election, the electorate chose yet again a candidate from the Labour Party, albeit by a narrow margin and on a very low turnout.

Meanwhile, Theresa May was busy writing a begging letter to Brussels asking for another extension beyond the 12th of this month in order to complete her mission of selling us lock, stock and barrel into the arms of a crooked, malignant, globalist ideology.

Elsewhere many British commenters on the Interweb and in some sections of the electronic MSM are crying out for minor political parties such as UKIP and new ones such as what Farage appears to be building to stand at the next general election and hopefully replace the present incumbents. Looking at the above results, I have good reason to expect that will not happen, and even if it does, either to a lesser or greater extent, it is not the answer; a political solution in very much the same mould as the existing one but with different players is not going to work any better. The alien ideological pollution of our electorate has gone beyond the point of no return. A whole new paradigm must be constructed and implemented.

Essentially, the voting demographic must be changed because a democratic system whereby a universal franchise is automatically awarded to all and sundry irrespective of ability, intent or right to exercise that prerogative in the best interests of the nation state will always fail in the long run.

That failure is what we see before us this day, and I can see no reason to repeat it by just carrying on as before. We must change the system before we can change the players.

As Gerard Batten put it to the EU parliament:

You have done what Philip of Spain, what Napoleon, what Kaiser Wilhelm and Hitler couldn’t do. You have brought Britain to its knees without firing a single shot. But you could not have done any of these things without the connivance of the traitors, quislings and collaborators in the British parliament and the British establishment.

[And he should have added, “Neither you nor they will be forgiven.”]

You never change things by fighting the existing reality. To change something, build a new model that makes the existing model obsolete.

Precisely, Mr. Fuller, and there are precedents:

Boudicca and the Iceni? The Great Revolt of 1381? The English Civil War? Bloody Mary? The Peterloo Massacre? Not all were immediately successful but in the longer term all, including Boudicca and the Iceni, who were exterminated to the last resisting man, woman and child, later led to a change in the political landscape of the time — although not necessarily for the better, depending on one’s position in the scheme of things and personal perspective.

Unfortunately, in such circumstances many innocents paid and will continue to pay the same ultimate price as the revolutionaries and their oppressors — something our political classes and their supporters either do not know, do not understand or simply do not care about as they cast into the wilderness what has been a most stable form of governance for coming up two hundred years.

The Government’s policy has always been and remains to leave the European Union in an orderly way, and without undue delay. The House of Commons has not thus far approved the deal that would enable this, nor — despite considerable efforts by both Members of Parliament and by the Government — has it yet found a majority in favour of any other proposal. The House has, however, continued to express its opposition to leaving the European Union without a deal. The Government agrees that leaving with a deal is the best outcome.

This impasse cannot be allowed to continue. In the UK it is creating uncertainty and doing damage to faith in politics, while the European Union has a legitimate desire to move on to decisions about its own future. That is why the Government has decided to take further action to seek a consensus across the House of Commons on the right way forward.

I therefore met the Leader of the Opposition earlier this week to discuss whether we might be able to agree a proposal that can be put before the House of Commons which allows the United Kingdom to leave the European Union with a deal. We agreed follow-up discussions that are now taking place. I have also extended an open invitation to Members of Parliament more broadly to work with me to achieve a consensus that respects the result of the 2016 referendum. I am clear that all of these discussions need to be based on acceptance of the Withdrawal Agreement without reopening it, as the United Kingdom agreed with the European Council at our last meeting, and should focus on the framework for the future relationship between the United Kingdom and the European Union. If a consensus is going to be found, compromise will be needed on all sides, in the national interest.

If the talks do not lead to a single unified approach soon, the Government would instead look to establish a consensus on a small number of clear options on the future relationship that could be put to the House in a series of votes to determine which course to pursue. The Government stands ready to abide by the decision of the House, if the Opposition will commit to doing the same.

These steps demonstrate that the Government is determined to bring this process to a resolution quickly. The Government acknowledges, however, that after approval to the Withdrawal Agreement is achieved, the process of enacting those commitments in domestic law and therefore ratifying the Agreement in the United Kingdom will take time. Therefore having reluctantly sought an extension to the Article 50 period last month, the Government must now do so again.

The process I have laid out in paragraphs 4 and 5 is designed to bring the House of Commons to rapid approval of the Withdrawal Agreement and a shared vision for the future relationship, and to allow the Government to introduce the Withdrawal Agreement Bill and so ratify the Agreement. An important part of that process will be the Government agreeing with the Opposition a programme for the Bill. The Government’s objective is to ensure that this programme means the Bill can complete its passage such that the Agreement can be brought into force and the United Kingdom withdraw from the European Union in time to cancel the European Parliament elections. I am writing therefore to inform the European Council that the United Kingdom is seeking a further extension to the period provided under Article 50(3) of the Treaty on European Union, including as applied by Article 106a of the Euratom Treaty. The United Kingdom proposes that this period should end on 30 June 2019. If the parties are able to ratify before this date, the Government proposes that the period should be terminated early. The Government will want to agree a timetable for ratification that allows the United Kingdom to withdraw from the European Union before 23 May 2019 and therefore cancel the European Parliament elections, but will continue to make responsible preparations to hold the elections should this not prove possible.

It is frustrating that we have not yet brought this process to a successful and orderly conclusion. The United Kingdom Government remains strongly committed to doing so, and will continue to act as a constructive and responsible Member State of the European Union in accordance with the duty of sincere cooperation throughout this unique period. I would be grateful for the opportunity to update our colleagues on the position at our meeting on Wednesday.

Yours sincerely,
Theresa May

8 thoughts on “And the Debacle Continues”