Our English correspondent Seneca III sends the latest on the collective act of political masochism known as Brexit. I was unable to post it last night when it came in, but as far as I can determine from perusing today’s headlines, the situation hasn’t changed substantially since then. 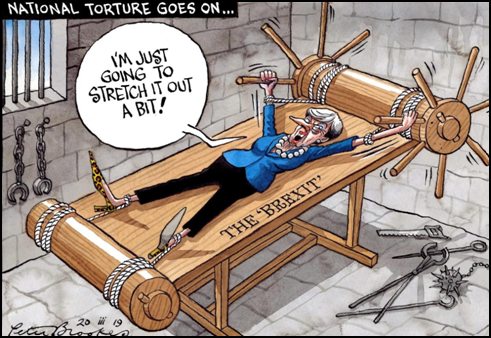 This morning the news broke that Prime Minister Theresa Mary May is going to ask the EU for a three-month extension to our Article 50 established departure date, 29th March. The requested length of this extension is significant, inasmuch as it would keep us in the EU but still preclude us from participating in the EU parliamentary elections on the 26th of May, whereas a longer extension would mean we could, and such an extension is therefore unlikely to be granted by the EU at this stage.

However, as far as I can determine, there is nothing to prevent her asking for another, longer extension when the three-month one draws to a close, as by then it would be too late for us to participate in the EU elections and consequently we would have no say in its deliberations.

Treachery has become thy name, woman, and that name will echo down the corridors of time, whatever deserved fate you meet. Your duplicity knows no bounds, nor should your comeuppance.

Furthermore, my anger at the way this treacherous debacle is grinding on is reaching the boiling point. May and her cronies have filled a metaphorical pressure cooker, screwed down the lid and the safety valve and lit a fire beneath. Both the laws of physics and of human affairs suggest that there will be an explosion if the pressure within is not released immediately.

For reasons beyond rational comprehension, parliamentarians seem not to understand — or simply don’t care — that they are playing Russian roulette with the lives of 60+ million people. Those people are not pawns in some game of imaginary chess; they are real and increasingly angry — unless, of course, it’s just the occasional foolish renegade like me.

Yet, whilst I do not fully subscribe to precise replication as defined by the axiom ‘History repeats itself’, down the centuries there have been many similar parallels to today’s situation. Thus, I do wonder if the fact that 2019 — August 18th, to be precise — the bi-centenary of the Peterloo Massacre*, is of any significance. Because the root cause then, Suffrage, was not dissimilar to what is about us today… a powerful, closed and established political class determined to protect its sinecure at whatever cost, including the slaughter of unarmed civilians.

If we do begin massive protest this year, the one thing we must not do this time is to walk naked and unarmed onto the battleground. If we crack off, we must expect to be met with draconian force and be prepared to respond in kind.

We can learn from history, even if it doesn’t repeat itself exactly. The only question remaining is, ‘Will we?’

N.B. It has just surfaced that the peaceful ‘March to London’ organised by Nigel Farage is being restricted to fifty persons at any given time, thus diminishing its significance in the public eye. Plod do keep insisting on marking their card with monotonous regularity; it may be that their future will become as interesting as ours.