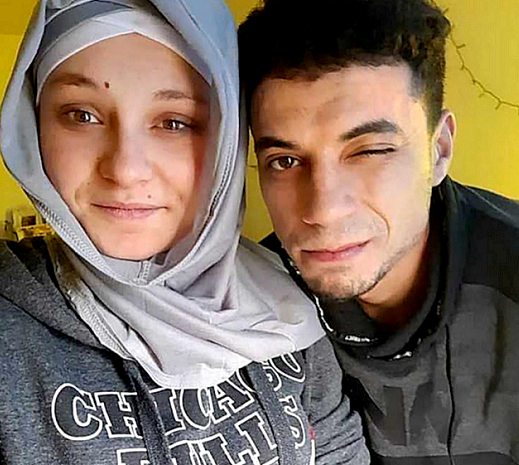 Cynthia loved Ahmed. She was devoted to him. She wore hijab for his sake.

Unfortunately for Ahmed, his application for asylum in Germany was turned down. When he was finally arrested and about to be deported, he asked Cynthia to come with him to Tunisia. When she refused, things turned ugly. Cynthia was later found stabbed to death.

The following video reports on what happened at the church where Cynthia’s memorial service was to be held. Many thanks to Nash Montana for the translation, and to Vlad Tepes for the subtitling:

Below is an article about Cynthia from Bild (subscription required), also translated by Nash:

Cynthia wore hijab for her killer

[Photo #1 (at the top of this post): Without makeup, but with hijab: Cynthia looks into the camera with a slightly uncomfortable look. Ahmed apparently wanted to take his girlfriend back to Tunisia.]

Worms — Her death leaves you speechless! More than 500 people participated at the funeral march on the weekend with flowers and candles for the 21-year-old Cynthia R. She had been murdered by her boyfriend Ahmed T. (22) last week.

[Photo #2 (not shown): In front of her house, pastor George Ambadan lights a candle]

[Photo #3 (not shown): A selfie from happier times: Cynthia and Ahmed only got together at the end of last year]

Friends of the family talk about the relationship between Ahmed and Cynthia. “She wore hijab for Ahmed,” says a friend of Cynthia’s father to BILD, “and she learned to speak Arabic out of love for him.”

When the two began their relationship four months ago, Ahmed T. already knew that he was going to be deported. His asylum seeker application had been denied long ago.

So he tried to convince his new girlfriend to go with him to Tunisia. But friends of the family say that went too far for Cynthia R.

[Photo #4 (not shown): Ahmed under arrest: After his arrest, the killer was brought to the prison with shackles on hands and feet. He’s been behind bars for five days now.]

Could this be the reason he murdered her? Because she didn’t want to move to Tunisia with him? Last Monday an arrest warrant was issued for her boyfriend in order that he might finally be deported. Less than 48 hours later the situation between the two escalated.

Ahmed had registered himself under three different identities and had therefore cashed in three times the spending money in Germany. He stabbed the young woman by ramming a kitchen knife through her neck, her lungs, her hands and her back more than ten times.

[Photo #5 (not shown): Cynthia with pit bull: Cynthia loved animals; she had two dogs. Here she poses with one of the puppies.]

“She meant so much to me and I miss her a lot,” says her cousin Patrick Schopp (34, scaffold builder) to BILD. “I will keep her in my memory as this fun-loving person who never had anything bad to say about anyone and who was very helpful with everyone.”

6 thoughts on “Allahu Akhbar at the Liebfrauenkirche”