When I post news reports about European mujahideen who travel to the Middle East to join the jihad, I often refer to their nationality in scare quotes, because they are as much Germans or Dutchmen as I am a Hottentot. However, in this case no quote marks are warranted — the late mujahid Thijs Belmonte really was Dutch. He converted to Islam in 2005 and pursued his religious vocation by beheading infidels in Syria.

Many thanks to FouseSquawk for translation this article from De Telegraaf:

Damascus: Red-haired jihad terrorist is killed on the Iraq-Syria battlefield

The traveler was once seen in a public beheading video

The Rotterdammer Belmonte was one of around 300 Dutch travelers and a prominent ISIS fighter according to the NRC, which writes that the report of his death has been confirmed. 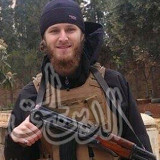 Belmonte is one of the more well-known travelers to Syria. He journeyed to the battlefield in 2013 at the age of 24. The Rotterdamer converted to Islam in 2005. Belmonte obtained military training and was impressive in battle. He advised the Islamic State on who from the Netherlands could be trusted and who could not. On Facebook, Thijs burned his Dutch passport. Return home? Never!

The Public Ministry summoned Belmonte to stand trial for participating in a terrorist organization. He was on the national terrorist list.

Thijs’ family, according to the NRC, declines to comment. Earlier Thijs’ father confirmed that his son was in Syria.

Thijs Belmonte made the news in 2013 when a photo of him appeared. In it, he posed in chair with camouflage clothing and an AK-47 machine gun. The Rotterdammer was believed to be living in Aleppo. Belmonte spoke fluent Arabic and could partially recite the Koran.

His heavily pregnant wife later joined him in Syria. In the war zone, he answered to the name of Anwar.