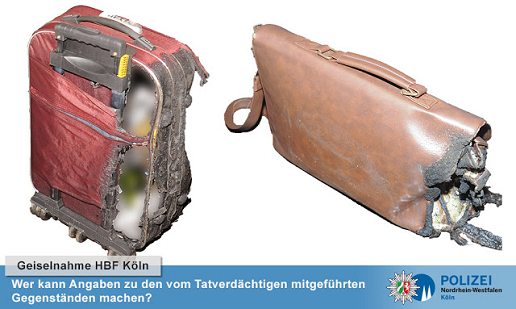 As of last night, the German authorities were still maintaining that yesterday’s firebomb attack and hostage-taking in Cologne had “no connection to terrorism.” Today the story looks a little different.

(Also, just before I went to bed last night, I read that police had shot the terrorist and taken him into custody, apparently still alive.)

The suitcases brought by the terrorist to the McDonald’s at the Cologne train station were filled with fire accelerants. Steel balls were included.

We’re not getting this news in Germany; this report is from Austria.

If the identified culprit, a 55-year-old Syrian, had exploded his total inventory of gasoline and gas cartridges, with steel balls attached, there would have been a much more violent crime on Monday with “much greater damage” created, said Cologne Chief of Criminal Investigations Klaus-Stephan Becker on Tuesday.