The October chill has set in, reminding us that it’s almost time for Saint Nick — no, wait, I can’t say that: Muslims and atheists are offended by saints.

OK, it’s almost time for Kris Kringle to slither down they chimney and deliver the treats to all those good little girls and boys. H. Numan sends his annual essay on the ancient Dutch origins of the tradition, and the efforts of the PC brigade to scupper it.

But just wait till the Powers That Be find out that “Kris Kringle” is derived from the German dialect word Christkindl, or “Christ Child”. Then I’ll be in deep trouble for allowing an implicit instance of the C-word to appear in a public space. They’ll flay me alive! 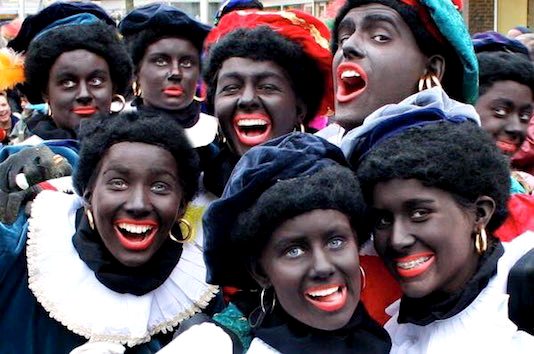 It’s that time of the year.

The happy season is about to begin. It’s almost a tradition by now: I have to explain that Black Pete has nothing to do with racism. Year after year after year. Left-wing activists never give up. Neither do I. So here’s the background for those of you who are not familiar with this very sad affair.

Let’s start with Santa. The original Dutch Santa, that is. It goes back to pre-medieval times, even. But we start with Saint Nicholas, who was bishop of Myra (in Turkey) in 343 AD. His festival day is 5 December, and widely celebrated in The Netherlands and Belgium. Your Santa is a mixture of German, Dutch and Anglo-Saxon traditions. They merged together into Santa or Kris Kringle. The Dutch original is much, much older.

The present version goes like this: Sinterklaas (that’s were ‘Santa’ comes from) or Sint Nicolaas lives in a palace in Spain. No igloo in Nunavut for him! The lovable bishop travels once per year on a steamboat from Spain to The Netherlands, where his arrival is televised on all media and witnessed by all children. The mayor of the town welcomes him, and Sinterklaas makes a grand tour through the city. Your American Santa is a fat jolly man, always laughing ho ho ho. Our Sinterklaas is a Roman Catholic bishop. He’s a bit more formal than your Santa and certainly not overweight. He is dressed in full bishop regalia, including the pointy hat and the crucifer.

His arrival is always on the first Saturday of November. From that day onward, children are wildly exited. They don’t hang their stockings by the chimney, but place their shoe in front of the fireplace. Or central heating system, nowadays. Often with a bowl of water and or a carrot for Sinterklaas’ horse, which is named Amerigo. Always a dapple, and his name is always Amerigo. Why that is, I have no idea. Parents, as you already guessed, put some candy in the shoes. Sometimes little gifts as well. 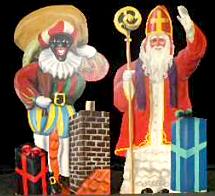 Sinterklaas is not (yet) an issue. But his helpers definitely are. Sinterklaas is always accompanied by jet black-Moorish servants, called Zwarte Piet(en) or Black Pete(s). Left-wing extremists — and that includes the full upper echelons of Dutch society — want to abolish Black Pete, for that is ‘blackface’ and that is ‘racism’. Or so the story goes.

Sheer ranting idiotic nonsense. As I said, our Sinterklaas lives in a palace in Spain. His black Moorish servants are dressed in 16th century fashion. That is the time of our national revolution, the 80 Years’ War against Spain. Why did Sinterklaas take up residence in Madrid? Well, at the time that was ‘far away’. About the same as your Santa living on the North Pole, but with much nicer weather. Our tradition, as we celebrate it now, has its origins in that 80 Years’ War.

Zwarte Piet is definitely not in blackface. First of all, most North European “santas” have black helpers. That is usually a depiction of the (tamed) devil. Until the last century Black Pete accompanied Santa on foot, with a bag of goodies and a bunch of twigs to chastise bad children. Once the bag was empty, Black Pete filled it up with naughty kids who had to do a stretch in the marzipan groves in Spain. Until WW2, Sinterklaas was accompanied by one Pete, or at best two.

The way we celebrate it now comes from 1945, courtesy of our American and Canadian liberators. The last winter of the war, 1944-45, was terrible. Very cold, and almost nothing left to eat. The only recorded mass starvation in a first-world country happened in Holland, and the results are even today studied among the descendants of the affected families.

So in October 1945, the mayor of Amsterdam asked the Canadian commander for assistance. Why, of course! We’ll be happy to do what we can, was the reply. Once the troopers were familiar with the story and the tradition, they went for it. Instead of one or two Black Petes, lots of Canadians dressed up, and clowned around. Everybody loved it. Before 1945, Black Pete was much more of a bogeyman. ‘Behave, or Black Pete will put you in his bag to Spain for a year!’ mothers used to tell their unruly children. From 1945 he became a friendly clown handing out sweets. 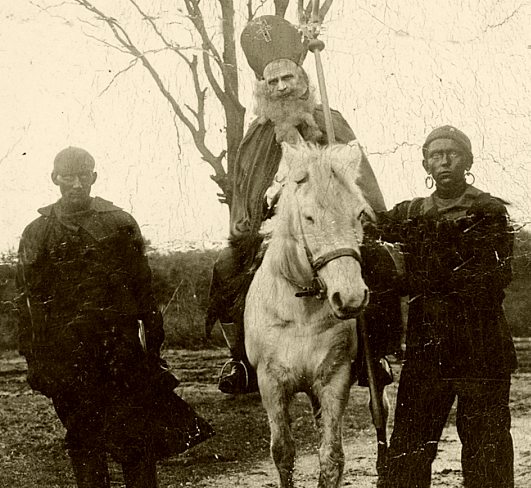 Let start with blackface first. What’s blackface? “Blackface is a form of theatrical make-up used predominantly by non-black performers to represent a caricature of a black person.” Very often to ridicule black people. However, this is mainly an American phenomenon. In Holland we didn’t have blackface. The number of colored people before 1975 (independence of Suriname) was negligible. Of course comedians sometimes made ‘racist’ jokes, but they do that also about Dutch, Belgians, Frisians and many more. Blackface as a stereotype is definitely not Dutch. Do you hear left-wing loonies whine if Alabamians are stereotyped with only two teeth, mother-sons and brother-sister-daughters? I think not.

Now for slavery. Again, it never existed in The Republic of the United Netherlands. Slavery was legally abolished in 1865. But… that applied mainly to the colonies. Before the full legal abolition of slavery there was no need to mention it specifically. Slavery was not legal within the republic. Once a slave was able to escape into the republic he was automatically a free man. In fact, an eastern potentate traveled with some slaves in his entourage to the republic. One of his slaves ran away. The potentate saw him in the next tavern grinning behind a large mug of ale. He furiously demanded his property back. Very sorry, apologized the town magistrates. We can’t do that. All we can do is ask him if he wants to return to you. If he doesn’t, we cannot make him. In Holland we don’t have slavery, only free men.

So our left-wing loonie activists lose out on history completely. We didn’t practice slavery nor did we practice racism. I fully admit that we (well, a few anyways) did do pretty well out of the slave trade, but that was outside the republic.

Now for discrimination. What is discrimination? Sort of racism. Deny someone certain rights based on certain characteristics out of their control. We aren’t exactly angels, but there is a big difference between discrimination and experience. In America you would do very well to cross the street in a poor neighborhood if you, in particular as a woman, are about to meet a group of young black men. That’s simply common sense. Chances are nothing will happen, but chances are there as well that you could get mugged or raped. Much of what is today perceived as discrimination is merely a personal preference.

Now you have a bit of background, and we can move on to current events. Left-wing activists are getting more and more violent and aggressive in their ‘non-violent’ protests. For them, it is not enough to be allowed to spoil the biggest children’s party in the country, with placards and banners. They want to enforce political correctness, and if possible do that with violence. Authorities, businesses and media do literally everything to accommodate them. Their merest suggestion is for them a command to be followed up immediately. “Non-violent” protests against Sinterklaas in 2016 led to 200 arrests. But… no convictions.

Now we fast forward to 2017. Last year. ‘Kick Zwarte Piet Out’ (KZPO) wanted to stage a “non-violent” protest during Sinterklaas’ arrival in Dokkum, in Friesland (Frisia) province. Mayor Marga Waanders of Dongeradeel, in which Dokkum lies, approved their democratic right to non-violently protest. However, Mayor Marga actually wanted a very violent protest. That would once and for all end all debate about Zwarte Piet. So she called the leaders of the neo-Nazi NVU (Nederlandse Volksunie) to give them an opportunity to stage a democratic protest as well. The NVU is a small fringe extreme group without any political representation whatsoever. Just a bunch of skinheads collecting their dole and cheering Hitler once in a while. Of course if NVU were to be there, extreme violence with left wing activists is a guarantee. Marga’s sneaky plan failed, as they declined.

KZPO arranged for an old derelict coach — no coach company wanted to rent them a new coach — and drove under police escort to Dokkum. Now, Frisians aren’t your average run of the mill Dutch. Don’t ever call them Hollanders, for they aren’t. They are Frisians, with their own gobbledygook language. Dutch, yes. Hollander, no. A lady named Jenny Douwes sort of wrote on Facebook that it would be a good idea to block the arrival of that coach. Lots of Frisians had already announced they would not tolerate political activism during the arrival of Sinterklaas.

Somewhere on the road Frisians blocked the arrival of that rickety old coach. The police were not able to remove them, and ordered the coach to back to Holland where it came from. But they took names and addresses of all demonstrators of this truly non-violent protest. The public prosecution announced they would no tolerate this form of vigilante justice and perversion of democracy.

That happened last year. The prosecution needed a full year to prepare a case. It wouldn’t be fun to sentence them in the off-season, what? Our prosecution is as politically correct as can be. Remember the Wilders trials. So they dragged their heels until last month. Then they announced that every participant would be indicted and for the maximum at that. Which is nine years in jail for blocking the highway. That kind of sentencing is extremely unusual in Holland.

That legal circus is now going on. The clown car is in full swing. Demanding nine years is of course outrageous for a non-violent protest. The prosecution demands community service of 120-240 hours or three months in jail. To give you an idea what kind of criminals usually get this:

That’s the Dutch prosecution at work. Personally, I would give all the above at least five to fifteen years in jail, at the very minimum. But we have to understand them. They are victims of circumstances, society, culture, religion.

But … when our prosecution gets the chance, they grab it. With both hands. You can do anything you want, provided you are politically progressive. If you are not, you’re a dead duck.

Kick Out Zwarte Piet has already announced this year that they won’t be planning non-violent protests. They want to get rid of Sinterklaas, no matter what.

To finish off this essay, something to ponder about. We do have a substantial Moorish minority in The Netherlands. Real Moors: people from Morocco, especially Berbers. Apart from very long fingers they also have very long (and sensitive) toes. If anyone has grounds to complain about Zwarte Piet, it’s them. They are professional whiners. Anything that can be milked for compensation is. But these professional whiners find nothing wrong with Zwarte Piet…