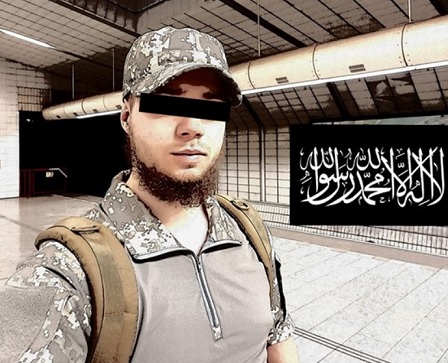 The Czech Republic recently arrested its first Islamic terrorist. The suspect is a young man who had allegedly been planning a bomb attack. There aren’t enough Muslim immigrants in Czechia to fill the slot for such a job, so a Slovak converted to Islam and became a would-be mujahid.

Many thanks to Margita for translating this article from the Czech news portal Zprávy iDNES.cz:

Jihad in the Czech Republic. Police accuse Muslim of preparing a bomb attack

The police have detained a radical Muslim. He had chemicals and bomb-making instructions in his flat. He is of Slovak origin and converted to Islam three years ago. He goes by the name of Abdul Rahman and is the first Islamic fanatic in the Czech Republic to be arrested by the police and accused of preparing a terrorist bomb attack.

“This country will be ours! And it cannot be for everyone!” The threats shared by Dominik K. on a social network site were at first sight disturbing. Especially from a young man who had converted to Islam, walked around dressed like a soldier and greeted with a raised right index finger, the symbol of allegiance to the fighters of the Islamic State.

Suspicions were confirmed when the criminal investigators searched his home. MF DNES has learnt that they found chemicals and bomb-making manuals, with instructions on how to attach them to the body and to cars.

The arrest was also reported in the Hungarian press. Many thanks to László for the translation from Origo.hu, and for the tip about the Czech article:

The Czech police have detained an Islamist terrorist

During the search of the flat of the young man the police found chemicals and a do-it-yourself description on how to make a bomb. The police accuse him of planned terrorist acts to be carried out by homemade explosive devices.

According to the Czech daily paper a man of Slovak origin converted to the Muslim faith three years ago and became an Islamic fanatic. He was actively involved in the internet community forums where he called for participation in the Islamic War of Jihad.

The Islamic State jihadist organization was his paragon.

This is the first time that an Islamist terrorist has been detained in the Czech Republic, reports Mladá Fronta Dnes.