Our Swedish correspondent Svenne Tvaerskaegg sends this report on the wave of arson jihad that has been sweeping through culturally enriched neighborhoods in Swedish cities for the last couple of days. In addition to his suggested YouTube search, I recommend searching for images and videos using the word “bilbrand” (car fire), followed by a the name of a Swedish city. You’ll find some amazing photos that way. 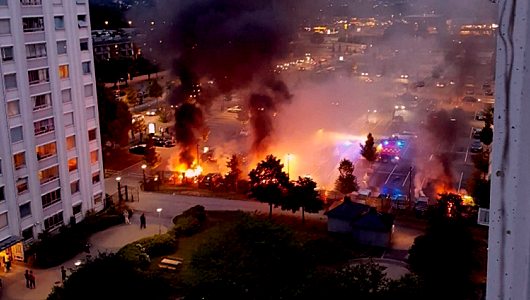 A wave of terror struck Sweden last night (August 13) as a series of co-ordinated arson attacks broke out simultaneously in towns and cities across the country. In what was described by Prime Minister Stefan Löfven as resembling “a military operation” gangs of black-clad and masked youths exploded flashbangs and torched cars in Falkenberg, Gothenburg, Helsingborg, Lysekil, Kalmar, Malmø, Trollhättan and Uppsala. Shocked Swedes stared from their bedroom and living room windows in horror as gangs of youths, described by eyewitnesses as “immigrants” and speaking the slang associated with immigrant ghettos, assembled in parking lots across the country and then, as if at a given signal, went on the attack. Car windows were smashed and firebombs hurled into vehicles, turning the evening sky bright red as cars burst into flames, sending plumes of smoke across towns and cities in scenes reminiscent of the Stockholm ghetto riots of 2013. Police and fire brigade services responding to the attacks were pelted with stones and flashbangs, hindering attempts to extinguish the flames.

Many Swedes filmed the carnage in parking the lots outside homes and high rise apartments and have posted graphic videos of the nights attacks on YouTube.[1]

This attack marks a serious escalation of immigrant violence in Sweden in its scale, martial-style co-ordination and precision as well as choice of target. Attacks with automatic weapons and hand grenades against police stations are not uncommon in Sweden, and many police stations are under permanent armed guard, but this time the attack was aimed at ordinary Swedes and their property. It is hard to understand what its purpose may have been. The Swedish general election is less than one month away and the attack is bound to win votes for the nationalist and immigration-critical Sweden Democrats party, something that would seem to be against the interests of the immigrant gangs who control the ghettos that surround just about all Swedish towns and cities today. But provoking ordinary Swedes and further polarizing Swedish society might well have been their purpose. There may be powerful Muslim fundamentalist elements in the immigrant ghettos who want to bring conflict to a head and provoke a civil war in Sweden.