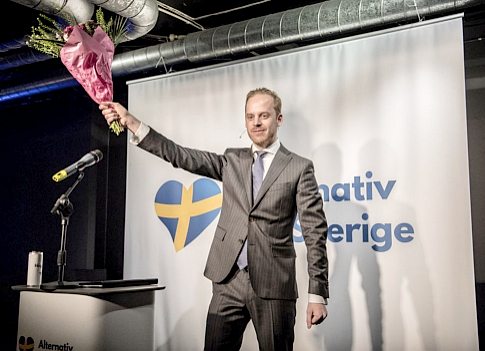 A new Swedish political party has just been formed. It’s called Alternative for Sweden (Alternativ för Sverige), and is an offshoot of the immigration-critical Sweden Democrats (Sverigedemokraterna).

This new party sounds very intriguing. It coalesced around the leadership of the Sweden Democrats’ former youth wing (Sverigedemokratisk Ungdom), which was excised from the parent party for being out of step with its principles.

See the comments section on Monday night’s news feed for extensive links to articles and videos, with machine translations of some of the articles, which were kindly posted by one of our Swedish readers.

Our Danish correspondent Anne-Kit has translated the party’s launch video for subtitling. She includes these remarks:

I read about Alternativ för Sverige yesterday in Snaphanen [Danish]. The only English-language article I know of so far is one from BuzzFeed. This is obviously a negative article with lots of assumptions, lies and exaggerations. The interview on Snaphanen is extremely interesting.

The party leader, Gustav Kasselstrand, was previously leader of the Youth Wing of the Sweden Democrats. Ingrid Carlqvist likens him to a young Donald Trump.

35 thoughts on “An Alternative for Sweden”