Below is a report by our Dutch correspondent H. Numan on the latest from the lurid soap opera that is Dutch politics. 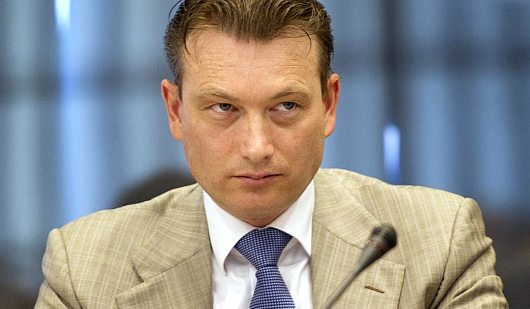 Dutch cabinet got its first gash

The new Dutch cabinet Rutte III dropped its first piece of ballast from its balloon. Or you might say that Zr. Ms. Rutte III got its first big gash. Minister for Foreign Affairs Halbe Zijlstra had to resign.

Who’s Zijlstra, and what did he do? Halbe Zijlstra was the VVD (conservatives) party whip in the cabinets Rutte I and II. He was rewarded for his hard work with a cabinet post, and an important post at that: foreign affairs. The problem was that Zijlstra didn’t have a lot of diplomatic experience and never worked in anything remotely close to ministerial level. So… he made it up.

A few days ago questions began to surface in the news about the veracity of those words. Zijlstra went on the defense and later on had to admit he made that story up. And became the laughingstock of the country. Lots of memes may be seen on the (Dutch) Internet in which Zijlstra is present at world-famous occasions.

Parliament wasn’t satisfied with his explanation, and wanted a vote of no confidence. Mark Rutte tried half-heartedly to save him. To no avail. Before parliament could ask for the motion, the minister resigned. With tears in his eyes.

D66 Minister Sigrid Kaag (foreign trade & development aid) — that’s the one who is married to a Palestinian and without permission donated $60 million to the Palestinians — will take over, temporarily.

That’s not really good news. Kaag is not merely ‘against Israel’. She’s virulently anti-Semitic. Not really a surprise, for someone marrying a Palestinian, what? What worries me more is the way she thinks she can spend the public purse. Now she can do that on two ministries… As she sees fit, do remember that. That’s very dangerous. It’s hushed up a bit, but her donation of 60 million dollars to Hamas wasn’t stopped by the rest of the cabinet. That makes it official government policy. In other words: as a response to Trump’s freezing of support for the Palestinians, the Dutch government tossed a big bag of money to Hamas, to make up for it. That’s not what a trustworthy ally should do, is it? I’m pretty certain the Israeli government in Jerusalem doesn’t like it either. Those things can come back to haunt you, sooner or later. Trump won’t forget it, and neither will Netanyahu. This little thing is too minor to even mention, but it will be noted.

Geert Wilders asked for a vote of no confidence for the entire cabinet, but that didn’t pass. That was expected. What was not expected was that most of the opposition supported his motion: 43 ayes.

In March we have municipal elections. The PVV will participate in 30 cities, for the first time. Up till now they have only been represented in The Hague and Almere. You don’t hear a lot about the PVV or Geert Wilders, but there are many reasons for that.

First of all, the PVV has the smallest budget of any political party in the country. You can’t join the PVV, only support it. That invalidates public money. If you don’t know: all political parties voted somewhere in the 70’s to get money for free. There are some limitations, but the main one is that you must be a vereniging (society). The PVV is not; it has only one member: Geert Wilders. That’s why they have very little money.

Second, as you know, all media — none exempted — report only bad news about the PVV. They only report positive news if it can’t be avoided. Like today with this vote of no confidence. And finally: Geert Wilders is under 24/7 protection. He simply can’t go where he wants when he wants. That makes campaigning very difficult.

However, Rutte III is now in serious trouble. It is a majority cabinet: one seat is a majority. But the smallest possible. That only works if times are smooth and the government is very popular. This one is anything but. And the times aren’t smooth either. The Dutch economy is booming, but wages aren’t. Because taxation goes up, not down. Recent economic research showed that the average Dutch income over the last 40 years went down. At best an average- or low-income worker earns the same as he or she did in 1980.

The cabinet partner D66 have their own little scandal: party leader Alexander Pechtold accepted a bribe. He was given a small condominium in the beach resort Scheveningen for supporting the CETA treaty.

Now, Pechtold is the mortal enemy of Wilders. If Wilders gets a postage stamp as a gift and forgets to declare it, Pechtold is out for his blood. Then it’s open policy, clear accounting, politicians don’t have privacy. That sort of thing. But this condo was a private gift and he’s keeping it. Because it’s private. Parliament, which doesn’t like Wilders, agrees.

So in March municipal election will take place. I’m absolutely certain both these affairs will have serious political influence. Pechtold can keep his hut (that’s what it is: a small very upscale apartment of 50 square metres specifically made for that purpose). His party will pay the price. So will Rutte. Both parties won’t lose on a national level, but their support locally will crumble. On the other side the PVV will finally get off the ground at the local level.

I’ve said it before: this cabinet won’t last long, because it can’t last long. That doesn’t mean to say that the next cabinet will be a PVV cabinet. Regrettably, my worst nightmare is coming true. The longer we postpone solving the islam problem, the worse it will get. It will become very bad, I’m afraid.

5 thoughts on “Dutch Cabinet Got Its First Gash”